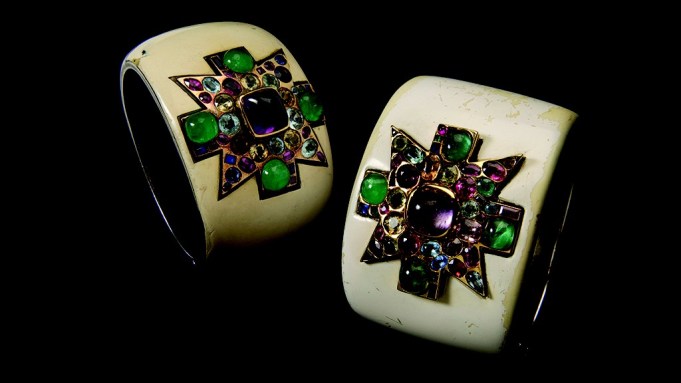 Fulco di Verdura’s early attempt at a career in fashion wasn’t a success, but that didn’t matter because his employer, Coco Chanel, sensed early on that the arch and irreverent Sicilian aristocrat was a born jeweler.

A sole operator whose brand name never soared to the heights of Cartier, Tiffany & Co. or Harry Winston, the Palermo, Italy-born, New York-based duke was nonetheless the go-to jeweler for Hollywood actors, socialites and royals from the Thirties through the Sixties.

His devotees included Greta Garbo, Marlene Dietrich, Lauren Bacall, Babe Paley and Brooke Astor as well as the Duchess of Windsor and Princesses Margaret and Diana.

An aesthete with a tremendous sense of confidence and a taste for rebellion, Verdura loved nothing more than mixing a cocktail of high and low when designing his jewelry.

Like his friends Chanel and Cole Porter, Fulco Santostefano della Cerda, Duke of Verdura, challenged convention. Like them, he channeled his talent, fabulous taste and sense of mischief into his creations, turning 20th-century high jewelry on its head.

Later this month, the owner of Verdura plans to mark the 75th anniversary of the opening of the Verdura salon on Fifth Avenue with a major exhibition, curated by Carolina and Reinaldo Herrera and their daughter Patricia Lansing. “The Power of Style: Verdura at 75” will run from Oct. 14 to Dec. 23 at 745 Fifth Avenue, next to Verdura’s current salon.

“He changed the look of 20th-century jewelry, and he did it quickly,” said Ward Landrigan, a Sotheby’s veteran who purchased Verdura 30 years ago, realizing a long-held dream. “The story of his importance has never really been told. He wasn’t a public man, and he didn’t like the press. He didn’t care about money, and he never had a lot of it. He was an artist.”

The show features more than 200 jewels — on loan from owners around the world — that underline the whimsy and irreverence of the man who never studied gemology and who arrived in late-Twenties Paris as an aspiring painter.

“He really knew how to incorporate his wit, taste and personality into his jewelry,” said Carolina Herrera, who has been wearing Verdura for decades and knew the designer personally. She said there was always an element of surprise in his designs, “whether it was the use of a beautiful color or the unusual shape of the jewel.”

In the early Thirties and heartily encouraged by Chanel, who originally had hired him as a textile designer, Verdura swapped the traditional platinum and white-metal settings of the era for gold. He was fearless in mixing precious and semiprecious gems, worked enamel into his designs and, in some cases, even made jewelry out of the shells and crystals he came across in the gift shop at the American Museum of Natural History in New York.

Such was his love of design — and disdain for show-offish jewels — that he referred to solitaire diamonds as “swimming pools” and once, after he spotted a woman at a dinner party wearing a gigantic sapphire ring, whispered to a friend, “Mineralogy isn’t jewelry!”

Following a trip to Ravenna, Italy, to see the Byzantine mosaics, Verdura mimicked the look of the glittering tiles, pressing a rainbow of semiprecious stones into gold to make cuffs for Chanel and brooches for Diana Vreeland. He eventually would collaborate with Salvador Dalí on the first surrealist jewelry, transforming a series of the artist’s miniature paintings into jewelry.

Painting remained a lifelong passion — as did the natural world — and his colorful, patterned and textured jewels reflected that. He created, for example, elephant and fish brooches out of Baroque pearls; a lineup of gleaming cigarette boxes to mark the opening of Porter’s shows (Porter originally helped him set up in business), and a tiara inspired by a Native American feather headdress.

He elevated the banal to the coveted, using ropes, knots, coins, bamboo and tassels as motifs in creations that would go on to be copied by many a 20th-century jeweler.

“He made things that he regarded as beautiful and wasn’t constrained by a need to make something big or small or pink or blue,” said Harry Fane, the London-based vintage watch and jewelry dealer who represents Verdura in London.

“Fulco came from an educated, aristocratic background and was used to being in a rich, art-filled environment, and that gave him a confidence. And he had a natural ability to understand what his customers wanted,” said Fane, who has worked closely with his longtime friend Landrigan since the latter purchased the company.

“Most [jewels] are bound within their era. What I find constantly fascinating is that 90 percent or more of what Fulco made is timeless,” Fane added. Herrera said Verdura’s jewels also had a simplicity to them. “This is why his work was enduring and has been copied by so many great jewelers since the late Thirties.”

Landrigan was adamant that “The Power of Style” not be a selling show. “Nothing is for sale. We wanted to hold ourselves to museum standards,” he said.

That decision should come as no surprise: Landrigan, together with Fane, has protected the brand since he purchased it in the mid-Eighties. Landrigan started to sell the jewelry, which is produced by Italian workshops, outside the salon only in 2000, first at Bergdorf Goodman and now at Neiman Marcus and a clutch of other jewelers, too.

Landrigan’s Verdura is just as much about the future as it is about the past, partly thanks to the creator himself. Although Verdura’s jewelry output waned as the Sixties bohemian aesthetic took hold, he never gave up on his art. Verdura was always known for drawing his jewelry designs with great detail, and, in later life, he focused on making miniature paintings.

When Landrigan bought the company, he inherited more than 10,000 jewelry drawings by Verdura that took him three years to archive. So far, he’s made about 500 of them. Landrigan said he regularly sits down with his son Nico, the company’s president, and the two look through the drawings, asking themselves, “What would work on today’s women?”