Exhibitors were energized by the five-day event as exports of Italian jewels grew 1.9 percent in the first three months of the year.

VICENZA, Italy — The market’s uncertainty and instability and geopolitical tensions couldn’t slow down the run of the five-day jewelry trade show VicenzaOro.

“VicenzaOro is undoubtedly the only trade show with a real standing on the Italian scene,” remarked Guido Damiani, president of the Damiani group, echoing a sentiment shared among exhibitors at the fair, which closed Sept. 11. “They were forward-looking in attracting big-ticket names like ours.”

The international appeal of VicenzaOro was confirmed by the growing number of foreign buyers. This September, Middle Eastern and U.S. visitors were up 23 and 22 percent, respectively, while Asian buyers rose 18 percent. The total amount of European attendees, which account for 59 percent of the total, was stable compared with the same edition last year.

“There was a sense of sharp optimism,” noted Marco Carniello, director of VicenzaOro jewelry and fashion division. “The market had some shadows, but the number of international visitors confirmed our positioning. Buyers come here to find the best in terms of technology, products and trends.

“We’re not interested in becoming the biggest fair globally, but we can certainly pride ourselves on being among the best ones,” Carniello added, noting the trade show has evolved to become a platform providing guidelines to the sector via talks on sustainability, digitalization and global trends in addition to business opportunities.

“The jewelry sector has dramatically changed over the past few years and trade shows remain important occasions especially for small-and-medium sized enterprises, which cannot invest in marketing and communication,” noted Roberto Coin, president of the namesake, Vicenza-based company.

According to data provided by Confindustria Moda and Federorafi, in the three months ended March 31, exports of gold and jewelry grew 1.9 percent to 1.5 billion euros. In particular exports to the UAE jumped 37.8 percent in the first quarter, while Hong Kong and the U.S. increased 8.3 percent and 2 percent, respectively.

“Our industry is sensitive to any event projecting uncertainty, but this is a moment in which ‘resilient’ raw materials are having momentum,” explained Andrea Visconti, co-chief executive officer and vice president of the Giorgio Visconti label. “Soaring prices for gold have cast hope, as they prove that buying jewelry pieces crafted from gold and natural diamonds is still a good investment.”

Pink gold as well as precious gems in rainbow colors were among the key trends at the fair this season, which traditionally attracts buyers and visitors stockpiling pieces for the upcoming winter holiday season. Elsewhere, traditional styles injected with playful touches catered to an increasingly younger audience.

A growing number of foreign buyers visited the Damiani booth, located in a dedicated showroom space displaying the collections of the namesake brand in addition to those of Salvini, Bliss and glassmaker Venini, controlled by the Italian group. 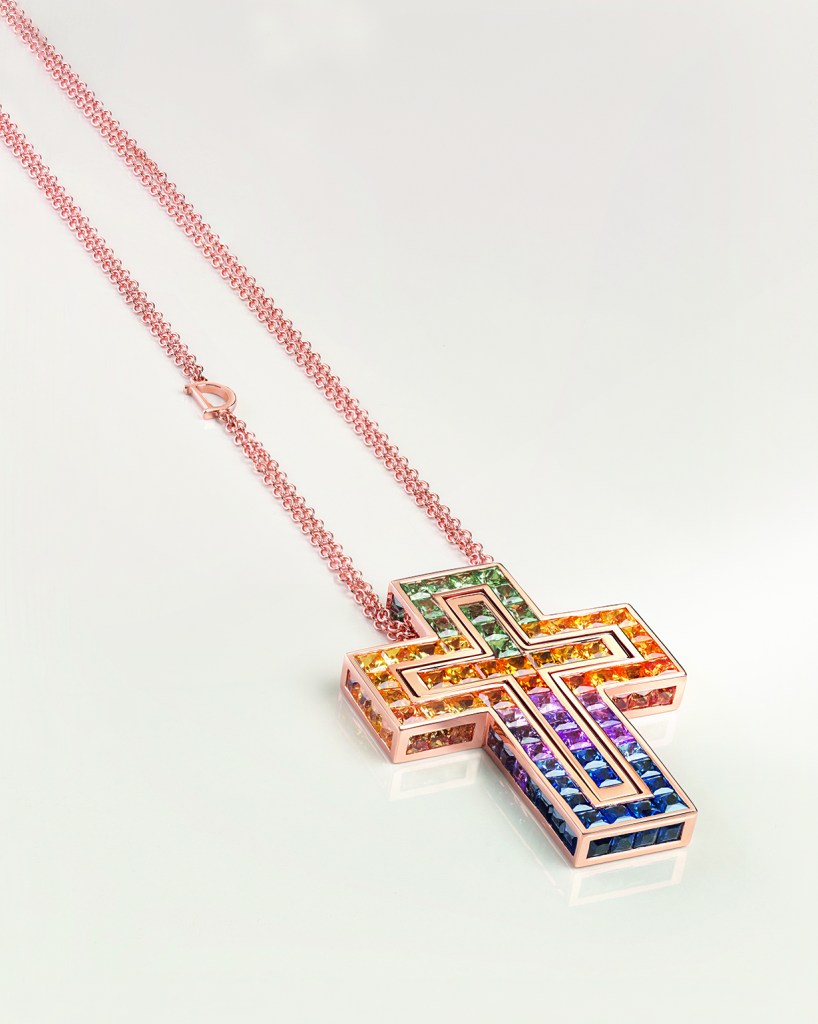 Marking the 95th anniversary of the company, Damiani unveiled a style of its signature Belle Epoque cross pendant necklace featuring rainbow-colored sapphires mounted on pink gold hardware. Additionally, two versions with rubies and blue sapphires on white gold were presented at the fair. “We’re strengthening our timeless segment, given that in the current context our customers are more conservative design-wise,” noted Damiani.

For its Salvini label, Damiani said the group is gearing up to expand its men’s offering, especially in Europe, where the category has been traditionally less appealing than in Asia.

“Despite complex macroeconomic trends, the business is increasing especially thanks to a range of investments in our commercial department,” he said.

The group’s president also took the time to elaborate on the company’s delisting, which was successfully completed on April 26. “Not much has changed, for sure we have reduced some costs linked to the Bourse, but we actually didn’t need a change in our strategy,” he noted. “We were living in a state of uncertainty, hence our decision to avoid the volatility of the markets especially because Italy is an underappreciated one. The international appeal of the country is losing ground,” he said, adding that in his view, the country’s recently appointed government benefits from the trust of international markets.

Damiani said the company is looking at new investments, especially to expand its retail network beyond the Rocca retail chain it fully acquired in 2008. Ahead of the trade show, the group revealed it had finalized the acquisition of the former exhibition center Palafiere in Valenza for 10 million euros, with the goal to turn it into a new production pole to bow in 2022. The acquisition falls amid a new industrial unit of third-party manufacturing unveiled this year.

“We offer multiple advantages in addition to our expertise and know-how: the connections we have with other players in the [Valenza] district, as well as the fact that we are on the market [as a brand], meaning we know it and can provide advice to our clients,” said Damiani.

Although Italy still represents the company’s most relevant market, Asia — especially Japan and South Korea — are growing, the latter country in the high-single-digit range, while a new commercial partner in the U.S. is expected to bring in business opportunities in the region, according to Damiani.

Coin’s president pointed to a shift in final customers’ purchasing habits as one of the reasons there are new and higher benchmarks for Italian companies. “This year we’re already above our expectations of growth, we’re constantly working with the aim to offer new and avant-garde products and services,” he said. Among the 60 countries where the brand is available, the U.S., the UAE and Russia represent Roberto Coin’s top markets.

Catering to a range of customers, the label expanded its signature Art Deco lineup of 18-karat pink gold and diamond bangles, rings and necklaces featuring a tassel-shaped pendant, which came with new colored stones, including malachite, turquoise and mother-of-pearl, in addition to the signature black jade. 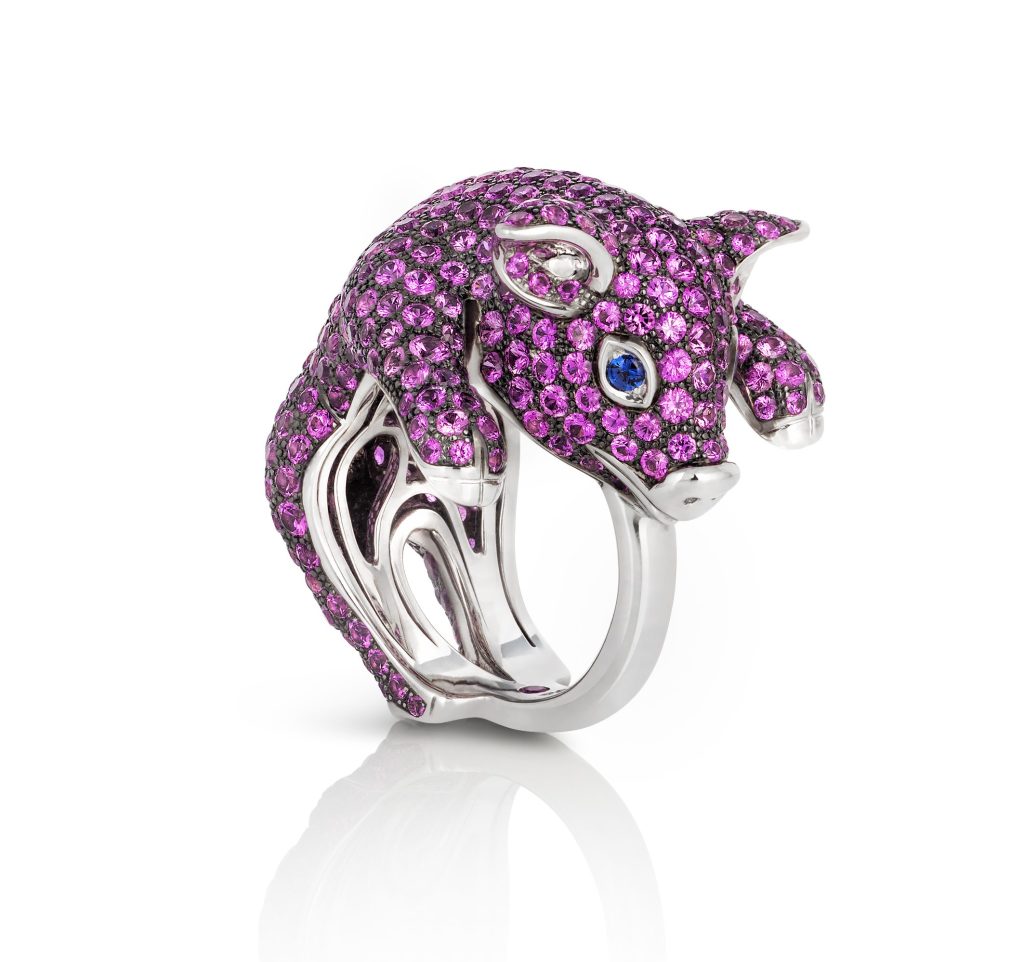 More flamboyant and playful styles from the Animalier range nodded to the Chinese zodiac and included a pig-shaped ring covered in pink sapphires on burnished white gold hardware.

“The final customer has changed a lot in terms of geographies and tastes. The younger generations look for refined products with precious details and high-quality stones,” explained Visconti, noting the Chinese market is particularly appealing although harder to penetrate. In the six months ended June 30, the company saw a 20 percent increase in sales year-over-year, casting hope for its revenues in 2019. 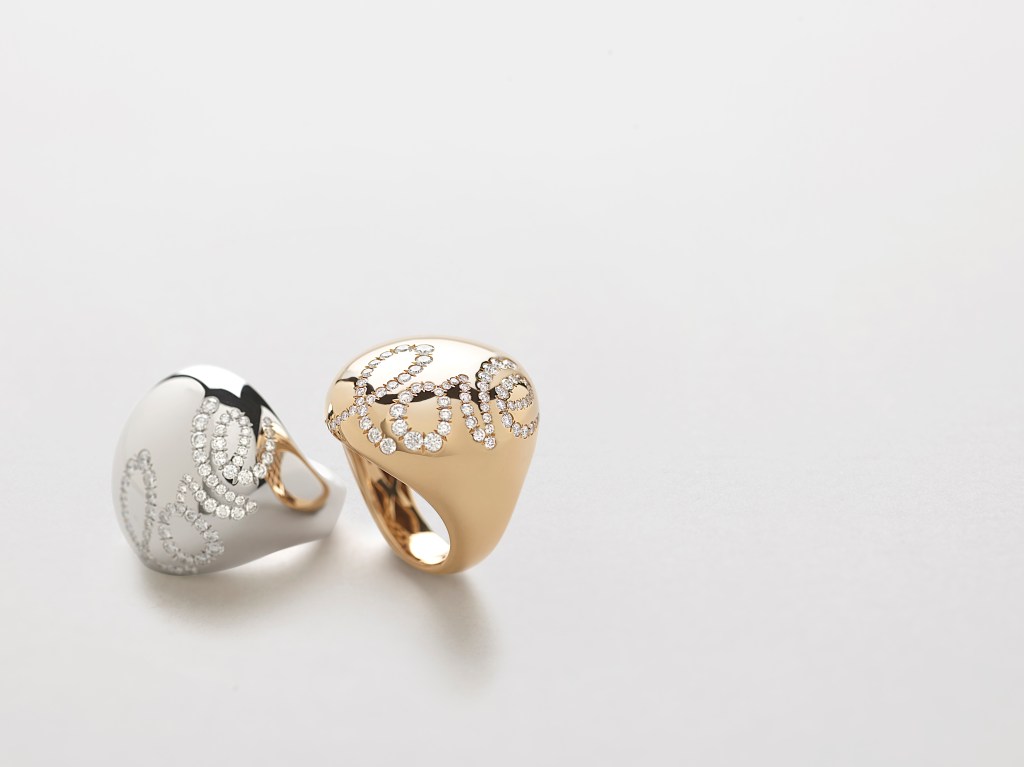 Signaling a new focus on younger customers, Giorgio Visconti unveiled its latest ad campaign featuring a girl-next-door captured in daily and more intimate gestures than in seasons past. The Vie Privée collection featured rounded 18-karat gold rings punctuated with white diamonds in the shape of the “love” word or juxtaposed haphazardly on a thick band style. Scarf-shaped enveloping rings featured the volcanic kologon stone, as well as black onyx, framed by tiny diamonds.

Capri-based jewelry label Chantecler returned to the exhibition this season, installing a booth located in a secluded area of the fairgrounds. “We’re first and foremost an Italian brand, foreign markets are yet to be fully explored,” said the company’s export sales manager Layla Bellezza, adding the brand is particularly banking on the Middle East and the U.S. via the wholesale channel. On the retail front, the company operates three flagships, in Capri, Milan and Tokyo.

The manager was upbeat despite geopolitical tensions. “We’re not a mainstream brand, so macroeconomic fluctuations do not affect us that much. We’re small and nimbler, that’s probably our strength,” she said.

Nodding to the festive Dolce Vita aesthetic of the Mediterranean luxury destination, Chantecler expanded its best-selling Paillettes lineup with earrings and necklaces with a cascade of the line’s signature confetti-like details covered in diamond pavé, especially to tap into “certain foreign markets while still catering to women’s need for playful jewels,” said Bellezza. 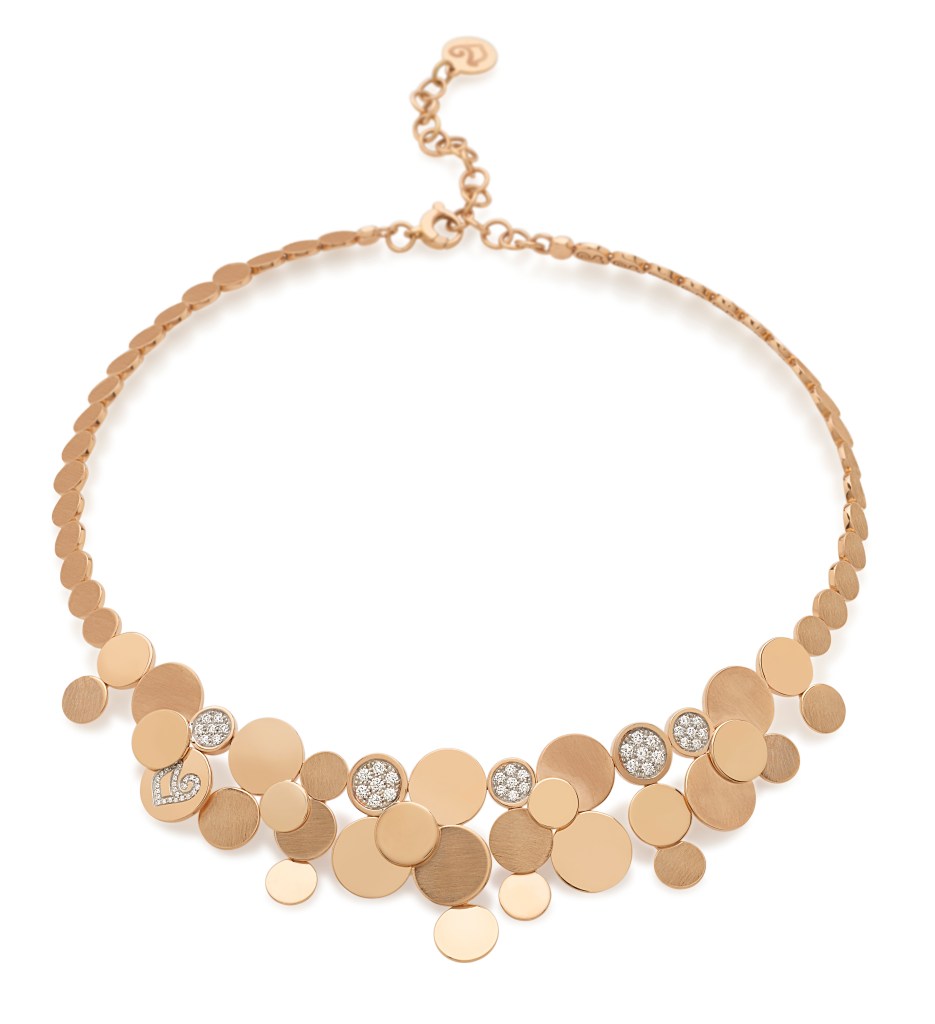 Within its high-jewelry line, including one-of-a-kind pieces and items produced in very limited quantities, the Italian label presented new iterations of its signature bell pendants, which featured Capri’s landscape hand-painted by local goldsmiths and artists on a gold base. Additionally, a necklace made of titanium and burnished gold was covered with black-and-white diamonds, while yellow sapphires hung on the front.

Paris-based antique art dealer-turned-jeweler Lydia Courteille returned to the fair this season energized by her first experience here in January to present her flamboyant and over-the-top creations. Inspired by Paris’ glamorous nightlife, Courteille worked a range of references, spanning party attire, Chantal Thomass lingerie (she provides jewelry for the brand’s catalogues), as well as the “Leda and the Swan” tale from Greek mythology for her La Vie En Rose lineup.

Among the standouts was a 360-karat cuff bracelet referencing the Greek myth, featuring a morganite stone engraved with the portrait of Leda and mounted on swan-shaped titanium hardware covered in pink sapphires and black diamonds. They also appeared on a more approachable ribbon bracelet and 18-karat pink gold pendant earrings reminiscent of the Eiffel Tower with drops of pink morganite.

Courteille’s penchant for all things French was also tangible in her Marie Antoinette collection, rich in aquamarine gems nodding to the color of Versailles’ rooms. For example, a reproduction of the French queen’s head appeared as a pendant on a one-of-a-kind necklace.

A master in storytelling, Alessio Boschi animated the Design Room area with his art-level creations. The Italian jewelry brand, which relocated to Bangkok six years ago, specializes in artisanal, exclusive pieces in signature shapes that reference botanical elements, animals and works of art.

“I like challenging myself and telegraphing the Italian attitude, as well as our impressive level of craftsmanship,” said the jeweler. “Jewelry is a minor guild not only a business activity; I always try to tell a story.”

A complicated treasure chest-like ring called Medusa featured a range of engineered and artisanal techniques, including a Roman-style micro mosaic depicting the head of the mythological character created by artisan Roberto Grieco. The little mosaic was nestled inside the ring under a portrait-cut hexagonal diamond and could be removed and placed inside a pendant necklace carved from fossilized wood shaped as a baroque frame. On the ring, baguette-cut Colombian emeralds in the shape of snakes’ bodies were juxtaposed on the shanks, punctuating the precious object. 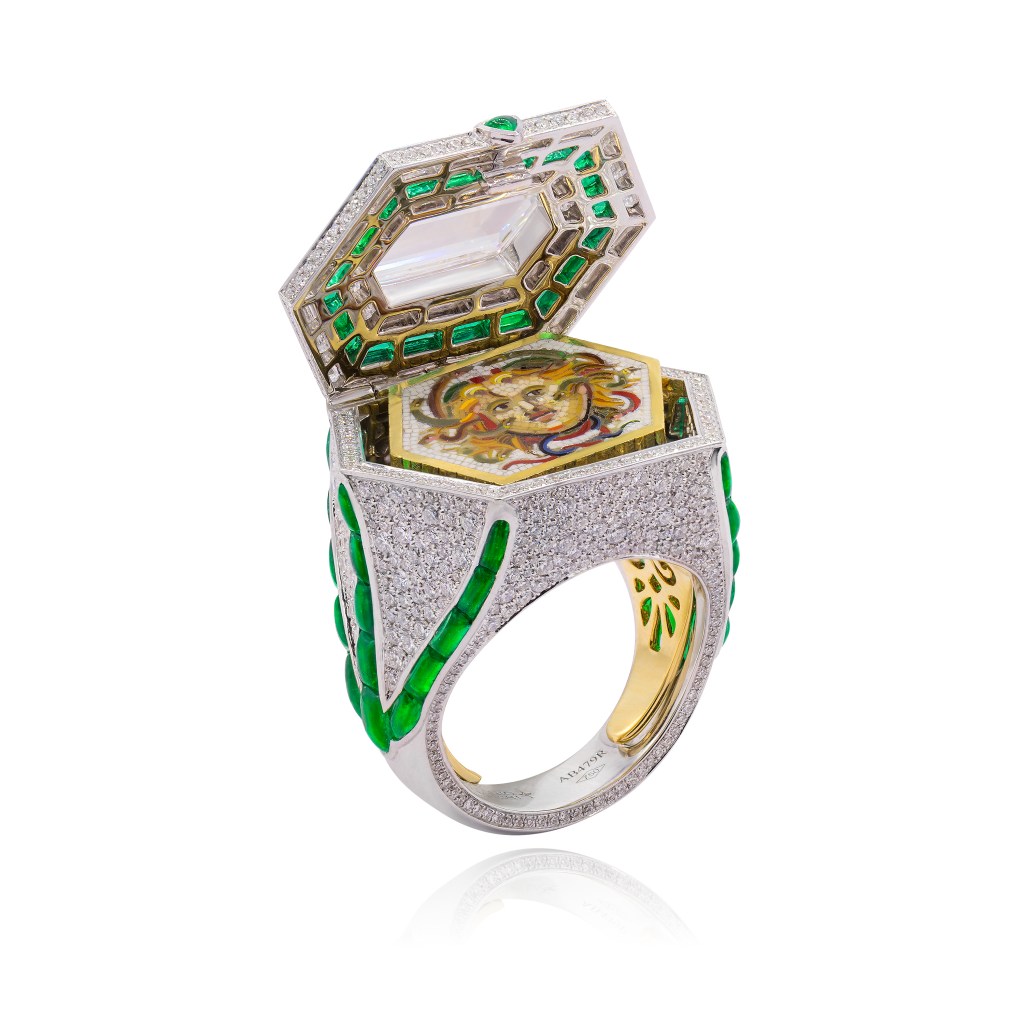 Architectural landmarks from Iran were also a source of inspiration for Boschi’s Seven Princess collection in which geometrical styles covered in pink, purple and blue K-cut sapphire stood out.

Valeria Boschi, marketing and finance manager of the company, praised the fair’s September edition. “We’re very pleased with the organization, the attention and the trade show’s ability to welcome us. It brings in a lot of visibility,” she said while acknowledging “Italy is probably not our biggest market, due to our high price range, while China and Cyprus are growing year-over-year.”