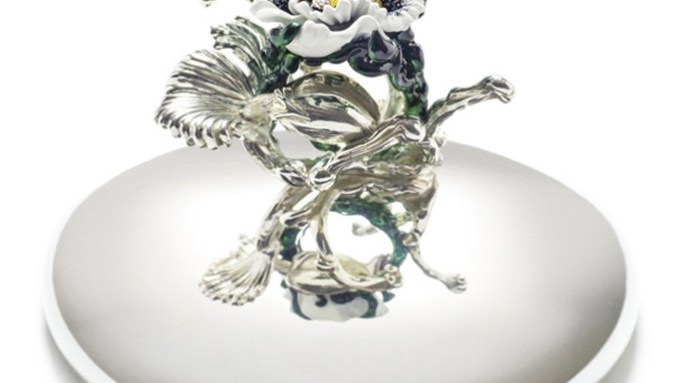 Her first London show, “animalvegetablemineral,” opens today at Gagosian Gallery on Davies Street in Mayfair, and runs through Saturday. Next month, it moves to Gagosian on Madison Avenue in New York, where it will be open from March 12 to April 5.

“Animalvegetablemineral” builds on Fleurs d’excès, de Castellane’s collection of undulating, sculptural jewels also inspired by the natural world, which made its debut in Paris in 2011. “These are the babies of those designs,” said a cheerful, black-clad de Castellane during a walk-through of the Mayfair show.

“These designs are about the energy of life, and how the masculine and the feminine live together,” said the designer, adding that many of the jewels are inspired by feminine curves. “You can find a lot of life in curves — and in the contrasts they create.”

Color plays a starring role in this collection: A midnight-blue lacquer snake curls around a sparkling dark opal, and that same opal has been studded with flat diamonds meant to mimic the surface of water.  Sapphire and ruby flower rings come in bright candy colors, while gold flower petals on other rings have been given a slick of Pop Art pink or green lacquer.

As with Fleurs d’excès, these jewels are displayed on sculptural stands that are works of art in themselves: Lacquered gold snakes slither around matte silver rocks, while blossoming flower rings rest on curling leaves, and diamond jewels sit on sparkling silver cube clusters whose shapes are meant to mimic those of minerals.

Louise Neri, a director at Gagosian, said de Castellane is interested in artists such as Jeff Koons, Takashi Murakami and John Currin — and her creations are a reflection of that. “She has a punk quality to her work — just look at those lacquers in electric colors.”

De Castellane, who has served as creative director for Dior jewelry since 1998, did not draw the jewelry designs for this show, but made wax sculptures instead. As for the bases, some were created on 3-D printers and later cast in silver, while others are made from sand-cast silver.

The designer said it was important for her to make interesting bases for the jewelry, partly for philosophical reasons. “When you don’t wear jewelry, where does it go? It’s a pity that it’s not on display. I wanted to give it another life.”