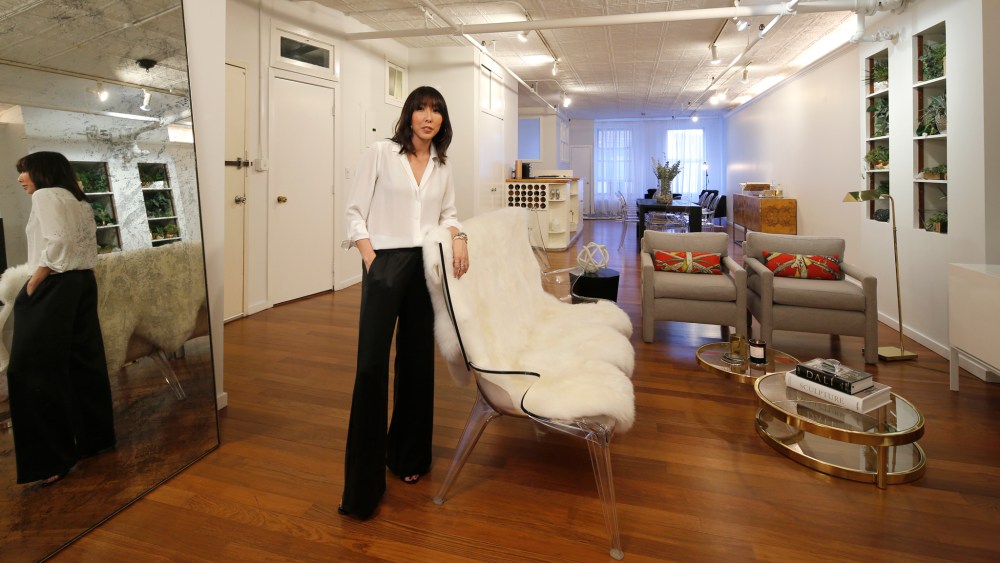 The California native recently left the Golden State, and took her jewelry brand east, setting up in a spacious SoHo loft.

While anyone who has moved to the city knows, navigating Manhattan real estate is hardly easy, but for Sakai, it was a fortuitous move. “I used StreetEasy and the broker e-mailed me back and said, ‘I’m such a big Vita fan — I have a Titan [bracelet] on now,’” she said.

Forty-five days into the lease, Sakai is settling into her new office, which operates as the base of daily Vita Fede operations for about six full-time employees.

The 2,300-square-foot office space was outfitted by interior designer Amy Courtney with a mix of vintage pieces from Milo Baughman, Hermès and Bertoia, as well as more modern pieces from the likes of Kartell, Mitchell Gold, ABC Carpet & Home and Restoration Hardware. Sakai anticipates keeping the office space in the loft for six to eight months.

Vita Fede is in more than 265 doors and 30 countries, with international sales growing 65 percent, year-over-year. The decision to move to New York is a strategic one, which comes six years after the brand’s official launch in 2009. “New York is a fashion capital and we really want to grow a brand,” Sakai said. “The goal for Vita Fede is to become a lifestyle brand. New York seemed to be the place to do that. [Public relations], sales, creative — you just have such a great blend of people here and you get the highest of everyone.”

Despite her move, Sakai plans to keep the brand’s L.A. headquarters — which runs production, shipping and accounting — up and running for the foreseeable future. “We wanted to move the front end of the company first,” she said. “The creative, marketing and p.r., that side is what is moving the brand forward. I have people I trust to run the back-end, and there is a nice flow. But, creatively, you really need to be in the market, talking to buyers, seeing the windows.”

The move has already seen results, the designer said, with a Vita Fede window display in the Saks Fifth Avenue windows popping up just last week. The brand has also been moved from contemporary to fine jewelry within the stores’ floor — a move they hope will become widespread across all doors. “Everything is handmade in Italy, and the craftsmanship is built, like, fine,” she explained.

Beyond the core collection of women’s jewelry, Vita Fede recently expanded into men’s and hair accessories, with a new category planned for 2016 that Sakai will only describe as “revolutionary and first in market,” adding, “as a young company, it’s important to think outside the box.”

Looking to 2016, Sakai said opening the first Vita Fede retail store is in sight, which will, naturally, be based in New York. In the next two weeks, the brand will relaunch it’s Web site, where e-commerce attributes about 15 percent to the brand’s overall sales. New features include a monogram shop, where customers can have signature pieces engraved, and editorial features, including a travel blog written by Sakai.

“It’s nice for the end consumer to see that there is a real human out there behind the brand,” she said. “People don’t realize that you are exactly like them — you just have a different job.”