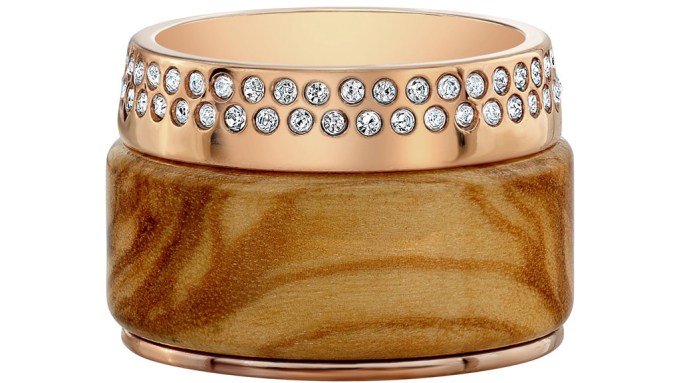 LOS ANGELES — For Cynthia Sakai, the founder, owner and designer of accessories brand Vita Fede, the barometer for success can take many forms.

If she were to use Web analytics, a recent search for her five-year-old brand on Alibaba’s e-commerce platform Taobao spews 23 pages of results, many of which Sakai claimed are counterfeit. Going by celebrity endorsements, she can point to the support of Nicole Richie, who, years earlier, funded Sakai’s start-up when the starlet hired her catering company for a house party. Via social media, her $1,565 choker lined with Akoya pearls sold out in 24 hours in late August, after Neiman Marcus posted a photo on its Instagram page. By annual revenue, her Los Angeles-based company, which employs 23 people locally and four in Florence and operates a showroom in Milan, generates sales of under $50 million, according to industry estimates.

Sakai is on a path for growth. This holiday, she’s branching out to $295 velvet-lined jewelry pouches that are covered in rainbow-colored snakeskin. She’s also revamping Vita Fede’s Web site so customers can upload photos of themselves wearing the jewelry. By the end of next year, she anticipates standing in her first freestanding store, either in Los Angeles or New York, decorated in a modern but classic palette of black and gold. Then, in 2016, she may introduce handbags.

“We’ve been doubling our business each year,” she said.

At 32, Sakai is already a serial fashion entrepreneur. She started her first accessories line, Girl Boy by Koco, in 2000 with tampon cases and makeup bags. Five years later, she represented contemporary clothing lines in her own showroom in downtown L.A. She concocted the concept for Vita Fede after another showroom owner gave her a snakeskin bracelet as a souvenir from a trip to Italy. Reasoning that she could turn the trinkets into a fashion business, she hopped a plane to Italy to line up factories. In her first season, she sold 10,000 units of the $55 bangles at retailers including Saks Fifth Avenue, Bloomingdale’s and Fred Segal.

In her collection for next spring, Sakai’s offering $450 bands that wrap fingers in ebony wood and pavé crystals, $1,750 necklaces that dangle a tube of tiger’s eye, mother-of-pearl and onyx and $250 semicircle-shaped rings shaped that slip on just at the tip and accentuate the wearer’s nail art with a row of crystals. She also makes sure not only to offer different sizes to fit both petite Asian customers and men but also, when plating the brass base, to use five times more precious metal than other costume jewelers.

“When I first launched the line, I never wore costume jewelry,” Sakai said. “I wanted something I could mix with my fine jewelry, something that had a little trend but was classic and had quality.”

Sakai stacks Vita Fede bracelets, rings and necklaces with her own delicate pieces, such as her grandmother’s diamond bands that loop around one of her thumbs and a ring picked up at a Paris flea market. “I want to wear it the way real people wear it,” she said. “It’s not realistic to buy everything Vita Fede.”

The urge to connect with customers helped Sakai to expand her business, primarily through technology and social media. She linked with influential bloggers early on and, unlike some competitors, never had to pay them to don her pieces. She personally posts all the photos on the brand’s Instagram feed and responds to the queries of her some 159,000 followers. This year, she broke into the nascent field of wearable technology with $1,100 necklaces that embedded a flash drive in Swarovski crystals, hand-carved lapis, malachite and onyx.

“There will be more tech from Vita Fede,” she said. “The higher your price point, you have to create fans. The social media plays a big part of it. Going forward, brand loyalty is really important for brands. Without that, we’re not going to grow.”