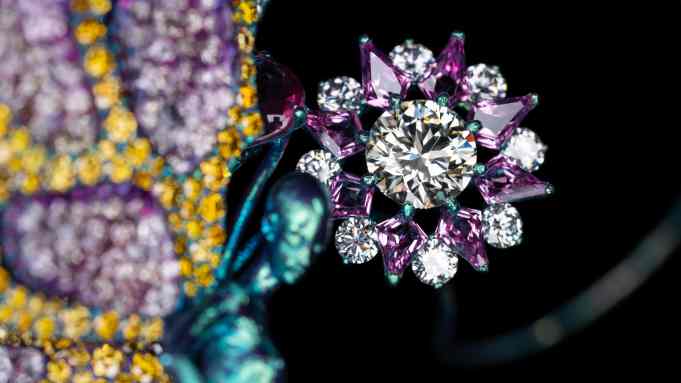 HONG KONG — “I don’t have a lot of discipline,” confessed master jeweler Wallace Chan, while speaking at the Christie’s Gallery in Hong Kong and explaining his work flow. “I jump around from one project another. Sometimes it may be difficult to follow and looks messy.”

That being said, he assured that there was a method to the madness and if Chan’s new ‘Shapeshifter’ exhibition at Christie’s is anything to go by, which puts more than 80 of his creations up for public showcase, his way of working has certainly been productive.

Running Jan. 14 to 18, the exhibit’s scope is broad and incorporates sculptures, jewelry and brooches spanning the last 45 years of Chan’s work. It highlights his celebrated techniques including the Wallace Cut, a carving method he invented in 1987 by modifying dental drilling tools that results in an unusually 3-D feel, his mastery of titanium, a patented jadeite luminosity-enhancing technology, a reengineered porcelain that is five times stronger than steel.

“I think he completely changed the concept of jewelry, making jewelry really like an art,” Rebecca Wei, chairman at Christie’s Asia, said. “Before, jewelry was stone, a piece of jadeite or a sapphire. But the way he looks at jewelry is really from an artistic perspective.”

Asked if he would ever consider producing pieces for a more mass audience and with accessible pricing — for instance, Chan has ties to Chow Tai Fook for which he cut a 507.55 carat rough diamond — Chan says he has no plans currently but doesn’t rule it out.

“The most successful kind of brand is one that allows everyone to access it but in my interpretation, you can own things spiritually and physically,” he said. “Although only a limited number of people can own a physical object, the stories will still be able to be shared. These stories are something that anybody can own without actually having to buy it. I’m driven by the desire to create what interests me at the moment, not to meet the needs of the market but in the future who knows? I’d also want to see what I could innovate in that space before doing something.”

Chan, in a recent interview in Paris ahead of the Hong Kong show, pointed to experience carving gemstones as contributing to his capacity for innovating.

“Sometimes you carve and suddenly you find there is a crack and you have to quickly change your mind about what you are going to do — let’s say it’s the face of a goddess with a crack — you cannot continue, you have to be flexible and creative and find ways to work around the flaws, to follow the nature of the stone,” he explained through an interpreter.

Chan recounted burning through seven years and around the same amount of ovens in his quest for stronger porcelain, using ovens from China, Japan, Italy and the U.S. before settling on a German model, he said.

“It’s like cooking a piece of beef, if you give it a high temperature right away, then you have the outside totally darkened, totally grilled, but then inside it may be raw.” Advancing through trial and error as he experiments, Chan is also a keen observer, noticing rapid movements on the surface of gold as it heats up close to the melting point, for example. To form a stronger ceramic, he sought to align the various substances to make the material by finding a method to cook them in a uniform manner.

“Because of the difference in melting points, it gives the structure a gap, which becomes the breaking point — it makes it more fragile because the density is not the same, not totally aligned,” he said. In addition to a tight control over rising temperatures, Chan said he focused on adjusting the amounts of various materials carrying different melting points as well as studying how they shrank when cooked.

While Chan is aware of the historical and cultural values of porcelain, as well as its mark on his own memory, he also considers the materials he uses as a means of expression. He started looking at titanium as early as 2000 as part of a quest to make earrings with a lighter material than gold, and recalls being told at the Baselworld fair that if he used gold instead of titanium, people would snap up his designs immediately. To Chan, the distinction was like emphasizing paper over a work of writing written on it, and points out that the use of titanium broadened the possibilities of the material as a vehicle for expression.

“It’s not about wearing titanium or gemstones, but the fact that the gemstone comes from the generosity of nature, so the meaning is not the metal but about knowing it comes from the universe and symbolizes something, the relationship between human beings and materials, human connections and human conditions,” he said.