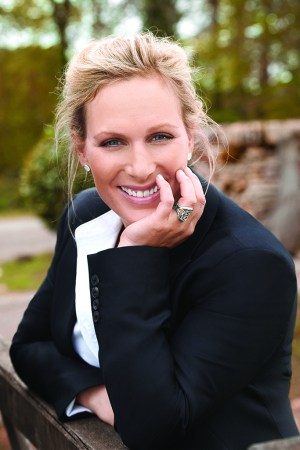 The line, called The Zara Phillips Collection by Calleija, takes its inspiration from Phillips’ sport, with designs that evoke a Saddle in platinum and gold set with white diamonds, and also gives a nod to Phillips’ royal heritage.

Calleija, speaking at the launch at Brown’s Hotel, noted that he and Phillips had worked in a “true partnership” on the collection. The duo had met as Calleija is a sponsor of Magic Millions, an Australian horse racing event that Phillips promotes. “This isn’t our brand taking Zara’s image and plonking it on some ads….Zara has been really, really involved all the way through,” he said of their collaboration, which has been two years in the making.

“Zara really knows what she likes and what she doesn’t like, and this was important for me because I need to connect my brand to the modern woman,” noted Calleija, who is known for his elaborate, ornate fine jewelry creations, which often spotlight Australian pink diamonds.

Instead, in designing with Phillips, the jeweler said he “had to practice the art of restraint.”

For her part, Phillips said she wanted the jewelry to be able to “carry an elegance all the way through the day.”

“I needed something that was going to be wearable all day long and into the night,” Phillips said. “We really wanted to go for rings and jewelry that were accessible but not too crazy, and still looked amazing.”

The collection will initially be sold at Calleija’s boutique in London, and his two stores in Australia — in Sydney and on the Gold Coast. Prices start at a 3,350 pounds, or around $5,260, for a Saddle necklace in white gold set with white diamonds, and rise to 26,800 pounds, or $42,070, for a rose gold Saddle ring set with blush pink diamonds.

More designs will be added to the collection, Calleija said, adding that his ideas for the line “just won’t stop.” The jeweler said he’s designed a custom cut gemstone in the shape of a saddle, which will be added to his collection with Phillips in the coming months.

“It will be a very modern, wearable design — this is just the start of our partnership together,” he said.