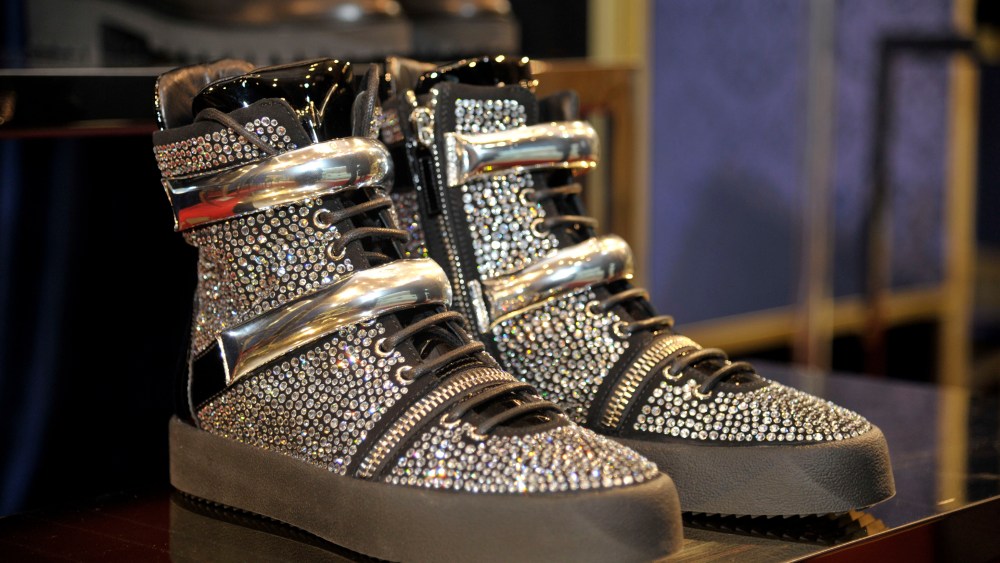 MILAN — Accessories brands showing in Milan did not shy away from presenting powerful designs in sync with the fashion trends on the runways. Think plaid or herringbone details, sports elements, and sophisticated embroideries and materials.

Here, a roundup of the presentations.

At Tod’s, men’s creative director Andrea Incontri updated the Chelsea boot with elastic bands in contrasting colors and a new sturdy, military-looking rubber sole. Saddlery stitching embellished lace-up ankle-boots with Prince of Wales or herringbone inserts – both patterns a strong trend in Milan this season. The British vibe also was reproduced on Tod’s staple pebble-soled gommino moccasins in the same fabrics. On the clothing side, the collection comprised parkas, aviator and ultralight down jackets in boxy shapes and with toggle fastenings in a range of ocean blue hues.

Versatility was the watchword for Giuseppe Zanotti’s fall men’s collection. He drew on elements from streetwear, sport, biker, combat and rock ’n’ roll. Key models featured biker-style midcalf boots where the top could be removed, turning them into a pair of ankle boots, while sneakers and classic loafers came with removable sock-style uppers. “I took the idea of the sock from the world of sport and 1960s tennis players,” he explained. “You can take them off and wash them in the washing machine.”

Jimmy Choo waltzed into fall with a collection featuring pheasant feathers, pearls and gold embroidery — and a dose of practicality. Pheasant feathers dangled as tassels on some loafers or blanketed the surface of other ones, while gold thread wound its way over velvet slippers in the form of gold vines and feathers. Pearl studs were dotted around the rims of soles while tufts of fur sprouted from inside some slip-ons. Creative director Sandra Choi said she wanted to balance “showmanship with reality,” which translated into chunky, translucent rubber soles on lizard-printed leather boots and mahogany or tortoise-shell finishes on high-tops and trainers.

For fall, Santoni celebrated its Italian heritage and the beauty of the everyday. The presentation was staged in historic Milanese bar El Tombon de San Marc and featured street-cast models sporting badges that proclaimed “Io Sono Bellissimo” [“I am very beautiful”]. The label’s classic staples — from desert and mountain boots to lace-ups and derbies — were reinterpreted in new proportions. “We used bigger volumes and lug soles for a feel that is more casual and informal,” said chief executive officer Giuseppe Santoni.

Church’s presented the new penny loafer “Pembrey Met,” updating the classic model with silver studs in different sizes, enhancing the essential lines of the shoe. While the storied “Pembrey” design came in soft calf, the new look is in brushed calfskin, with a thick sole. It will be available in four colors: black, sandalwood, navy blue and burgundy.

Furla‘s man is ready to speed away on his motorcycle. A sense of freedom infused the lineup, which centered around the messenger bag. Metal details were references to mechanical parts and bolts and elements of the biker jacket were translated into a tote. The Italian brand revisited the animal world with geometric patterns depicting the leopard, for example, while a nylon bag was embellished with an embroidered dragon. Furla has a message — “Stay Reckless,” the motto that ran across a black backpack.