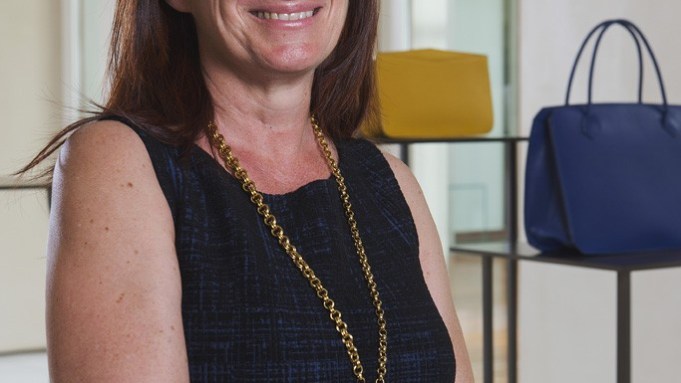 The first step in the strategy is the opening on Nov. 15 of a 1,620-square-foot flagship on Madison Avenue in New York, which will introduce a new store concept. “After Milan’s Via Manzoni flagship, this unit has an enormous strategic importance,” said Bettari during an exclusive interview at the brand’s headquarters here in the palazzo that also houses its store. “Thanks to Barneys, we are positioned at the top level in the U.S.”

The New York store’s concept was conceived by architect Marco Costanzi. Gray stone and brass are among the materials that will be juxtaposed in the store. The windows and the interiors will be embellished with a grid reminiscent of those seen in the courtyards of antique Milanese palazzi. “I have always loved how the gardens are hidden in Milan and not on the street,” said Bettari.

Valextra is leveraging Bettari’s expertise in the luxury industry to build its business. The executive was previously worldwide commercial director at Joseph. Prior to that, she was president and ceo of Fendi Japan, where she repositioned the brand in the region. Before that, as president and ceo, she headed the start-up of Furla Japan, where she developed the brand’s retail network with the opening of almost 50 stores.

Bettari succeeds Marco Franchini, a former chairman and ceo at Bally, who left Valextra in May. Franchini was tapped in March 2013 when London-based investment firm NEO Capital acquired a 60 percent stake in the luxury company through a capital increase.

Emanuele Carminati Molina’s Carfin 92 owns the remaining 40 percent and he remains chairman of the luxury brand.

Carminati Molina spoke in mid-2013 about seeking an initial public offering for Valextra. Bettari said, though, that an IPO is not an immediate focus.

Bettari’s experience in Asia will help develop Valextra in the region. The executive said the company “is already strong in Japan,” but is investing in building its women’s division. A unit opened at Isetan two weeks ago. “There is affinity for Valextra in Japan and Asia, where there is a strong sensibility for understatement, discretion and essential details,” Bettari noted. In November, the company will open a store at the International Finance Centre luxury mall in Hong Kong. While Valextra’s performance in Japan and Korea is “strong,” the brand has yet to build a presence in China.

Bettari pointed to two other growth areas: e-commerce and bespoke pieces. Valextra’s online store will launch in Europe and the U.S. in October and in Japan and the rest of the world at the end of the year.

“We want to strengthen our bespoke offer and will have a dedicated area on the second floor in our New York flagship,” said Bettari, highlighting that the personalization can be applied to any product — all strictly no-logo — with gold or silver leaves and is always free of charge.

Bettari also underscored Valextra’s tradition of working with outside creative talent, since Giovanni Fontana founded the brand in 1937. Marking the opening of the New York and Hong Kong stores, Valextra tapped Italian designer Martino Gamper to create exclusive products for the label. Valextra is designed by design director Álvaro González.

The executive declined to provide financial details for the company.