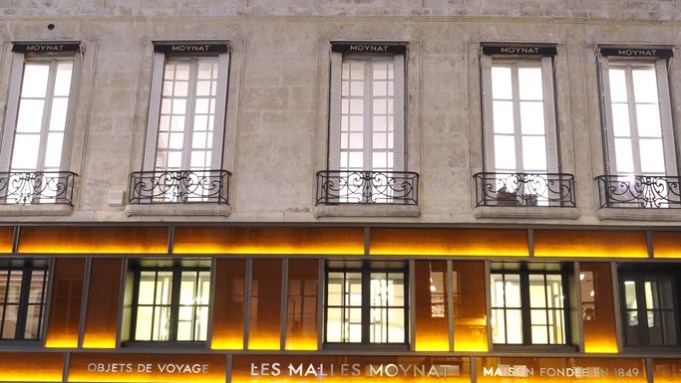 PARIS — Luxury titan Bernard Arnault, who has a knack for revitalizing heritage brands, is putting the spotlight on an almost forgotten 19th-century trunk maker.

On Saturday, the doors are slated to open on a 2,150-square-foot boutique here for Moynat Malletier, reviving a French name that has been dormant for decades, and transferring the curvaceous forms and innovative hardware of yore to luxurious leather goods for today.

Vintage trunks, many shaped to hug the curves of early automobiles, are displayed next to sleek handbags created by Ramesh Nair, a designer whose resume includes stints at Hermès, Christian Lacroix and Yohji Yamamoto.

With a two-story columnar glass display case as it centerpiece, the store at 348 Rue Saint-Honoré invites discovery.

“The first goal is not sales. The first goal is to tell the story,” said Guillaume Davin, a former Louis Vuitton and Dior Parfums executive who was brought in to spearhead the business venture. He declined to give first-year sales projections.

As reported first in WWD, Groupe Arnault purchased the rights to Moynat last year and has been quietly gearing up for the store opening as its first statement to the market.

Davin said there is no immediate plan to open more units, or to wholesale the leather goods range. Indeed, with only six people working in Moynat’s leather goods atelier in Burgundy, inventory will be limited.

Nair has concocted a range of bags in a classic vein, but with a minimalist edge, putting the focus on handles and closures that were Moynat obsessions. Retail prices for bags are 2,500 euros to 5,000 euros, or about $3,340 to $6,680 at current exchange. Totes in a coated canvas come just under 1,000 euros, or $1,335, while those in exotic skins can run into the five figures.

The boutique will also offer several custom services on the mezzanine level. Customers can have their antique Moynat trunks recovered in the new-look logo canvas, which has a powdery finish and a metallic sheen. Or they can commission made-to-order trunks, the nails spaced 7 millimeters apart as they have always been.

Nair showed off one of the brand’s first custom projects: a sloping carrier for a magnum of Krug, the Champagne maker that is part of Arnault’s constellation of luxury labels under LVMH Moët Hennessy Louis Vuitton.

During an exclusive preview of the store and products, Davin shared some of the rich brand lore of Moynat, founded in 1849.

It was one of the rare malletiers to be co-founded by a woman, Pauline Moynat, a merchant who teamed up with the Coulembier family of artisans, and who was one of the first to set up a boutique at the foot of Avenue de l’Opera, the Champs-Elysées of its time.

Peering out the window down the Rue Saint-Honoré, Davin pointed out the remnants of a sign from a long-ago occupant at No. 229 — “Articles de voyages,” it reads. At one point, there were some 200 trunk-related storefronts on a strip running from the Rue Castiglione, which runs into Place Vendôme, and the Moynat shop up the road, he said.

Davin tapped Gwenael Nicolas, a French architect based in Tokyo, to design the boutique, with a modernist glass front in the reddish brown color of leather Moynat used to trim steamer trunks.

Few malletiers made the transition to modern times, save for Louis Vuitton, revived by Arnault, who installed Marc Jacobs as artistic director and built it into a global luxury powerhouse.

Moynat’s neighbor Goyard, a landmark trunk maker on the street since 1853, has pursued a rejuvenation drive on a smaller scale led by entrepreneur Jean-Michel Signoles, who bought the sleepy family-owned firm in 1998 and made its logo totes a fashion item.

Davin characterized Moynat’s rich design lore as a deep well of inspiration, showing off patent documents for its T-shaped trunk closures, canvas coated in sap from Indonesia, and a variety of locking mechanisms.

Moynat also innovated by collaborating with artists, tapping painter, illustrator and decorator Henri Rapin to conceive its visual identity, including its M-initialed canvas.

Nair transported the shape of a round-topped wicker trunk, and a tapered carrier for boots, to create women’s handbags. He opened some to show off the leather lining, and the specialized hardware that prevents bag handles from bumping against the side of purses.

Moynat first produced bags for small objects in 1879. Davin allowed that the name is known mainly among elderly people, and serious trunk and automobile collectors, meaning he is tasked with “rebuilding the patrimony.” That included buying vintage trunks at auction, and assembling documentation, from catalogues to patent applications. Moynat published a book, which comes in a box with a rounded bottom — echoing its most iconic shape — that fits comfortably on the lap. It will be carried at select booksellers in Paris.