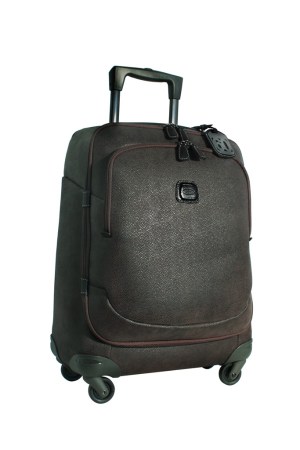 Italian leather goods company Bric’s will mark its 60th anniversary this year with a limited-edition collection, called Life 60°. It hit the market this month.

This story first appeared in the July 30, 2012 issue of WWD. Subscribe Today.

A tribute to Bric’s signature Life range, the anniversary edition comprises travel pieces and bags in the house’s olive suede-like technical fabric combined with black leather details, and a customized bronzed metallic label. The average retail price is about $500.

Bric’s luggage has appeared on the big and small screens, including in “Twilight,” “Sex and the City,” “The Tourist” and “Mamma Mia!” — an indicator of the brand’s recognition in the U.S.

Established in 1952 by Mario Briccola, the Como-based company, which built a reputation in the industry manufacturing luggage and bags for luxury Italian brands including Gucci, Giorgio Armani and Salvatore Ferragamo, began developing its in-house brand in the Eighties, and eventually focused on its own Bric’s brand only.

“Sales outside Italy account for 75 percent of our sales,” said Pietro Briccola, Mario’s son and president of Bric’s USA. He pointed out that 18 percent of exports derive from the U.S., making it “the most important market for the brand.”

Bric’s counts two stores in the U.S. — one in New York, on Madison Avenue, and another in Los Angeles’ Century City. The company’s products are also available in top American department stores, including Bloomingdale’s, Macy’s, Barneys New York and online at the Neiman Marcus e-store.

“Our success in the States is linked with the flair of being an Italian brand, providing elegant travel pieces at affordable prices,” said Briccola, who added that the company is working to “increase revenues and affirm the brand’s positioning in the accessible luxury segment.”