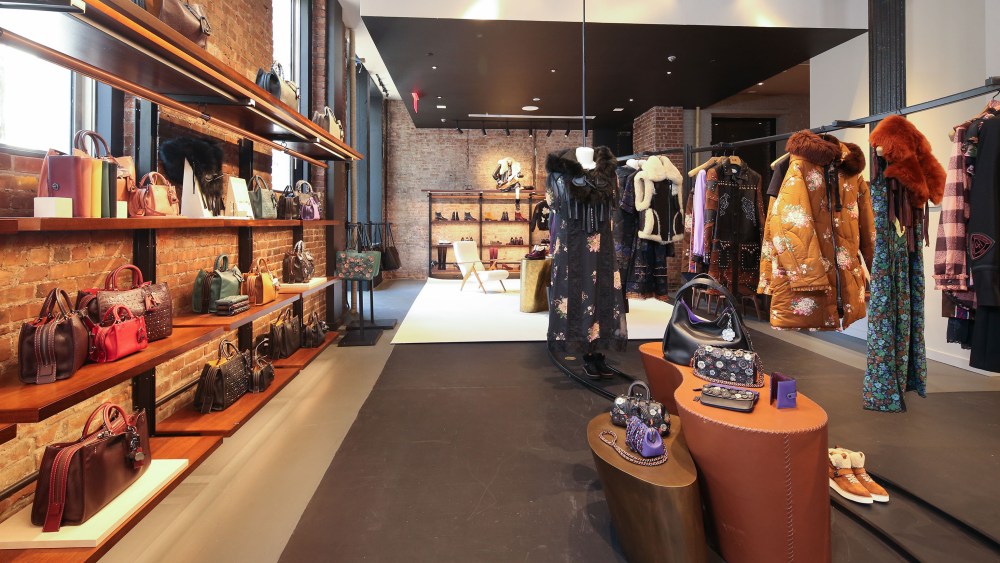 NEW YORK — Stuart Vevers may have been born and raised in the U.K., but New York City is his home now. And so redesigning the company’s boutique in SoHo was especially meaningful to the executive creative director of Coach.

“It’s my local store,” he said. “It’s the closest to where I live in TriBeCa, so I visit it frequently.”

The 3,790-square-foot store at 143 Prince Street is in a building that dates to the Thirties and seeks to blend historical architectural features with Coach’s signature details. The windows facing West Broadway have been opened up to reveal more natural light, there is a mix of bespoke furniture and custom cabinetry and the building’s original cast-iron columns, exposed brick walls and end grain block flooring were also retained.

Vevers worked with William Sofield, designer and president of Studio Sofield, on the project, which also speaks to the uniqueness of the area.

“We focused on connecting the space to the neighborhood so that it felt unique and considered for this space and building,” he said. “It’s also an expansion, so we had more space to play with.”

The store previously measured 3,090 square feet and was closed for the renovation since the beginning of June.

The two-level unit sells men’s and women’s ready-to-wear and accessories as well as seasonal limited-edition pieces. Services include Made to Order Rogue, which allows shoppers to customize a Rogue bag, and monogramming is also available.

Vevers said he also worked on the design of the company’s 20,000-square-foot flagship on Fifth Avenue, which opened last year, but the SoHo unit has a different aesthetic. “We want people to discover different locations and feelings,” he said. “The assortment and curation is different. Fifth Avenue is more elevated, but we wanted this to feel like a cool, downtown space.”

Vevers enjoys stepping outside of the apparel and accessories realm and working on store design for a change. “I definitely enjoy it, but only if I’m working with the right partner,” he said. “With Bill as a partner, we started talking about the space and came up with some new ideas.”

The store reopens to the public today. Coach operates more than 900 stores around the world. Vevers will show his spring collection on Tuesday, where he said he is planning “some fun surprises.”