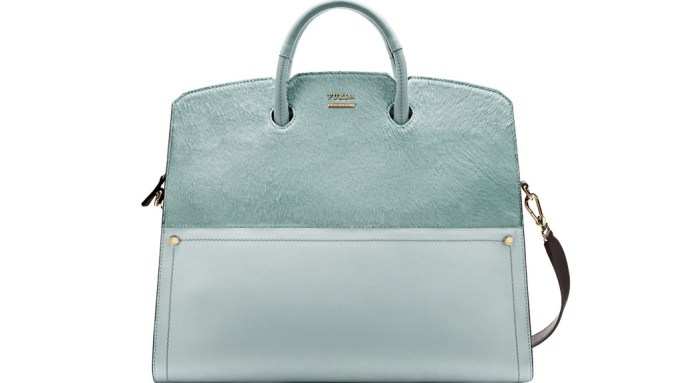 MILAN — Furla has aggressive plans to expand in an increasingly crowded accessories market and to develop as a lifestyle brand, eyeing growth prospects in Asia.

“We are organizing ourselves for the big leap, we are at a turning point and we are ready to face the challenge,” said chief executive officer Eraldo Poletto.

Furla, which is showing its spring collection on Friday, can leverage “an extraordinary asset, the history, Italian heritage, and made-in-Italy creativity which is necessary but not enough; we must be more aggressive in our methods and in our determination,” said the executive, who returned to the Bologna-based brand in May after a brief stint in the same role at Alfred Dunhill.

Poletto was upbeat, as he believes Furla can win in the premium segment, also given the strong middle class that is emerging in Asia. “This is our moment,” he said. Asia accounts for 13 percent of sales, excluding Japan, which represents 27 percent. In the first half of 2013, the Asia-Pacific region showed 32 percent growth and Japan was up 31 percent.

Earlier this year, Furla established a joint venture with the Fung Group to open 100 stores in Greater China in four years. There are now 20 units in that market.

Furla has consistently invested in its retail chain, which now comprises 328 stores, of which 153 are directly operated, and the brand is available at 1,290 points of sale globally.

A boutique on London’s Regent Street will open in 10 days and Poletto revealed the company has plans to open a store in spring on New York’s Fifth Avenue, which will replace the unit on Madison Avenue. “We are thinking of other stores in New York; there is potential downtown,” he said. The U.S. accounts for 9 percent of sales and grew 31 percent in the first half this year.

Italy, which accounts for 24 percent of sales, grew 10 percent in the first half.

Poletto firmly denied any immediate plans to go public, despite his view on “thinking as a big company,” or any investor interest. “We must become bigger, small is no longer good and you need an important critical mass, but this is a healthy company that has no debt and is self-funded,” he said.

To build the lifestyle component, Poletto said the company is looking into other categories, especially shoes.