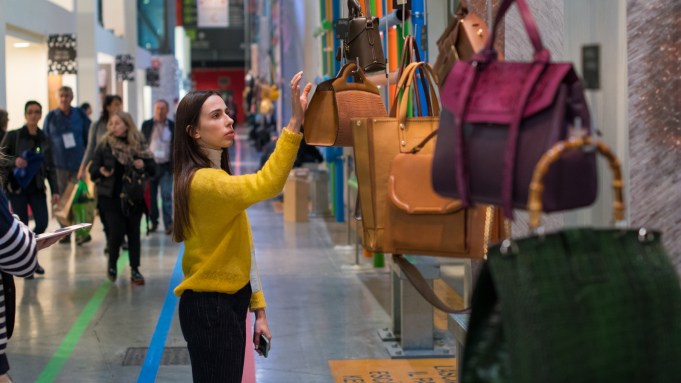 The trade show, held Feb. 11 to 14 at the Milano-Rho fairgrounds, wrapped with a 5.6 percent increase in the number of visitors, totaling 11,000 people mainly represented by international buyers. As Roberto Briccola, vice president of Aimpes, Italy’s leather manufacturers’ association, pointed out that Mipel prioritizes “qualified visitors, such as the big [retail] companies’ buyers,” he said.

While the domestic presence slightly increased, registering a 5 percent uptick, the growing trend was backed up by foreign visitors: Russian buyers topped the list, up 26.1 percent compared to the September edition, followed by Japan, South Korea and China. The presence of Europeans was dented by Brexit and showed a slowdown in the number of visitors from the U.K. as well as from France, while Germany and Austria proved to be new significant markets.

According to Mipel’s new chief executive officer, Danny D’Alessandro, “international buyers are focused on leather goods when it comes to Made in Italy products and the successful companies were those able to go beyond the domestic stagnation, [investing] in exports,” highlighting how leather accessories accounted for 80.4 percent of exports with a 6.4 percent increase in the average euro price per kilo.

In particular, D’Alessandro underscored that the leather goods industry was able to stay strong even during the 2012 to 2017 period of crisis, and it was not affected by the stronger euro. The added value of Made in Italy products helped the industry close 2017 with net exports up 18.3 percent, totaling 3.8 billion euros.

The fair listed 300 exhibitors, between established and emerging brands, which presented their fall collections.

Milan-based Leu Locati is a fifth-generation, family-run business with an atelier in the center of the city, and was the focus last year of a documentary run by Google’s Arts & Culture platform. The company delivers seasonal collections reworking its successful styles with different twists each time.

Paolo Amato, the company’s ceo, explained how “the brand’s know-how and old abandoned techniques are reinvented to satisfy the customers’ needs with personalization services.” For example, a mesh, envelope-style bag in velour and golden thread was an example of handicraft; this was realized with an 18th-century loom. “Today’s consumers are fascinated by fashion-wise products and low price points, but we are betting also on made to measure, where clients decide price and style,” he said.

The same direction seemed to be high on Bric’s agenda. In keeping with the firm’s heritage of high-performance, luxury materials and attention to detail, Bric’s is trying to improve its offering, introducing a new range of leather and fabric backpacks equipped with a USB-recharger to meet “the traveling and working lifestyles of our clients,” explained Briccola, who is also ceo of Bric’s.

The travel bags and accessories firm recently backed up its operations with a 700,000 euro cash injection financed by BNL BNP Paribas and guaranteed by Sace, the Rome-based export credit company, to further develop in the U.S. and Asian markets. While the stronger euro has affected the brand’s exports, “the U.S. still remains our most significant market, accounting for 35 percent of our revenues,” explained Briccola.

The U.S. and Asia are target markets for Braccialini, as well. The Florence-based company is trying to focus on its new course following its acquisition by Tuscan Graziella Holding in 2017. Lorenzo Braccialini, who unlike his brothers is the only one still at the company as its chief marketing officer, said the company “is targeting the U.S., a market which we want to spoil and which requires to be approached with a strategic plan.” Braccialini is already present in the U.S. and Canada, at Lord & Taylor and Hudson Bay department stores, respectively.

Braccialini was upbeat, saying the company registered a 20 percent uptick in the spring 2018 sales campaign compared to the previous season and he hopes for a good fall season. The brand aims to increase its global exports to reach 60 percent of total sales in 2018.

In order to attract a younger customer base, the design team has developed the fall 2018 collection around the theme of “Mountain Chic” within two different lineups. Jacquards in the shape of an owl and handcrafted calf applications on leather totes enhanced the mountain scenery theme for the Braccialini main line, with the “Penelope” style also enriched by metallic details. The brands also developed a more accessible lineup under the moniker “Braccialini Tua,” delivering a range of eye-catching tote bags in faux leather splashed with postcard-like patches.

Younger customers take center stage in Cromia’s new strategy as well. In 2017 the Tolentino, Marche-based handbags and accessories brand, which also serves as a third-party manufacturer, had revenues of 35 million euros, up 12 percent compared to 2016.

Cromia is investing in its own brand and developed a collection for fall keeping young, medium-spending customers in mind. Pop-art and graffiti were the main inspirations triggered by the artworks of Keith Haring and Jean Michel Basquiat, which were worked on a cute tambourine-shaped little bag, for example. Fur details and hardware embellishments improved the urban and easygoing vibe. The brand will debut a special capsule collection with designer Amedeo Piccione, during the upcoming Milan Fashion Week.

Mipel served as the platform for Berlin-based brand Strenesse to unveil part of its repositioning plan under the guidance of newly appointed ceo Jurgen Gessler. “We are looking to the future but also our history. Our strong focus is on high-end materials and Made in Italy products, as well as very competitive pricing,” said the executive about his strategy.

At Mipel, Strenesse introduced the “Helene” style leather tote presented with an installation in the Glammy Boulevard area. “Accessories are a new start, they were never really in the focus of the brand,” said Gessler, adding that showing in Italy, where production takes place, was a good fit.

In keeping with the format debuted in 2016, Mipel showcased a range of emerging brands. In particular The Glamourous project, supported by the Italian chamber of buyers, promoted four brands, each one presented by an Italy-based retailer.

Micoli first introduced her handbags firm for fall 2016 in partnership with LuisaViaRoma and has developed her brand since then. “I knew Gigi Tropea thanks to Farfetch and showing at Mipel gained me huge press coverage and buyers’ interest,” the designer said.

Entirely Made in Italy, Micoli worked closely with Tuscan- and Umbria-based artisans and presented a collection of envelope-shaped, leather crossbody bags in leather, patent leather or accented by silk satin details. “This is a collection that you understand by wearing it; I was thinking about what women really need, about taking on a slow-fashion approach,” she explained. In fact the lightweight bags, albeit small, feature billfold style units inspired by Micoli’s passion for origami, the Japanese art of paper-folding, with room enough for credit cards, a cellphone and a lipstick.

The brand is carried at retailers including Opening Ceremony in New York and Los Angeles, Unlike in Nagoya, Japan and is set to debut at The Leisure Center shopping destination in Vancouver with the spring 2018 collection.

The other Mipel project, named Scenario, gathered young international designers, four of whom were selected by the Italian fashion chamber with the support of four international buyers. These included Silvia Massacesi, presented by Paris-based Concento; The Dots, by Korean Hyundai Department Store; Eden Diodati by Japanese store Parigot, and Woobag by online retailer Wizwid.

“Trade shows cannot be meant for big luxury brands, we are the biggest trade show in the leather goods industry, we have to invest to grow and invest in young talents,” said Riccardo Braccialini, president of Mipel and Aimpes, emphasizing the importance of such projects and the benefits for new brands of showing at Mipel.

Braccialini also praised the support of institutions such as ICE, the country’s trade agency, while D’Alessandro noted, “Politicians have started to understand the importance of the fashion industry and being supportive.”

Mipel was also celebrated with a series of site-specific installations and cocktail events held at the Rinascente department store, in collaboration with Italian magazine Rolling Stone throughout the four-day event.

The next edition of Mipel TheBagShow will run Sept. 16 to 19.