Hermès Puts the Spotlight on Leather

The brand has unveiled its "Leather Forever" exhibition at Mayfair gallery 6 Burlington Gardens. 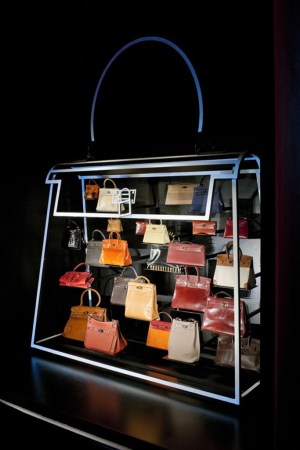 LONDON — Hermès has unveiled its “Leather Forever” exhibition at Mayfair gallery 6 Burlington Gardens, a show designed to explore the house’s “very special relationship with leather,” according to Thierry Outin, managing director for Hermes U.K. The exhibition is an expanded version of a similar exhibition that the house has shown in Shanghai and Rome.

The show makes a feature of Hermès’ craftsmanship and artistry. In one room, two artisans from Hermès’ workshops in Paris are installed at work benches, crafting Hermès handbags as visitors watch, while in another vast leather skins in a rainbow of colors are on display. The house’s famed handbags also take center stage — one room shows off different versions of Hermès and Kelly bags displayed in a giant Perspex Birkin, while in another there are vintage examples of Hermès’ creations, such as a Constance bag from 1973, an Arceau handbag from 1954 and an Elan Verrou clutch from 2009.

“We’re celebrating our 175th anniversary this year, and I think [many] people don’t know that we started as a saddle maker,” said Outin. “This technique and this craftsmanship…is something that was developed in the early days [and] that we have kept and nurtured to make the quality of the bag that we propose today.”

Outin said he hopes the exhibition will reach “the general public.”

“The idea is really to treat the relationship we have with leather in a very light-hearted way,” said Outin.

To wit, there are also plenty of whimsical pieces on show — they include a winged saddle in red and orange calfskin and yellow lambskin created by Hermès in 2005, a Kelly bag fashioned into a rocking horse and a black calfskin wheelbarrow commissioned by the Duke of Windsor as a present for Wallis Simpson in 1949.

“It’s very important that beyond the usual perception of Hermès we can share our culture, our values, really who we are with the general audience in England,” said Outin of the house’s decision to stage the exhibition. He also noted that 2012 is “the year of London.” “With the Queen’s Jubilee…and the Olympic Games, we thought it would be the perfect timing to own our own little event,” he said.

The exhibition runs through to May 27. During the time the show is on, Hermès will auction four one-off versions of its Passe-Guide handbags, designed to celebrate England, Ireland, Scotland and Wales. The online auction will begin on Christie’s Web site May 14 and will run to May 31. The proceeds from the auction will be donated to London’s Royal Academy of Arts and the four bags are on display as part of the exhibition.