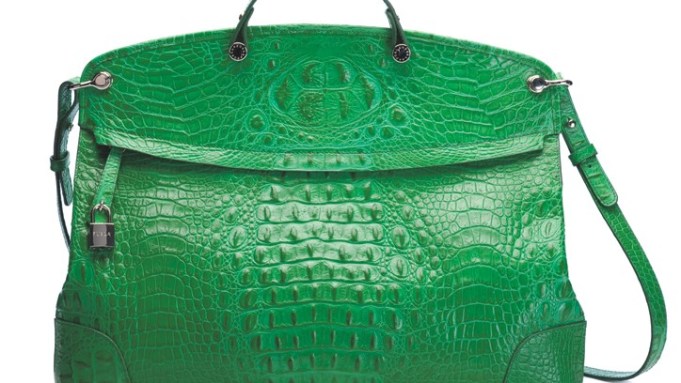 MILAN — The Italian leather goods industry is showing signs of recovery after two years of challenges and lackluster performance.

Production and exports grew in the first half of the year, stimulated by the consumers’ improved mood and fresh desire to shop and the retailers’ need to restock. Italy’s gross domestic product is expected to grow 1.3 percent in 2010, tourism is brisk again and companies are turning to new markets to balance softer business in more consolidated and saturated regions. According to Aimpes, the country’s industry association, sales of Italy’s leather goods totaled 809 million euros, or $1.07 billion, in the first six months of the year, up 9.3 percent compared to the same period in 2009. Dollar figures are converted at average exchange rates for the periods to which they refer.

Aimpes said international demand is focused on either medium-low products in synthetic materials sourced outside the country, or high-end, made-in-Italy goods by well-known brands. In the first six months of the year, exports rose 15 percent to 1.52 billion euros, or $2.02 billion, compared to a 20.4 percent drop in exports in the same period last year. The association attributed the growth in exports mainly to improved sales of luxury leather goods by high-end fashion brands.

“The last 24 months were tough for everybody in the industry, and the leather goods sector did not represent an exception,” said Patrizio Di Marco, chief executive officer of Gucci. “In the first part of the year, we saw a more comfortable trend, thanks to a general recovery of the macroeconomic backdrop, which is reflecting — as far as Gucci is concerned — a more confident approach toward sophisticated and luxury leather goods, products characterized by an impeccable workmanship of the leather that represents a testament to our commitment to authenticity, made in Italy and the highest level of quality.”

Leather goods at Gucci account for more than 50 percent of the company’s business, totaling above 1 billion euros, or $1.39 billion at current exchange rates. Di Marco noted that two of Gucci’s best-selling handbags are the New Bamboo, which comprises 140 separate, hand-assembled pieces and requires 13 hours of work, and the New Jackie bag, with a rare type of stitching.

Michele Norsa, ceo of Salvatore Ferragamo SpA, said the company prides itself on Italian production, which the executive believes continues to be pivotal for Asian customers, who are well-informed and inquisitive. He remarked on the growth rate of the Chinese market, which is “close to becoming our number one.” Norsa described the industry as “more dynamic than others,” adding that “business has picked up faster and more solidly than expected.” He also noted that a weaker European currency has helped boost tourism and traffic in stores.

Tod’s SpA showed an acceleration in its second quarter, with revenues gaining 7.4 percent compared with the same period last year, mainly boosted by gains in its core footwear business and in all markets globally. Commenting on these results, chairman and ceo Diego Della Valle said the first six months of the year “delivered excellent results, in line with our expectations — acceleration of the sales growth, with a strong predominance of full-price sales versus promotional ones, [and] significant increase of the operating profitability.”

Della Valle projected even stronger results in the second half.

Mauro Muzzolon, director of Mipel, the international leather goods trade show held twice a year in Milan, said, “The sector is showing that it can react, that it’s alive.” He said the industry has been hard hit since the end of 2007.

“My fear was that the crisis would continue into 2010, but there’s been a point break and business has picked up,” Muzzolon said. “There is more optimism, stores have no more stock, the exchange rate is favorable and Russia is slowly coming out of the crisis.”

According to Aimpes, Italian exports to Russia in the first six months grew 13.7 percent. Japan is also showing some signs of recovery, with a 3 percent gain in exports.

Muzzolon said that he’s noticed a “spasmodic attention” to the quality-price ratio, as Italy’s cost of labor is higher than that of Asia or Eastern Europe, for example.

“Innovation is key for us,” he added.

Giovanna Furlanetto, owner and chairman of Furla, said, “When times are tough, it’s important to raise the level of creativity and innovation,” and that her accessories company has been “working extensively on product,” looking for new materials and shapes. She cited the Candy, an innovative PVC tote made of three pieces stitched together by artisans that retails at 145 euros, or $202. For spring, Furla has already sold 22,000 Candy pieces.

The company opened its most important store so far, located in Rome’s central Via Condotti, in a historical building and covering 5,400 square feet. Tapping Eraldo Poletto from Retail Brand Alliance Inc. in June, Furlanetto hopes to “increase traffic in our existing stores” and “to reach a younger target,” also through the help of Furla’s Talent Hub project that supports young designers.

Gianni Dori, one of the owners of footwear and handbags firm Rodo, said “If you don’t invest, you don’t go anywhere.” Accordingly, Dori is looking to open his first monobrand store in Milan next spring, in the city’s so-called “golden shopping triangle,” in the Via Montenapoleone area. Dori said he’s seen a 15 percent growth with the spring 2011 collection. He also noted the rebound of Russia and the strength of Asia, while saying that the U.S. and the U.K. are “still suffering.”

Furlanetto added that “there is a strong energy in Russia, where women want everything.”

Furla is opening its 12th store in the country, in Moscow’s Gum department store.