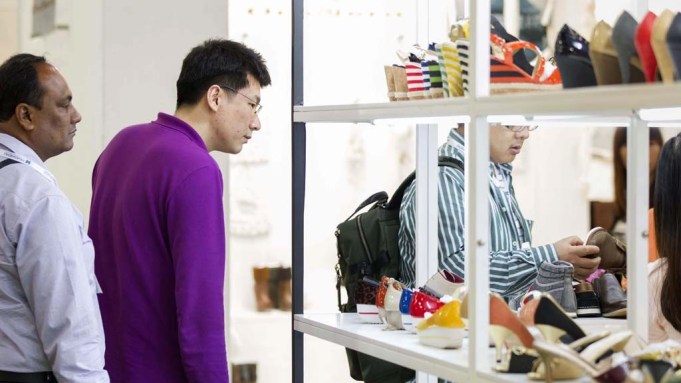 HONG KONG — Asian leather goods manufacturers, particularly from China, are upgrading to higher end goods, driven by escalating labor prices and a desire to move away from unskilled labor.

At the recent Fashion Access fair, one of the world’s largest leather exhibitions, there were more than 400 exhibitors with finished goods, an increase of 35 percent over a year ago, with about 25 percent exhibiting for the first time. Fair organizers said they’ve seen Chinese and Hong Kong accessories makers going upmarket, as evidenced by the Fashion Avenue section featuring exhibitors launching new brands growing 25 percent compared with last March’s edition.

Overall, there were about 1,800 exhibitors from 50 countries at the fair, which consisted of two parts, finished goods and materials. The fair, including bags, accessories, apparel, shoes and materials, ran from March 28 to 30 at the Hong Kong Convention & Exhibition Center.

Manufacturers in Asia have been facing dual pressures as orders to Western clients shrink and labor prices, notably in China, have been rising. To fight against shrinking margins, manufacturers have been moving to higher end goods, finished products and eyeing Asian consumers.

Among the exhibitors at Fashion Avenue was Wasabi, a Guangzhou-based shoe designer and manufacturer. After making shoes for others for many years, “it’s time for us to start our own brand,” said Kenneth Chang, a manager at Wasabi. The company, which makes shoes for U.S. companies such as Guess, plans to sell online to Chinese consumers, he said.

Wasabi, like other manufacturers, has been turning its attention to the domestic market as sales overseas have been slowed by an uncertain economic outlook. Chang said orders from European customers are down about 30 percent, though business to the U.S. has stayed steady. Sales to China are currently a fraction of overall sales, but Chang sees that changing.

Meanwhile, the company struggles with labor prices up 25 percent from a year ago and material prices up 15 percent. Despite the rising labor prices, Chang said the company has no intention of moving production inland, where labor is cheaper, or overseas because of quality concerns.

Indonesian bag designer and manufacturer Lunar Cipta Kreasi, which launched its own bags brand, Lunar, in 2006, made of locally sourced rattan and leather, has been selling its own branded bags to customers in Japan and producing bags for retailers in Europe. Bambang Prijono, a manager at Lunar, said, while orders to European customers have dropped off a bit, business has been “good and steady” with Japan.

Another exhibitor eyeing Asian consumers was Airspeed, a California-based shoe designer that was bought by a Taiwanese company last year. The company, which sells its shoes in Wal-Mart, is looking to expand in Asia, Europe and South America, said Anna Jiang.

While higher labor prices have been on many buyers’ minds, Sandra Leon Colonia, president of Gold Lion Peru, said she found prices “OK.” The company exports cotton and alpaca around the world and imports fashion accessories and footwear, mostly from China. Colonia said the designs from China best suit her clients’ tastes in Peru and that her clients are willing to pay for better quality. Her main complaint was production time, which she wishes was closer to a month instead of the typical 45 to 60 days.

Another buyer, Takeshi Semba of Futaba, a Japanese women’s accessories retailer, said he’s been considering Chinese-designed and manufactured goods because the prices are lower. Futaba has traditionally imported U.S. and European brands and distributes through its own stores in Japan as well as through wholesale distributors around Asia. Semba said that he believes that while Chinese designed and manufactured goods would do well in Japan, where consumers care more about the design and quality of a product than the brand, he’s not so sure this is the case elsewhere in Asia. His biggest challenge at the fair, he said, was that the minimum order — around 2,000 pieces per style or color — was far larger than what he was looking for.

Exhibitors showed a lot of bright colors. APLF’s color and material trends guide for spring-summer 2013 highlighted a range of paler tones such as gray, white or champagne featuring delicate finishes; jungle colors such as green and brown in more natural finishes; pinks, lilacs and blues, as well as a range of more bright, intense colors.