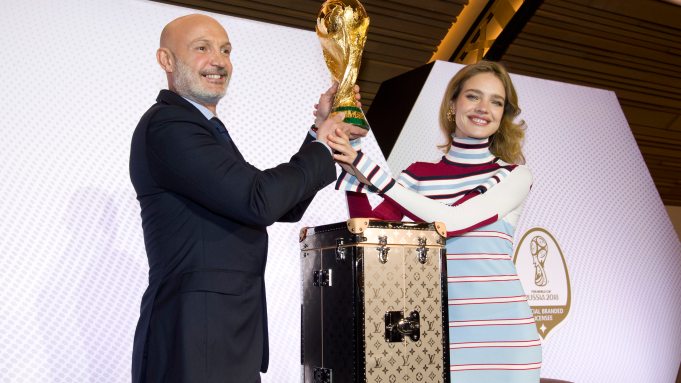 ASNIERES-SUR-SEINE, France — As Russia gears up for the kick-off of the World Cup next month, Louis Vuitton is deepening its partnership with FIFA, soccer’s international governing body, with the launch of a licensed collection of upscale leather goods in the flag colors of the participating nations.

The collaboration is one of three special projects unveiled on Thursday at the historic Louis Vuitton grounds near Paris in the presence of Michael Burke, chairman and chief executive officer of Louis Vuitton; FIFA chief commercial officer Philippe Le Floc’h; Russian model and philanthropist Natalia Vodianova, and retired soccer player Frank Leboeuf, part of the winning French team in 1998.

Vodianova and Leboeuf presented the trophy that will be handed to the winners of the tournament in a new titanium-covered case designed and handmade at the luxury brand’s neighboring special orders workshop, which is headed by Patrick-Louis Vuitton, the great-great-grandson of founder Louis Vuitton.

“One definitely wants to touch it, it’s so magnetic as an object,” said the model. “Yeah, but you cannot,” Leboeuf firmly retorted, going on to explain that per tradition, only winners of the tournament and heads of state are allowed to handle the World Cup trophy.

Burke said developing the case was an arduous process, as titanium is tough, so far making only a brief appearance in Louis Vuitton’s fall men’s runway show. “It took us more than two years to make, so this is the first time we are showing you an object of this type, and it may inspire others in the not-too-distant future,” he teased.

In the meantime, the brand will launch a soccer-themed collection of bags, wallets, a pocket organizer, a coin purse and luggage tags, which will be available in 50 Louis Vuitton stores around the world and online for the duration of the event, scheduled to run from June 14 to July 15.

The line’s hexagon-shaped design is inspired by the black-and-white Telstar football launched by Adidas in 1968. Named after a communications satellite, it was specially designed to show up on television screens and made its World Cup debut in Mexico in 1970.

“At Vuitton, we think this 1970 football represents perhaps a leading example of 20th-century design, so we wanted to honor it,” said Burke.

Made from the brand’s signature Epi leather, the bags — including its best-selling Keepall and Apollo styles — will be proposed in three color combinations, though V.I.P. customers can also custom-order the Keepall in the colors of almost any national flag, with more than 250 possible color combinations.

Luggage tags will feature one of 36 national flags, representing the 32 nations participating in the tournament, as well as four that did not qualify: Italy, the Netherlands, the United States and China.

Best known as the longtime partner of the America’s Cup yacht race, Vuitton’s decision to deepen its ties with FIFA under the terms of its new agreement, which runs at least until 2022, comes at a sensitive time for the organization.

It has struggled to find sponsors and partners for this year’s event in Russia, after the U.S. government in 2015 indicted several FIFA officials and sports marketing companies for bribery and money laundering, leading to the suspension of its then-president Sepp Blatter.

Le Floc’h joined in 2016 as head of the marketing and television divisions, a post created as part of a wider restructuring in the wake of the corruption scandals. He said that although his team has only had 18 months to work on the Russian event, commercial revenues are ahead of FIFA’s initial target of $5.6 billion.

Of this, roughly 60 percent comes from media rights and 40 percent from partnership deals with companies such as sticker maker Panini and video game company Electronic Arts. The event’s official timekeeper is Hublot, which like Vuitton belongs to French luxury conglomerate LVMH Moët Hennessy Louis Vuitton.

While neither side would disclose the amount of Vuitton’s sponsorship, both insisted the partnership made sense.

“We wanted to change the way we worked a little bit, so one of the things we were very much interested in was bringing football into the world of luxury, and Louis Vuitton seemed to us a very useful bridge to help us navigate this world,” said Le Floc’h.

“Liking football and liking luxury goods are not necessarily incompatible. I think that attitude is rather French, since football here is seen as a working-class sport. In England, Italy, Spain and all the world’s great soccer nations, everyone adores it. It’s the world’s number-one sport,” he added.

Burke said the two organizations share the values of excellence and team spirit, noting that Vuitton also produces trophy cases for the America’s Cup, the Roland-Garros tennis tournament and the Rugby World Cup. “As we like to say: ‘Victory travels in Louis Vuitton,’” he said.

He noted that the Soccer World Cup unites nations including China, though it only qualified once. “I remember during the last Cup in Rio, we couldn’t understand what was happening in China, because our sales were down,” he recalled. “They were watching games in the middle of the night and skipping work the next day.”

To mark this year’s event, Vuitton has produced a limited edition of 25 trunks containing 13 specially made reeditions of all the official Adidas match balls used at the World Cup since 1970, and an additional Louis Vuitton football made in natural cowhide leather, which will also be available to purchase separately.

One of the trunks, which cost in the region of 150,000 euros apiece, will be auctioned at a gala event in Moscow on July 9, with all proceeds going to Vodianova’s Naked Heart Foundation, which supports children with special needs.

The unique lot will contain the 13 official match balls from previous World Cups, each signed by a football legend, in addition to one of the official footballs played on the field during the 2018 World Cup final.

In her role as FIFA World Cup 2018 ambassador, Vodianova earlier this month accompanied football’s greatest prize as it flew into Russia by private jet at the end of a 51-country tour.

She recalled that as she caught sight of her smiling reflection in the gleaming trophy, it brought home her journey from a poor upbringing in Nizhny Novgorod to her current life with her partner Antoine Arnault, the son of LVMH chairman and ceo Bernard Arnault.

“It actually shows us that dreams are possible, and I’m sure that a lot of children and a lot of people in Russia who will see the trophy, who will witness the World Cup, they’ll understand that the world is so big and opportunities are endless,” she said. “With a little bit of chance, miracles can happen.”

Noting that Russians still lack understanding of people with special needs, she hopes to stage an inclusive football match on Red Square where youngsters will play with footballers, politicians and stars. “It’s going to be hopefully a moment to bring even more awareness,” said Vodianova. “Until those people are included, no country can call itself civilized.”