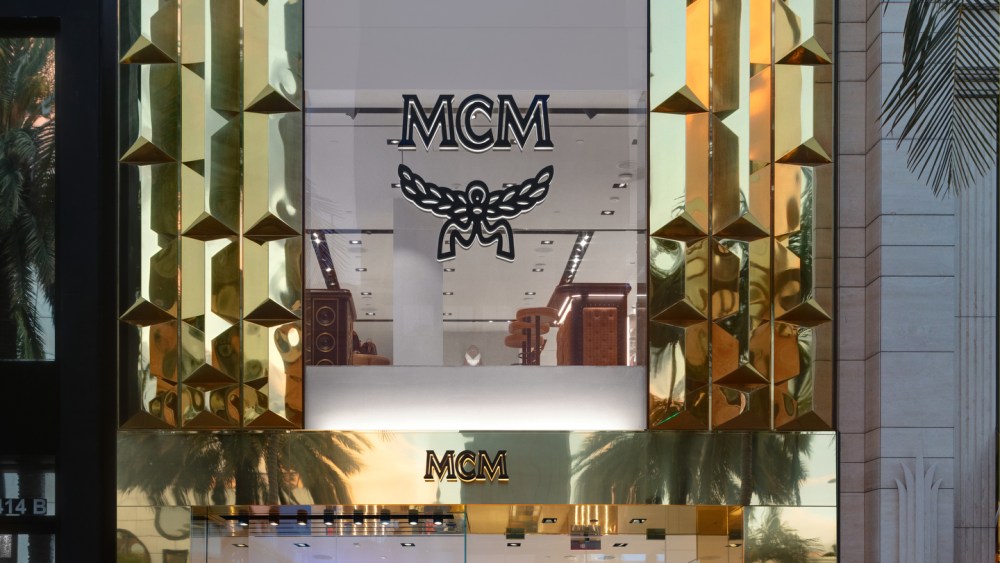 BEVERLY HILLS — The question of what an accessories brand could ever do with nearly 5,000 square feet of selling space on Rodeo Drive is not difficult to answer if you’re MCM and already plotting ahead.

The company this week officially celebrates the opening of its Beverly Hills flagship, split across two levels and complete with DJ booth, small bar, plush seating, LCD screens, grand staircase, bold facade and product exclusives as it stares straight into the $1 billion sales mark for next year.

“This was really a two- to three-year build up because it’s all about the right location,” said global president Patrick Valeo. “There’s plenty of locations, but Rodeo Drive was chief for the future of the brand, the growth of the brand and where we’re positioning the brand.”

The glamorous extrovert is how global creative officer Dirk Schönberger described the buildout, from the exterior to interior, and a nod back to MCM’s starting point in the Seventies with disco glam that’s helping the brand retain relevance among the next generation of luxury consumers.

“I love how this store is playing a little bit of a role in that, but it’s a modern version. It’s not retro,” Schönberger said. “Young kids are walking into the store, so it’s not like the old school luxury temple where I remember standing outside and didn’t dare walk in. This is a welcoming place and still it speaks luxury. It speaks really high quality.”

That accessibility is, in part, what has helped MCM notch some 1,100 percent in growth Statewide in half a decade, Valeo said. That’s accessibility to not only a younger customer but also to price points and being able to offer a range that could go from a $600 tote to a $3,000 bag.

“In luxury there’s always been a little bit of a snob element, which is probably somewhat deadened now,” Valeo said. “Most people have gotten away from that, but that’s not something we ever did. I always hear that we welcome all cultures, all lifestyles, all races — whatever it is, we’re a very big umbrella for people so they feel good in our stores, which is step one to get them in and to get them to come back.”

The company also isn’t overly saturated in the market, Valeo said. It’s key retail partners are Bloomingdale’s, Neiman Marcus, Saks Fifth Avenue and Nordstrom. It maintains true outlets and it’s not manufacturing product specifically for the off-price channel as is the case with some of its peers.

The cadence for MCM store growth should continue at roughly the same rate for the next three years. MCM counts about 600 doors globally, with 200 of those company owned. It’s expanding into Mexico this year and has plans for a Toronto store, in addition to Tampa, Chicago, Waikiki and Japan.

“With brick-and-mortar, while it’s important, you can’t be like the old days where you have a proliferation of stores,” Valeo said to temper the aforementioned growth plans.

MCM is also focused on ensuring its stores serve as true regional hubs and that’s reflected in the product with, for example in Beverly Hills, exclusives bearing the famed 90210 zip code on things like a license plate or sweatshirts and T-shirts.

“With global brands you tend to look everywhere the same, so for me it’s very interesting in the future to bring a regional touch where people [can buy] almost like a souvenir, like a concert T-shirt, that you bring home after an experience,” Schönberger said. “This is something I want to do on a global basis.”

That will also be balanced with a ready-to-wear collection that Schönberger sees as expanding under his watch.

“We are talking to a much younger consumer as traditionally the brand would have so the ready-to-wear will be a nod in that direction,” Schönberger said. “It will be luxurious, but very modern style. I want to avoid the word sportswear, because it’s not only going to be sportswear, but we’re really on the highest level in ready-to-wear. We’re going to make this crossover between tailoring, sporty and experimental fashion pieces in ready-to-wear. So I think it’s going to be an exciting trip this year.”

That tactic should also help as the company continues to solidify its place in the market and meet its first $1 billion target in 2020. MCM’s already looking ahead, with major potential in the add on. Things such as socks and underwear could arrive in stores as early as later this year. Valeo also pointed to a number of more recent collaborations, such as the $350 Wilson football done for the most recent Super Bowl or a pop-in with Nordstrom, that have helped open the brand to new consumers.

“If you think of where we’re at, we’re really a handbag and accessories brand,” Valeo said. “We haven’t even fully delved into shoes, a fragrance, watches — whatever it may be. We’ve just begun. That store is even bigger than we need on Rodeo, but it’s built for the future. So if you think $1 billion with what we’ve got [in the current product assortment], imagine we could double that with the right curated products, partnerships and collaborations.”