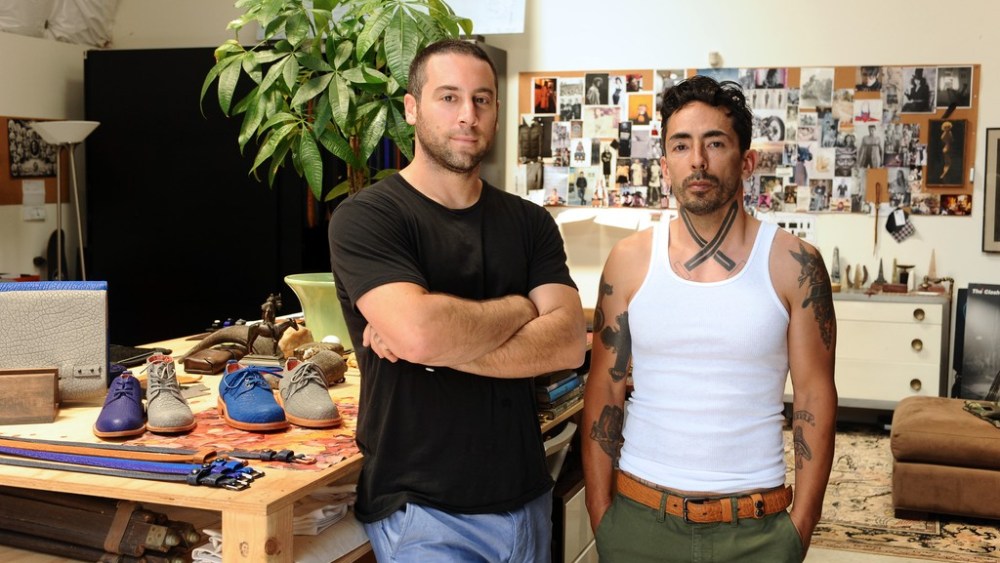 Launching next month at Maxfield in Los Angeles, Fivestory in New York and Huzza in Harbor Springs, Mich., the Emmeline and the Medicine Woman handbags ($900 to $950 wholesale) are, like the men’s wares, classic shapes meant to last a lifetime.

All pieces come in black, tan and gray, but the brand has also introduced purple and cobalt to the palette this season. Also new for fall is a collaboration with Los Angeles shoemaker George Esquivel for lace-up oxfords and ankle boots for men and women ($600 to $700 wholesale) and with Oliver Peoples for limited-edition sunglasses in a Parabellum case ($695 retail).

Launched in 2010 at Colette and Maxfield, the men’s line, which ranges from $60 wholesale for a key fob to $1,200 wholesale for a duffel bag, is worn by a diverse clientele that includes Arnold Schwarzenegger, Orlando Bloom, Anthony Kiedis, Mos Def and Giovanni Ribisi. The details, from laser-etched logos and numbering on each buckle to finely stitched corners, weren’t lost on women, who also began scooping up pieces like the narrow belt.

What differentiates bison leather from bovine leather is the deeply grained texture of hides — not to be confused with water-buffalo hides, which are thinner. Bison leather comes from free-range animals raised for meat in the Midwest. The older the animal, the deeper the grain, so the company uses bison ranging from seven to 30 years old.

Cofounders Mike Feldman and Jason Jones, both avid fans of Americana and new technology, wanted to combine the old and the new, so for the hardware, they sourced a ceramic typically used by the military as an antiballistic material on the outside of tanks or on vests. Each belt is also lined with Kevlar to ensure longevity. While there appears to be a military theme running through the brand—its logo is a “P” flanked by two swords, to signify past and present, and the phrase “si vis pacem parabellum,” is Latin for “desire peace, prepare for war” — Feldman insists they are a peaceful sort, noting the “righteous” way the bison are raised by small organic herders.

Jones, a Los Angeles native, first came across bison leather used in a holster in his stepfather’s antique store, Used Stuff. “I was taken with the patina it had after so many years. I knew it was something special,” he recalled. A self-taught designer who left school after ninth grade, Jones, 41, the brand’s creative director, began working in retail at 18 and moonlighting for designer Henry Duarte, known for custom leather outfits worn by rockers like Lenny Kravitz. Ever the entrepreneur, he later opened Acme, a Japanese anime culture and video-game store on Melrose Avenue.

Back then, Feldman, 36, owned a company called Pyramat, through which he sold a video-game chair he invented at age 22, which won the Best of CES award in the gaming category at the Consumer Electronics Show in 2003. He met Jones when selling the chairs to Acme, but both knew they had another calling.

“In a corner of the store, I saw these shirts Jason made, and I could tell he was a brilliant designer,” said Feldman. “We both knew we wanted to do something else, so when I sold my company, we had a golden opportunity to start our own thing.” The two formally incorporated Parabellum in 2007.

Feldman and Jones are fond of collaborations outside the fashion space. They created a table, with a bison-leather top and bronze base, for Blackman Cruz that sold for $20,000, as well as $4,200 leather medicine balls that will be in store in October. Next, they’re looking at doing interiors for the pricy Icon 4×4 off-road jeep. But both insist on keeping their brand’s distribution tight. The line is currently in 15 stores worldwide, including Bergdorf Goodman and United Arrows.

Their showroom, in a converted Hollywood garage where a taxidermied bison head hangs on the wall between the bags, is filled with horn cups, antique swords and other Americana, along with piles of hides waiting to go to their leather workshop nearby. Said Feldman, “In a perfect world, we’d be in a glass-and-concrete office on a couple hundred acres in Ojai [Calif.], with bison roaming around.”