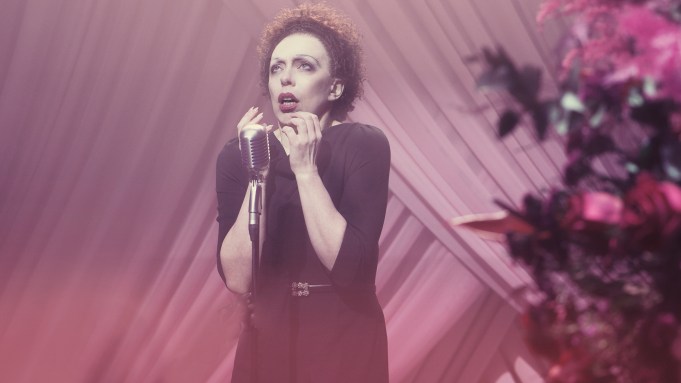 Many designers have been expressing nostalgia for the runway with their fall 2021 collection unveilings — and accessories specialists, too.

To wit: Roger Vivier’s creative director Gherardo Felloni created a film titled “Do We Show?” that expresses a yearning for the stage in a humorous and camp way.

Felloni recruited doppelgängers for Josephine Baker, Marlene Dietrich, Grace Kelly, Marilyn Monroe and Edith Piaf — all Vivier clients or muses of yore — and depicts them as front-row guests at a couture show that never quite gets underway. Bored — and seduced by the microphone, stage and spotlight — each takes a turn trying to perform without an audience.

“It’s an homage to performers in general,” Felloni explained Tuesday night as workers readied an installation in Vivier’s Paris salons that included faux couture gowns in a 1950s style and a row of empty chairs with invitations bearing the names of those five iconic woman. “We are missing shows. We are missing performers.”

Vivier was to welcome editors by appointment on Wednesday to view the collection.

The film is a hoot, the actresses in thrall of their juicy roles, and Felloni managed to find shoes from his fall 2021 collection that fit each character: discreet buckle-toe flats for Piaf, feather-trimmed and crystal-studded booties for Baker, and fierce, almost fetishistic riding boots for Dietrich.

Felloni acknowledged that the fall collection is sexier than usual, and includes his first high, platform heels. One of the styles with distinct toe dent was partly inspired by a pair of shoes belonging to Jeanne Moreau that Vivier purchased at auction last October when the French actress’ wardrobe went under the hammer at Artcurial in Paris.

He described his new bag Viv Choc as having the same spirit with its harness-like black leather strap and demonstrative hardware.

Count Felloni among designers who is banking on women wanting to dress up once the world emerges from confinement in the wake of the  pandemic — and one who felt the need to acknowledge the impact of canceled events, concerts, fashion shows and exhibitions.

“I think that we have to face this moment, and we have to try to find something funny,” he said in an interview. “We have to continue to make people dream because it’s my job actually, in fashion. Basically, it’s our job now to try to find a way to escape.”

EXCLUSIVE: Gherardo Felloni on His First Steps at Roger Vivier