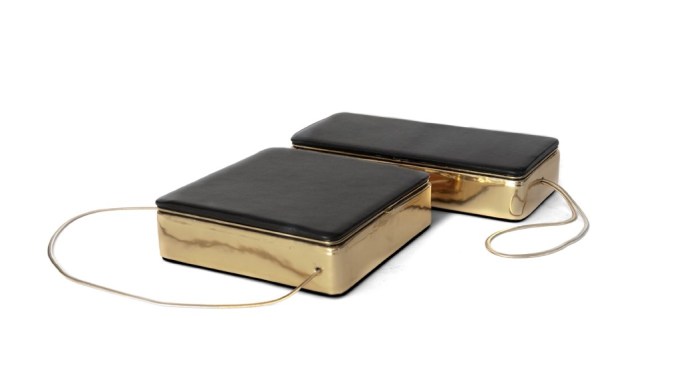 Luxe leather crafting might be a vanishing specialty, but several young independent designers are seeking out these artisans to help produce their luxury lines, using venerable techniques but with a modern aesthetic. Here are three of them, all based in Paris and all with annual volumes of less than 500,000 euros ($660,000).

“Before, Paris was a city full of leather artisans, and now you can count them on two hands; their techniques are amazing,” observed Reina’s design assistant, Jerome Schmidt. “It’s about playing with ancient codes and making them look modern. You learn with them as much as you push them to do something new.”

Case in point, the brand’s minimalist black box calfskin clutch, which literally resembles a box, featuring accordion gusset sides. The piece is made from one piece of leather, with a single line of stitching along the side.

Reina melds a modern minimalist look with vintage forms. An example is a purse-frame bag on which the bag’s leather also coats the metal purse closure, a technically complex feat that was achieved by a local artisan using know-how passed down through his family.

“Just the look of a purse frame screams vintage, so it was a real challenge to reinterpret it,” said Schmidt. Among the designs are a range of flat, square or rectangular clutches and wallets in matte black and metallic calfskin, or leather toiletry bags that zip open and snap together at the back to form an open container. The brand works mainly with untreated vegetal leathers, with the idea of allowing them to age and develop a patina.

Isaac Reina is sold in about 75 stores internationally, including Project No. 8 in New York, Le Bon Marché in Paris and LN-CC, a by-appointment London-retailer.

Pop into laContrie’s shop on Rue de la Sourdière and chances are the brand’s owner, Edwina de Charette de la Contrie, will be downstairs in the workshop running up a leather metro ticket holder on one of the atelier’s old industrial sewing machines or cutting leather strips for a line of belts.

It’s a bold career change for the gutsy designer, who worked in music and TV production before switching to pursue a personal dream: opening an atelier boutique specializing in semi-bespoke handmade leather goods.

The designer, who was motivated when she couldn’t find such a service, spent two years researching the market and training with a leather artisan before launching. Her small collection of bags includes an elegant kidskin or canvas-lined calfskin tote; a shoulder bag inspired by vintage cartridge bags and a retro bull calf and crocodile travel bag that clients can customize with materials, linings, hardware and pockets. They can also have their initials stamped or embossed on the design. A few men’s styles have just been added.

A stickler for quality and finishing, la Contrie does all of the design and sourcing. One craftsman oversees the entire production of each bag from start to finish.

“I wanted to be as autonomous as possible,” she said, adding that she likes the idea of offering the kind of service that existed in the “good old days,” when there was a real exchange with the customer.

With a staff of two resident artisans, orders take on average six to eight weeks to complete.

“The idea is to go back to stuff made with lots of emotion,” said Isabelle Bois, co-founder of Ragazze Ornamentali, an esoteric luxury lifestyle label offering unique artisanal design objects based on the concept of the “contemporary boudoir.”

The company was launched in 2009 with a collection of leather accessories. Items including jewelry, perfume containers, handmade writing paper and home objects will be added over time, made in collaboration with a pool of skilled artisans from a range of creative domains.

“[Ragazze Ornamentali] was conceived as a meeting of the arts, luxury and artisanal traditions,” said Bois, who met the brand’s co-artistic director, Valentina Tortorella, at Louis Vuitton, where they had worked as designers. “We shared this strong desire to create our vision of luxury and femininity. We both felt passionate about a number of the same things, notably the poetry of artisanal workmanship.”

Equipped with an interior envelope pocket and compartments designed to hold lipsticks, sunglasses, photographs and the like, Bois described the handbags as “portable boudoirs,” designed to accompany their owner through life, carrying the intimate objects she likes to surround her.

Bags start at 500 euros ($660) and all carry a mirror that can be engraved with the owner’s name. The brand is carried in 15 doors, including Le Bon Marché in Paris, Cara & Co. in Sydney and Estnation in Tokyo.