Britain’s most famous stationer will mark its 125th anniversary with a cocktail party at its newly refurbished and expanded Bond Street store. 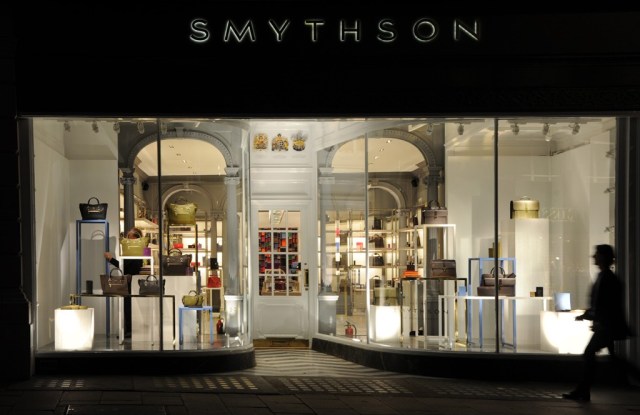 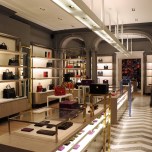 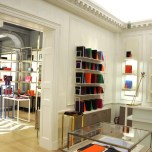 LONDON — Smythson may be best known for its deep blue writing paper, gilt-edged notebooks and diaries in a kaleidoscope of colors, but the brand is now ready to turn the spotlight on to some of its other assets.

Today, Britain’s most famous stationer will mark its 125th anniversary with a cocktail at its newly refurbished and expanded Bond Street store. Although paper products still play a starring role, the new look of the store places an emphasis on leather goods and on the lifestyle aspect of the brand.

“Smythson was a sleeping beauty; it was never broken or licensed out. What we’re doing now is refining it,” said Andy Janowski, who joined the company earlier this year from Burberry, where he had served as chief operations officer and senior vice president of supply chain.

Over the past few months, the brand has introduced new product categories, relaunched its Web site with cutting-edge technology and broadened its customization offer. But it’s the flagship, at 40 New Bond Street, that truly mirrors the company’s new attitude.

Janowski and his team — which includes Samantha Cameron, wife of Britain’s Prime Minister David Cameron and a Smythson veteran who now serves as creative consultant — blew open the store’s interiors, transforming back offices into selling space and doubling the size of the shop floor to 4,000 square feet.

“It’s about celebrating our extraordinary legacy and bringing it to life in an expression of contemporary classicism,” said Cameron of the store. “It’s a translation of Smythson’s intrinsic identity, and the key is in the detail. The concept of the store is not just spatial or visual; it’s a comprehensive, sensory experience.”

The new store is both playful and mindful of the brand’s heritage. Fixtures include a huge mirror encased in what appears to be a gilded Art Deco frame. On closer inspection, the “gold” is actually made from a series of little Smythson notebooks that have been lined up with only their gilded edges on view.

The back wall in the main hall features what could be a Piet Mondrian painting, but it’s really a big bookcase stacked with leather-bound notebooks in myriad shapes, sizes and colors. In the stationery room, artisans can customize products with gold stamping. In addition to their initials, customers can have personal messages or even their child’s sketches embossed on the leather books.

The familiar, classical columns and arches from the original interiors are still in place, while the floors are made from a mix of Carrara marble and English oak parquet arranged in a traditional herringbone pattern. Large leather goods take center stage in the main hall, and there’s a simple reason for that: Smythson isn’t an empire built on paper. “Seventy-five percent of the business comes from leather goods. Ten percent comes from stationery,” said Janowski. “This hall will change people’s perception of the brand.”

Janowski confirmed that the Smythson group, which incorporates Smythson and Tivoli SpA, the Italian leather goods manufacturer, has sales of 100 million euros, or $129.2 million at current exchange rates. Sales have grown at a double-digit rate every year for the past four years. Smythson is owned by Jacques Bahbout, who purchased the brand in 2009 and whose title is chairman.

Products in the main hall range from myriad iPad, iPhone and Kindle covers and wallets in calfskin to the brand’s latest hero, the Eliot bag, which is made from shrunken bull, with 14-karat gold hardware and shagreen details. The large size costs 1,395 pounds, or $1,800, and has a special slot for an iPad in the inside lining.

The bag also comes in snakeskin and crocodile, with the latter costing 18,000 pounds, or $23,220. Bags made from exotic skins are housed in the “handbag salon” in a part of the store that once contained stationery.

Smythson’s bags are made at its two British factories and one Italian factory. The company also shares a French tannery with brands including Hermès.

There’s a new room dedicated to men’s accessories — Smythson has added leather belts as a new category — and one for the new home collection, which includes picture frames, cashmere throws and stackable leather-covered trays.

The bespoke stationery room is more interactive than before, allowing customers to pop open drawers and handle writing paper, business cards and invitations.

Janowski, who declined to give any sales projections for the brand or the store, said while Smythson is focused on growth, the main priority right now is quality and “delivering the extraordinary to the customer.”

He said there are plans to renovate the current fleet of Smythson stores and to open new ones, although he declined to lay out details. Smythson currently has 12 retail outlets and a limited wholesale distribution at stores including Barneys New York. “We’re all about triple-A real estate; we’re not a high-street brand, so it’s hard to put a number on it,” he said of the store rollout strategy.

In another move to revitalize the retail experience, Smythson has revamped its Web site, which now screens films — by Brits including Carter Peabody and Matthew Donaldson — that highlight the history and craftsmanship of the brand.

The jewel in the crown of the new site is a pioneering technology that’s unique to Smythson, a “responsive template” that automatically recognizes what type of device the customer is using and formats the Web site to accommodate it. Usually, different devices require separate apps, which means a shopping basket stored on an iPhone can’t be transferred to an iPad.

“We want people to say ‘Wow! What a lovely shopping experience at Smythson,’” said Janowski. “And we want to make sure shoppers find the same luxury online as they do in the store.”