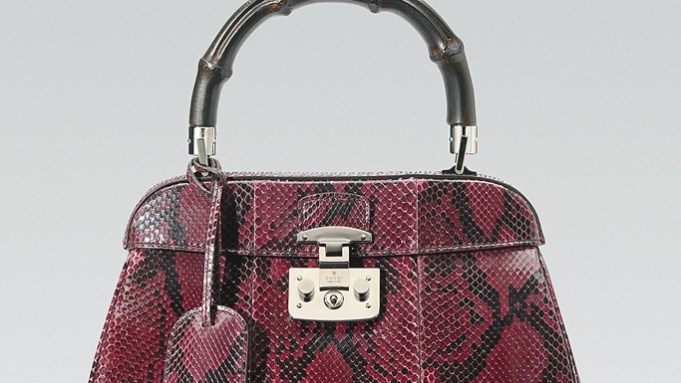 The cost for the high-quality crocodile skin needed to make a purse? About $1,500 to $4,000 depending on the size, according to market sources.

No wonder the newest competitive frontier in Europe’s luxury sector is for suppliers of the rare raw materials and technical know-how needed to make its high-margin products.

The pace of deals has multiplied in recent years in tandem with robust demand for luxury goods, setting off bidding wars for top factories and sending their valuations northward.

In March, Kering, the French parent of brands including Bottega Veneta, Gucci and Brioni, said it acquired a majority stake in Normandy-based crocodile tannery France Croco, the latest in a flurry of transactions that have seen Europe’s biggest players beef up their production holdings.

Other key deals in the past year include Hermès Cuirs Précieux, the tannery division of Hermès International, acquiring French calf leather specialist Tannerie d’Annonay; Compagnie Financière Richemont taking a 100 percent stake in Varin-Etampage and Varinor (VVSA), a manufacturer of high-end, stamped exterior components for watches, a gold refiner and a producer of semifinished precious metal products for the watch and jewelry industry, and LVMH Moët Hennessy Louis Vuitton’s purchase of Les Tanneries Roux, a French producer of supple calf leathers.

Chanel declined to comment on speculation it recently added a calfskin tannery to its arsenal of specialty ateliers.

Hermès International is considered a pioneer in securing key supply streams, buying its first tannery, Gordon-Choisy, back in 1996. Chanel was in the game even earlier, snapping up button maker Desrues back in 1985.

Acquisitions of suppliers dropped off sharply during the 2008 financial crisis and its aftermath, suggesting a strong correlation between luxury demand and deal flow, Ohana noted.

Today, with interest in suppliers on the rise, valuations for top players are “in the double-digit EBITDA [earnings before interest, taxes, depreciation and amortization] multiples, which was not the case a few years ago when those companies were seen simply as factories,” Ohana said.

He noted valuations can go higher in cases where the producer in question has large and valuable inventories. A case in point is Singapore crocodile tannery Heng Long International Ltd., which fetched a valuation more than 20 times EBITDA in 2011 when LVMH reached an agreement to jointly own and run the firm with the Koh family.

On the other side of the table, remaining suppliers — typically skill-based, family-owned enterprises — are tempted by rising valuations, and alarmed by the critical production mass the big groups are assembling, reconfiguring the competitive landscape.

Concetta Lanciaux, who runs a namesake luxury advisory, calls the sector’s current focus on suppliers and logistics the “third phase of luxury,” after Europe’s main players devoted the Nineties to acquiring brands, and the next decade to global retail expansion.

“The last decades have been periods of abundant supply, but growth of global demand has created a scarcity of resources and caused prices to skyrocket,” she said, citing cashmere as one example.

According to a spokeswoman for Kering (the former PPR), controlling some tanneries enables its brands “to secure more high-quality skins for its brands in a context of scarcity. Further integration of suppliers is not a strategy per se, but it is sometimes in the brand’s best interests to secure the supply of certain materials and to internalize certain savoir faire.”

Lanciaux characterized the shift to more vertical production processes — more common in hard luxury categories such as jewelry — as a positive development for leather-goods players.

During the industry’s acquisition phase, brand owners often installed designers, which enhanced product and image differentiation, as did the subsequent decade of retail rollouts. “The supplier and logistics phase will bring about more identity, guaranteed and unique know-how and quality; and more control over counterfeits,” she said.

Lanciaux noted that robust demand for luxury goods — with many top firms reporting revenue gains in the neighborhood of 20 percent in 2012 — has “gradually overextended the value chain, making it increasingly difficult to control the quality of suppliers and of the materials used in productions, often spread throughout different countries and continents,” she explained.

In fact, Lanciaux predicted that brands might one day tag their products with the origins of materials.
“Access to top material resources is fast becoming a key point in luxury groups’ competitive advantage as it is paramount to the protection of the brand identity and image, as well as commercial margins,” she said.

Ohana agreed quality attributes of luxury products — and not just design and prestige — is becoming a primary talking point for consumers and investors alike.

“As customers are becoming more demanding and sophisticated, they want to know they’re buying something authentic — made by craftsmen, and unique,” he said in an interview.

Meanwhile, for investors interested in acquiring luxury labels, their brand image, retail network and expansion potential are not the only determining factors.

“Buyers now typically ask, ‘Do they have their own workshops?’ This is not a question that was asked five years ago,” Ohana said.

He said competition is currently keenest for suppliers of exotic skins such as crocodile, ostrich and python; and watch components as Switzerland’s Swatch Group is poised to secure a long-sought deal to cut sales of completed watch movements — the mechanical hearts of a watch — and of essential regulating mechanisms, which include high-tech hairsprings.

According to Heng Long’s initial public offering prospectus, issued in 2008, its directors considered it one of only five top-tier crocodile tanneries in the world: two of which are today controlled by Hermès and the remaining two by Kering.

“The second-tier tanneries would comprise about 20 situated all over the world, either close to the market or sources of supply,” the document said. It also noted that Heng Long produces about 281,000 skins per year, and supplies high-end watch-strap-makers and such fashion and leather goods players as Prada, Stefano Ricci and Nancy Gonzalez, along with local brand Kwanpen.

When luxury groups acquire tanneries, they usually maintain existing supplier relations as the quality grades and size of skins vary, and they prefer to keep a range of customers to manage inventory levels.

According to sources, most high-end crocodile tanneries target around 50 customers. However, it is understood that luxury groups that own their own tanneries typically reserve the best skins for themselves.
While most recent supplier transactions have been in watches and leather goods, Chanel has been active in apparel, buying up specialty couture ateliers, which it applies to its high fashions and deluxe ready-to-wear.

Last year, Chanel added Scottish knitwear specialist Barrie, which had entered administration, to its array of ateliers, which are grouped under its Paraffection subsidiary.

“Without investment and deprived of successors, they might have vanished,” he said. “We are still open to new investments and to new partnerships. We have to think ahead. What is today a safe activity tomorrow may become an endangered [skill] to protect and promote.

“They are the real suppliers of our trade, and have the real knowledge that constitutes our heritage and ensures the continuity of our business,” he continued. “If we lose their know-how, we lose all the products that come from these ateliers, so we need to keep them alive.”

“The archives of these ateliers represent a powerful cultural and artistic heritage, and are a source of inspiration for the designers who come to consult them,” he said.

Pavolvsky stressed that keeping its suppliers independent is also crucial, so that Chanel remains but one of their clients.

“We want these artisans to keep their creative freedom and independence, while ensuring the continuity of their craftsmanship,” he said. “When working in creativity, you need to work with other companies to be on the edge of the savoir-faire and be challenged by other designers. The more the ateliers are contributing to other brands, the better.”