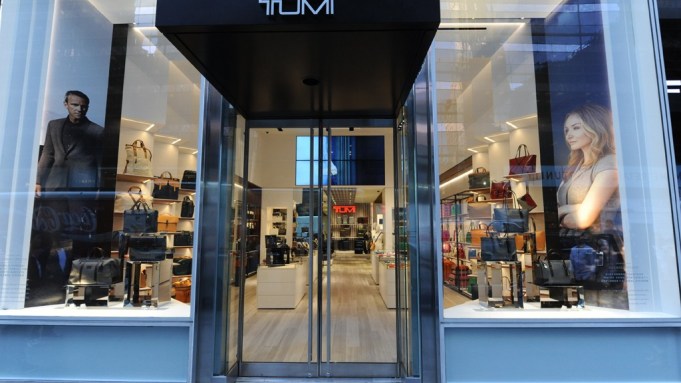 The accessories brand will unveil a new concept for all of the company’s stores and shops-in-shop when it opens a flagship here today.

Located at 610 Madison Avenue, the 1,800-square-foot store will be considered Tumi’s main New York location, as its current flagship on 520 Madison Avenue will shutter early next year.

The new concept is meant to highlight Tumi’s product through the use of lighter-colored wooden furniture and custom-made shelves, according to Dror Benshetrit, who designed the space.

“Tumi’s product is mostly dark so the best thing is to make the store interior clean,” Benshetrit said, explaining that he spent time focusing on “refinement” and store “flow” in order to best showcase the brand’s luggage, handbags and other accessories.

Benshetrit, who designed Yigal Azrouël’s Meatpacking District and Madison Avenue boutiques, as well as Cut25 by Yigal Azrouël in SoHo, literally elevated Tumi’s product by creating platforms so that shoppers could handle the merchandise.

In the past, the designer explained, Tumi displayed its luggage on high shelves that kept product out of reach from most consumers. Now bags will be more “accessible,” he said, adding that with the creation of new, angled display bays, shoppers will get to see the product from all sides.

This 90-degree fixture will be present in shop windows, as well as in Tumi’s shops in the doors of retail partners globally.

Macy’s Herald Square will be the first partner to utilize this fixture in both its men’s store and luggage department this week. Tumi’s first retail location at the Yorkdale Shopping Centre in Toronto will be next to receive the new fixtures and store-look when it opens in mid-November.

The Madison Avenue store features LED lighting, a 12-foot flat-screen television that plays Tumi’s advertising campaigns and polished metal fixtures with wood detailing. The floor plan will be reorganized so that shoppers first encounter the brand’s small leather goods and accessories, followed by handbags and, lastly, its luggage line. Men’s and women’s collections are separated, and there will be a monogramming station where shoppers can customize their purchase.

Previously, monogramming took place in the backroom of the store, but bringing the process to the consumer “elevates” the experience and the brand, according to Alan Krantzler, Tumi Holdings Inc.’s senior executive vice president of brand management.

In order to further elevate and evolve the brand, Tumi is looking to retail expansion and a fresh marketing campaign, Kranzler said.

This year, the brand will open five new doors in the U.S., and in 2014, it will open more than 20 stores domestically and a “handful” of stores internationally, with a primary focus on the U.K. and France.

Krantzler told WWD that Tumi has been in the process of not only “tweaking” its store look since 2007, but it has also spent time evolving its marketing campaign.

“They are all Tumi users and they share their stories about how they pack and use the product,” Krantzler said.

The fall campaign, which launched globally in August and made its New York debut on Tuesday, includes digital and print advertising, as well as in-store signage and New York-centric ads on billboards and on taxi tops.

For the U.S.-targeted part of the campaign, Tumi has spent about $1.5 million, and according to Krantzler, 15 percent of the budget went to print, 30 percent to digital and 55 percent to outdoor.

International, which includes markets in Hong Kong, South Korea, Taiwan, Shanghai, the Middle East and Russia, amassed a budget of roughly $3 million. Tumi said the funds were split equally between print and out of home.