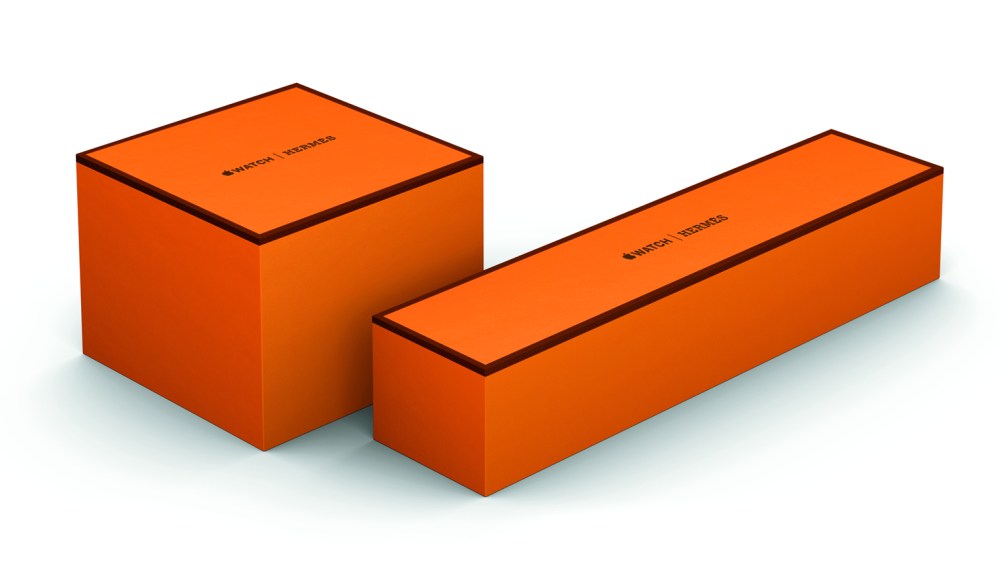 When Tim Cook came on stage in San Francisco last month, early predictions of Apple’s news included updates for Apple TV, the iPad and the iPhone. But the Apple Watch? No, it had just come out in April, and experts thought it was too soon for additional designs from Apple’s first true foray into fashion.

Turns out, Apple-watchers and the fashion world were in for a surprise that became perhaps the most highly anticipated of the day (for the fashion flock, at least): A collaboration between Apple and Hermès. And, finally, the Hermès Apple Watch will arrive in stores on Monday.

The three designs merge the classic leather bands of the historic Hermes brand with the brain of the Apple Watch, with five leather options. And although each brand is known for its iconic packaging, this time, Hermès’ classic orange won out. This will be the first time ever that Apple has diverged from its white package.

In a release revealing the collection, Hermès executive vice president in charge of artistic direction Pierre-Alexis Dumas compared the collaboration to a horse and carriage, “a perfect team.”

“What more contemporary and relevant expression of this principle could there be,” he said, “than this collaboration with Apple?”

Each stainless steel case of the watches includes an etching of the Hermès signature and a customizable face with three dial designs inspired by Hermès watches. The orange box in which it comes also features, in addition to the Hermès logo, an imprint of the Apple logo.

The watches are $1,100 to $1,500 and come to select Apple retail stores, Hermès stores, specialty stores and department stores in Australia, Canada, China, France, Germany, Hong Kong, Italy, Japan, Korea, Russia, Singapore, Switzerland, the U.K. and the U.S. — 15 total in the States — on Monday.

When the first Apple Watch designs became available in April, the fashion world’s early adopters gravitated to the Modern Buckle, which includes a leather band. But with this new, albeit more expensive offering, it will be interesting to see just how much fashion fans are willing to invest in a smart watch.