As Time Goes By: Cartier’s Watches

Watches are a long-standing tradition. 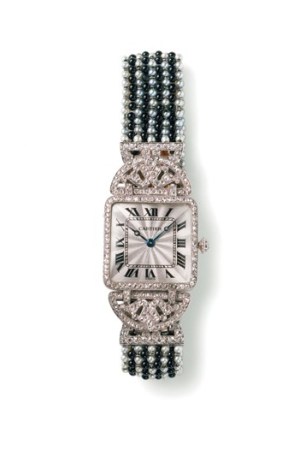 Cartier may have started in jewelry, but the celebrated Paris maison has been a serious watch player for over a century.

The first veritable page in its legacy in watches was written when aviator Alberto Santos-Dumont asked his friend, Louis Cartier, in 1904 to make a wristwatch on a leather strap he could read when piloting his aircraft. The square, elegant Santos watch, which has always been called as such, was launched in 1911 and opened a door through which Cartier stepped boldly. Before that key moment, the company produced mostly pocket watches and clocks, including the splendid “mystery clocks” with invisible hands it continues to manufacture today. The Santos was reintroduced in 1978, fitted with a gold and steel bracelet, materials never associated with it before. More recently, it was reintroduced to great success.

Another iconic watch style, the Tank, was designed in 1917 by Louis Cartier. It is said to have been inspired by the lines of a Renault military tank used during World War I. The first prototype of the Tank watch was presented to General John Pershing, commander of the American Expeditionary Force in Europe. With its economy of line, the watch represented a stark break from the twists and twirls so popular at the time. Success was immediate and longlasting. Celebrities who have worn the watch include Jacqueline Kennedy, Michelle Obama, Jennifer Aniston, Renee Zellweger, Ben Affleck, Andy Warhol, Angelina Jolie, Catherine Deneuve, Elton John, Salma Hayek, Andy Garcia and Princess Diana.

No matter its many stylistic peregrinations, Cartier’s watches are underscored by the house’s origins as a jeweler. This sets it apart from most other Swiss watch players, which are more focused on the technical innards of the watch than its exterior shell, with a more sensual aesthetic.

“Our positioning is very feminine,” says Hélène Poulit-Duquesne, director of watch marketing and development. “The originality of our watches comes from our beginning as a jeweler.”

A particular Cartier hallmark is the abundance of forms in its watches. There are styles that are oblong or asymmetrical. Others look like animals. Unlike many other companies, the majority of Cartier’s watches are not round.

Despite its long history in watches, Cartier often finds itself defending its legitimacy in the technical watch business for exactly the same reason that makes it unique. But having a shell worthy of its jewelry heritage hasn’t kept Cartier from emphasizing quality inside.

At the start of the 20th century, many of the components for Cartier watches were provided by master watchmaker Jaeger-LeCoultre, which today is part of the Compagnie Financière Richemont luxury group, as is Cartier.

In the Seventies, however, Cartier’s then-president Alain Dominique Perrin formulated the idea for Les Must de Cartier, which was designed to open the Cartier door to a greater number of clients. Mechanical pieces were replaced by less-expensive quartz movements — though Cartier continued to make intricate watches, too. But Les Must became the main driver of the business.

Watches became a focus for growth and materials became more affordable. Quartz movements were employed, and watches were fashioned out of less noble materials, including silver and vermillion. Success was fast and significant.

With time, though, Cartier again wanted to take its watch production a notch upmarket, mirroring the overall trend to higher quality and more complicated watches among leading players. In recent years, Les Must watches were phased out as the market moved back toward more complicated mechanical pieces.

So at the beginning of this decade, the firm began to revisit its watch business. It relaunched the Santos and introduced the Pasha and Roadster lines, which have become pillars of the division. The Roadster, introduced in 2001, was inspired by the automobile design, hence the name. With its cone-shaped sapphire glass and magnified date window, it proved very popular.

Two years ago, the Ballon Bleu, a round watch with a curved crystal, was introduced to great success. Already, Ballon Bleu accounts for a third of Cartier’s overall watch business, according to Poulit.

Watches today account for about half — or around $1.3 billion — of Cartier’s overall business, which is estimated at about 2 billion euros, of $2.65 billion at current exchange. Growth efforts continue. Last year, the company opened a high horology atelier in Meyren, just outside of Geneva, to allow it to make more complicated pieces. Ten people worked in the atelier last year under the direction of Cartier’s “high priestess” of movements, Carole Forestier, who developed Cartier’s first totally in-house movements.

The atelier has given Cartier new legitimacy in the sometimes-snobby watch trade by investing it with the highly coveted Geneva Hallmark, a sign of the best quality movements that is shared among the world’s best brands.

“It’s one of our main strategic moves — to develop a very high positioning in complicated men’s watches,” Poulit-Duquesne explains.

But high-end chez Cartier doesn’t only entail complicated mechanisms inside. The firm continues to emphasize its jewelry heritage with watches through its high jewelry watches, many of which are dappled with diamonds and emeralds and formed in the shape of animals or other fantastical forms. “We are jewelers first,” says Poulit-Duquesne.