After a tough and lingering slog, watchmakers hope they’ve turned the corner and are holding their breath about the year ahead. 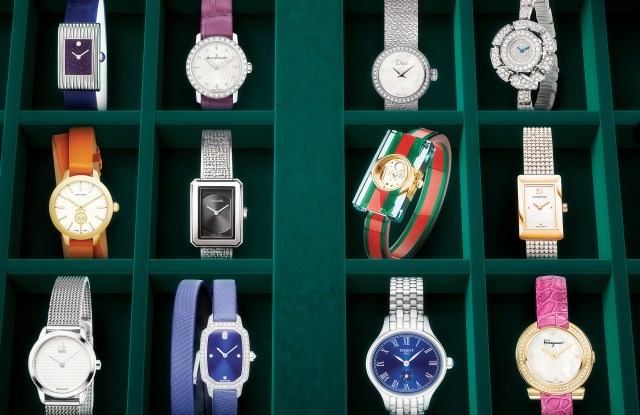 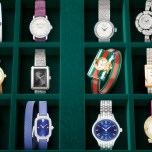 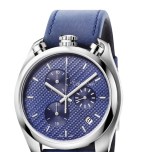 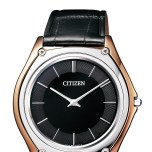 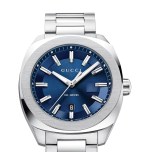 That seemed to be the unofficial motto at the Baselworld watch and jewelry fair as watchmakers unveiled their strategies for beating an extended market slump, ranging from lowering prices and boosting marketing spending to introducing smartwatches and more women’s styles.

Executives at the big conglomerates — Swatch Group, LVMH Moët Hennessy Louis Vuitton and Kering — put on a brave face, but many admitted they would be satisfied if they end the year with business stable.

“I don’t see a huge drop, but definitely not a huge increase,” said Marc Hayek, chief executive officer of Breguet and Blancpain. “We’ve seen a very difficult January, February in most brands.”

While comparable sales are set to improve in the second half, the market is beset by negative factors including the strong Swiss franc, weak demand in Hong Kong, terrorist attacks in Europe and uncertainty ahead of the U.S. presidential election, which traditionally weighs on watch sales.

Swiss watch exports fell 3.3 percent in February, marking their eighth consecutive month of decline, according to the Federation of the Swiss Watch Industry. It forecasts foreign sales of Swiss timepieces will remain stable, at best, this year after posting a 3.3 percent drop in 2015, their first annual decline since 2009.

The number of buyers and visitors at Baselworld was down 3 percent year-on-year to around 145,000, although media attendance rose 2.3 percent, organizers said.

“Some people made the decision not to come for cost reasons,” said Elie Bernheim, ceo of Raymond Weil. Although revenues at the independently owned brand grew 5 percent in 2015, his outlook was cautious. “I do not expect big growth this year. If I do at least what I did last year, I will be very pleased,” he said.

Raymond Weil lowered its prices by 2 percent on average in order to be more competitive, but the issue of pricing once again divided exhibitors at the fair.

“There is a rule in this profession — you don’t reduce prices,” insisted Walter von Känel, ceo of Longines. The brand, which rules the middle market and is heavily exposed to Greater China, saw sales plummet 40 percent in Hong Kong last year. “I multiplied my turnover by nearly five over the last decade and in 2015, I was flat.”

The executive, known affectionately as The Colonel due to his military past, uses tactics like group singing sessions to pump up his staff. “You have to motivate the troops, you have to galvanize them, you have to be positive,” he said.

Jean-Claude Biver, ceo of Tag Heuer, hopes it will grow 6 percent in 2016 following a wide-ranging repositioning. “The entry price point is the basis of a company. It’s like a staircase: if the first step is a foot high, everyone can climb the stairs,” he argued. “So the entry price point must be broad, easy to reach and enticing.”

Even Tag Heuer’s high-end pieces are aggressively priced. Its Carrera Heuer-02T offers an in-house movement equipped with a tourbillon complication for a market-defying price of $16,000. By comparison, the cheapest tourbillon at sister brand Zenith is the El Primero Tourbillon Skeleton, billed as a bargain at $47,600.

Chopard marked the 20th anniversary of its L.U.C. collection with the L.U.C. Perpetual Twin, the first in-house movement launched exclusively in a steel case, retailing for $25,760.

“For those who really enjoy watchmaking, they may not want to spend $50,000 on a gold perpetual calendar, but they may be OK to spend less and have a beautifully crafted steel case, which is still a beautiful object at the end of the day,” said Chopard co-president Karl-Friedrich Scheufele.

Peter Stas, ceo of Frédérique Constant, said its competitive price positioning helped it weather the previous crisis in 2008 and 2009, but he anticipated a difficult year.

“Those watches that were supposed to be sold in Hong Kong, China and a little bit in Russia, they surface everywhere. They surface in the gray market, they surface in the stores with certain brands giving up to $300, $400 incentive for every watch sold, just to try to push out the overstock, and of course, this is also affecting us,” he said.

“In 2017, we hope that some of the overstock problems around the world have been solved and retailers can really concentrate again on more constructive matters, instead of just trying to stay afloat,” he added.

Some believe the influx of watches on parallel markets will change the face of watch retailing.

“I think that all the problems that we have now in the real world will be a booster for the e-commerce business,” said Paolo Marai, president of the Swiss luxury division of Timex Group.

The company sells its Versace and Salvatore Ferragamo brands on Amazon in the U.S. and is working to sell regular-priced product with Chinese online retailers Secoo and Vipshop. “Either you do it, and you control it, or somebody else will be doing it,” said Marai. “So it’s much better that you start working with all these platforms.”

Bulgari, on the other hand, plans to open or renovate 15 stores this year to capture rapidly changing tourist flows.

“You can see very quick shifts and obviously the winning companies will be those with a global network, including in travel retail, capable of permanently adapting their assortments to a shift,” forecast Bulgari ceo Jean-Christophe Babin.

The Roman brand unveiled a new high jewelry watch collection, Serpenti Incantati, and a technological feat, the Octo Finissimo Minute Repeater, presented as the world’s thinnest minute repeater — a watch that chimes the time on demand.

It was one of several models that grabbed the attention of watch connoisseurs.

Within hours of publishing its Baselworld novelties, Rolex was fielding phone inquiries for the new steel version of its Cosmograph Daytona, despite its $12,400 price tag.

Patek Philippe wowed critics and collectors with its World Time Chronograph Ref. 5930, which pairs its patented world time mechanism with a proprietary chronograph movement. The watch will retail for $73,700.

Omega harked back to a sought-after version of its Speedmaster, a.k.a. Moonwatch, released in 1959. Featuring a silvery dial with three blue subdials, the CK2998 will be available in a limited edition of 2,998, priced at $6,500.

“We’re not a fashion brand, we’re not a hype brand, we’re not a bling-bling brand — we’re basically a watch brand that’s trying to make the best watch for a lot of people,” said Omega ceo Stephen Urquhart. “We’re a big industrial brand. I always say, every day we have to sell 2,000 watches over the counter.” Omega will step up its marketing spend this year as official timekeeper of the Summer Olympic Games in Rio de Janeiro.

Hublot also plans to increase its marketing budget, by 10 percent, as timekeeper of the Euro 2016 soccer championship but it will curb costs in other areas. “We are not hiring as we used to hire in the last two years,” admitted ceo Ricardo Guadalupe.

Swarovski expects to spend an extra 15 percent on marketing activities this year.

“You have to be anti-cyclical in your activities, otherwise you will just go with the flow and if the flow goes the wrong way, you go the wrong way as well,” said Robert Buchbauer, head of Swarovski’s consumer goods business. “Of course, we have to cut back on a lot of nice-to-haves, but those are must-haves. You need to be heard in the market.”

Ulysse Nardin put design and communication at the heart of its new strategy, dubbed “Roadmap 2020,” marking its 170th anniversary with a new advertising campaign and slashing the number of references in its collections by 40 percent.

“The message today has to be much clearer than in the past. When you look now at how our collections are divided, it’s according to design. In the past, it was according to the movement,” said Patrik Hoffmann, the firm’s ceo.

Citizen put the accent on technology, celebrating the 40th anniversary of its Eco-Drive technology with the Eco-Drive One, billed as the world’s thinnest light-powered watch. Available in a limited edition of 800, it will cost $6,000.

Unlike last year, smartwatches were not the main talking point of the fair, although there were some significant introductions in the segment.

The most unexpected was the Samsung Gear S2 by De Grisogono, studded with more than 100 black and white diamonds. At 14,900 Swiss francs, or $15,000, it probably qualifies as the world’s most expensive smartwatch.

Tissot presented the Smart-Touch, an evolution of its existing T-Touch model that can be connected to a smartphone, in addition to peripherals that allow the wearer to track objects and receive detailed weather reports.

Fossil Group confirmed it would launch more than 100 wearable products for eight brands by the holiday season. Michael Kors ceo John Idol flew in for a press conference in the group’s new headquarters to introduce its Access smartwatch.

“We think that over time it is going to be not only a very meaningful part of our business, but we believe that one day every watch we make will be connected,” Greg McKelvey, executive vice president, chief strategy and digital officer at Fossil Group, said of the firm’s smartwatch push.

“We sell 30 million watches a year and all they do is tell time. Imagine now if we can have the same branding and design and styling, but now every one of them has enhanced functionality that matters to customers. If you think about that for a second, then this has massive scale,” he added.

Ulrich Grimm, creative director of shoes and accessories design at Calvin Klein, said it was debating whether to enter the category. “We want to be right and we want to be really also useful and relevant, to not bring a gimmick to the table,” he said.

Gucci has postponed the launch of the smartband it is developing with Black Eyed Peas frontman Will.i.am, but it presented a new store concept and redesigned watch and jewelry lines, courtesy of creative director Alessandro Michele.

“It’s been beyond expectations,” Stéphane Linder, president and ceo of Gucci Timepieces and Jewelry, said of the impact of Michele’s designs.

Among Gucci’s new offerings are runway pieces, like the Plexiglas bangle in its heritage green-red-green “Web” strip, and the new GG2570 line for women and men, which channels a Seventies vibe with cushion-shaped cases.

“With a fashion brand with a big name, we are maybe more resilient because the brand is so strong anyway,” said Linder.

Chanel unveiled additions to its Boy.Friend collection, launched last year, ranging from upscale models with diamond-paved dials to a more day-friendly version on a Milanese mesh bracelet stamped with a tweed pattern.

Dior also harked back to its couture roots with limited-edition timepieces like the Dior VIII Grand Bal Plissé Ruban, featuring an oscillating weight on the dial set with diamonds and mother-of-pearl, in a design reminiscent of a pleated petticoat.

They were part of a strong offering of women’s timepieces at the fair, including a large selection of diminutive watches. Blancpain celebrated the 60th anniversary of its Ladybird watch, originally touted as the world’s smallest round watch, with a limited edition of 60 with a diamond-set bezel and a mother-of-pearl dial priced at $19,300.

Boucheron, in the midst of a reorganization under new ceo Hélène Poulit-Duquesne, highlighted its Reflet watch, launched in 1947, which comes with an interchangeable strap in more than 60 options. Two new versions, both in a limited edition of 88, featured dials made from aventurine glass or marble.

Jacques Panis, president of Shinola, explained the allure of the female customer.

“Ladies are more apt to buy multiple watches and have watches as a part of their wardrobe and match to what they’re wearing on a daily basis,” he said. “They’re potential repeat customers.”