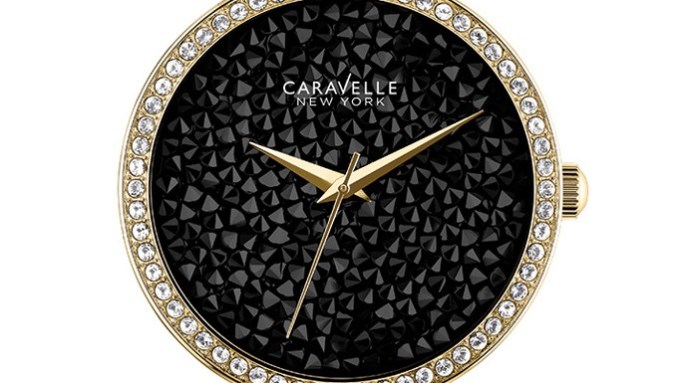 Set to hit stores on Tuesday, Caravelle New York, which will include men’s and women’s watches as well as chronographs, is the brainchild of Gregory Thumm, Bulova’s recently appointed president.

“The whole watch product category is pretty penetrated these days. There are so many brands out there. It can diminish the consumers’ choice,” Thumm said. “I took that into consideration.”

With hopes of infusing Caravelle with more fashion and an element of “storytelling,” Thumm focused on creating a “cool, cohesive branded version” of the original line.

“Watches today aren’t about timekeeping,” Thumm said, explaining the importance of updating Caravelle’s look. “For the most part, consumers are concerned with wearing watches as an accessory.”

This translates into a collection with 80 different watches, priced from $60 to $135. Materials include rose gold, stainless steel, leather and metal bracelets and vibrantly colored silicon. Watches range in size from an oversize dial at about 44 millimeters to a smaller, 17-millimeter dial, and include watches on bangles for women, opening at $59.

The rollout of Caravelle will include a social media, Web and print campaign in the coming weeks. What makes the collection particularly interesting is that Bulova decided to lower its original Caravelle price range, which hovered between $80 and $195, Thumm said, explaining that he’s noticed a “white space” in the competitive fashion watch category.

“We’ve reduced price points to create a much more distinct line [in the market],” he added. “We thought it would be a great place to reposition Bulova in the market.”

With Michael Kors’ fast-growing watch business and rivals such as Fossil, Coach, Swatch, Movado, Seiko and other brands crowding the marketplace, Bulova, through Caravelle, is hoping to catch a new customer seeking compelling value.

Taking cues from the competition — especially Kors — Thumm said consumers should expect Caravelle to take inspiration from current fashion trends for upcoming collections. What Kors has done is to pair its handbag line with its watch line, explained Thumm, but that’s not all the brand has accomplished.

The speed-to-market for rivals such as Kors has been much faster than that of Bulova — until now. As part of his mandate, Thumm has “reshuffled” the supply chain to manufacture and produce much faster than before.

By coupling the faster supply chain with launches — which include a diamond-centric product range using less expensive Japanese movements over Swiss movements, as well as a Swiss-made collection — Thumm is hoping to inject energy into the 138-year-old Bulova.

While price points for higher-priced lines extend up to $2,000 now, Bulova isn’t abandoning its core customer; instead the company is relying on fresh product, storytelling through advertising and marketing, as well as new partnerships as a way to shake things up.

“When you’re changing the direction of a brand, it has to be done as a transition,” Thumm offered.