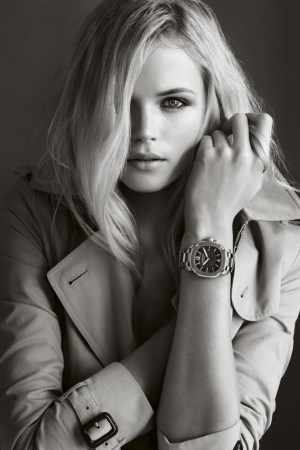 LONDON — Burberry has a new high-end watch up its sleeve: The Britain.

Designed by chief creative officer Christopher Bailey, the watch, for men and women will launch Oct. 3 at top Burberry doors, including the brand’s new Regent Street flagship here, and at selected retailers worldwide, the company said.

“The Britain collection is something that we have been working on for a long time and, like everything at Burberry, this watch has craftsmanship at its heart but is wrapped in functionality and innovation,” Bailey told WWD.

Bailey said Burberry wanted to come up with a watch that was functional and timeless, but one that also felt modern. “The trenchcoat is the inspiration and starting point for so much of what we do at Burberry — and many aspects of The Britain nod to the trenchcoat in some way, from the D ring, which is reflected in the shape of The Britain, to the trench color palette, which is woven throughout the collection,” he said.

The Britain has a rounded octagonal shape with custom-designed bolts around the brushed and polished steel bezel. It boasts trench-colored Super-LumiNova arms, and Swiss-made self-winding mechanical movements.

A domed, transparent case back magnifies the movements and is meant to showcase the watch’s inner workings and craftsmanship. The face is covered in sapphire crystal, which is antireflective and shock and scratch resistant.

The straps are made from hand-stitched alligator or rubberized crocodile, in a color palette of trench, brown and black. Bracelet bands come in stainless steel with brushed and polished surface combinations.

Mario Testino has shot the black-and-white ad campaign, which features an all-British cast, including the musician Rob Pryor, the actress Gabriella Wilde and the art dealer Harry Scrymgeour. “What is really exciting is that The Britain will be launched via a dedicated interactive online mobile experience,” said Bailey.

The campaign will launch globally online and in November print issues across markets including the U.S., U.K., Italy, France, Hong Kong, China and Korea.