Rap sensation Kanye West will take over Cipriani on Wall Street for a party hosted by Casio tonight. 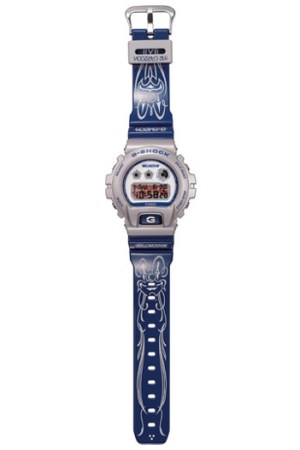 When Shigenori Itoh first came to the U.S. in the fall of 2007, as vice president of Casio’s timepiece division, one particular magazine cover struck his eye. It was the August/September issue of Complex, and smack on the front was a grinning portrait of Kanye West wearing a pale silver jacket and a bright blue tie. The Casio exec, however, homed in on a specific detail: West’s bold pink watch. “He was wearing G-Shock,” Itoh recalled, through a translator. “At that time, I had heard of Kanye West, but did not know he enjoyed our brand.”

Fast-forward to today. Tonight the singer will take over Cipriani on Wall Street for a party hosted by Casio to celebrate upcoming products and collaborations. It’s the second time West has headlined one of the company’s events: Last year, he helped fete G-Shock’s 25th anniversary at Guastavino’s. The fact that the watchmaker should pull in so big a performer again, especially for what amounts to a glorified press conference, speaks to the event itself — there’s a lot of news to announce.

For starters, Casio’s new shop-in-shop at New York’s Tourneau flagship opened Friday, its first such retail outpost in the U.S. And come September, Casio will finally introduce its G-Shock Mini collection, the scaled-down women’s counterpart to the main men’s offerings, to the U.S. market. Three models, priced at $95 each and launching exclusively at Bloomingdale’s, will be available in pink, white and black resin. “There are many features in this watch that make it one of the toughest in the world — vibration, shock, mud and water resistance — but it’s still chic and feminine,” said Itoh. Also tonight: the worldwide debut of Casio’s G-Aviation and G-Rescue models. Details for the latter include supersize buttons — the largest in G-Shock history — and for the former, a watch face reminiscent of cockpit flight instruments.

Then there are the collaborations. Casio has teamed up with hip-hop producer and rapper Redman, tattoo and graffiti artist Mister Cartoon and professional skateboarder-turned-photographer Todd Jordan on a series of limited edition G-Shock watches, to retail for $120. The Redman-designed timepiece is a bright crimson — natch; Mister Cartoon’s version includes an edgy clown graphic, while Jordan’s model is streamlined, two toned and minimal.

And these are just the U.S. announcements. Tonight’s bash is one of a number of global “Shock the World” promotional stops. The 12-city tour began in London in June and will conclude with a party in Tokyo in December. Each country boasts its own artist G-Shock collaborations and launch performer. “It’s important for us to keep the brand awareness,” said Itoh. “And this is a good time to expand because the buying power is still there despite the economy.”

Indeed. According to Itoh, sales for Casio’s G-Shock division grew 1.5 times in the past year. “G-Shock is recession proof,” he says of the line, which boasts wallet-friendly prices of $500 or less. “In the late Nineties in Japan, for example, we expanded our brands the most when we were right in the midst of a Japanese recession.”