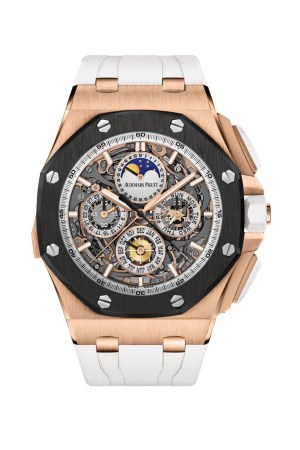 GENEVA — After record sales and earnings last year, Switzerland’s leading watchmakers are entering 2013 with broad optimism — while acknowledging economic wobbles in China could yet spoil their party.

Gathered for the Salon International de la Haute Horlogerie — one of the watch industry’s two annual showcases — 16 top brands toasted a bumper 2012 thanks to booming sales in Asia, a strongly reviving U.S. and signs of recovery in even troubled Europe.

But concerns about China cast a shadow, particularly after Compagnie Financière Richemont, the luxury goods powerhouse behind most SIHH exhibitors, released figures on the opening day, which revealed that Asian growth had slowed in the final quarter of last year. While group revenues climbed 9 percent, revenues in Asia-Pacific, now the group’s single biggest region, remained flat when adjusted for currencies.

Richemont’s results put a damper on what should have been a celebration. Swiss watch exports for the first 11 months of 2012 — the only industry-wide figures available — jumped almost 13 percent to nearly 20 billion Swiss francs, or $21.53 billion at current exchange — a record in what many had feared would be a tricky year. Last month, Richemont’s rival Swatch Group said 2012 sales leaped by 14 percent to more than 8 billion Swiss francs, or $8.61 billion — a new record and well ahead of market expectations.

Concerns about China are overshadowing the industry. François-Henry Bennahmias, the new head of Audemars Piguet, one of Switzerland’s few remaining independent watch brands, was particularly cautious.

“I’ve just come back from Asia, and I’m seeing a lot of inventory at many brands,” he said.

In a rare move, influenced by the impact on brand values of the steep discounting of the 2008-09 crisis, Bennahmias has offered to buy back retailers’ surplus stock. Audemars Piguet will also hold production this year at 31,000 pieces. “It’s like looking at yourself in the mirror. We’ve been putting on weight; now we need to go to the gym,” he said.

Rivals suggest such radical action is specific to the brand. Audemars Piguet’s former chief executive officer, Philippe Merk, departed for unexplained reasons last year and Bennahmias, former head of North America, stepped in as interim ceo. He is being formally promoted this year.

Other brands remained more upbeat, while admitting sales may no longer achieve the breakneck pace of 2012. “We still have a lot of growth potential in Asia, including China. Don’t forget — single-digit growth rates are perfectly respectable, particularly after the amazing increases we’ve seen before,” noted Nicolas Bos, ceo of Richemont’s Van Cleef & Arpels.

With a view of innovation, Van Cleef used SIHH to unveil its Enchanted Ballerina ladies watch, inspired by Russian dancer Anna Pavlova. The model, retailing for $141,000, uses an elaborate mechanism to adjust the skirt of the ballerina depicted on its dial to show the time.

Having just taken over at Cartier — Richemont’s single biggest brand by sales — new ceo Stanislas de Quercize was wary about making predictions. Formerly head of Van Cleef and before that of Cartier’s U.S. operations, he may also have been influenced by the fact that Cartier’s longtime boss, Bernard Fornas, has been promoted to Richemont’s joint ceo — a powerful figure to be looking over one’s shoulder.

De Quercize told WWD about how Cartier would develop. “We want to continue the Cartier values of powerful and genuine design that have made it a reference in the industry,” he said.

He admitted 2013 would be unpredictable, but added: “What is certain is that our clients, both male and female, are looking increasingly for long-term value. What is growing is the expertise of the clients; that’s particularly appealing to a company like ours, with its values and heritage. Our response is the 113 new creations we’re showing at SIHH.”

Innovation is also key at Richard Mille, the high-tech watch brand named after its founder. While output is a fraction of powerhouses like Cartier, independently owned Richard Mille specializes in complex pieces and mechanistic designs using radical new materials.

Mille’s Nadal limited edition, named after Spanish tennis star Rafael Nadal, had already made waves in its first version because of its light weight and ability to resist shocks. The “New Nadal” shown at SIHH takes those qualities further, with a total weight, including strap, of just 19 grams and a movement suspended on hair-thin cables to improve shock absorbency. Priced at $600,000 each, the 50 units being made are “all sold,” said Mille. “By the second day of the fair, we’d sold virtually everything: it’s unbelievable.”

Such breathtaking prices haven’t hindered growth. Richard Mille’s revenues rose by 20 percent last year, while production this year is forecast to edge up to 2,700 pieces from 2,552 in 2012.

Crucial broadening of the range also features at Ralph Lauren watches, the venture created over a private dinner between the designer and Johann Rupert, Richemont’s chairman and guiding light.

Now entering its fifth year, the Geneva-based venture showcased its first model with a tourbillon. Priced at $55,000, the RL67 Tourbillon — part of the brand’s Safari Collection — combines one of the most challenging technical attributes in watchmaking with the classical appearance but casual elegance of the established Safari range.

With the U.S. economy now in convincing, if gradual, recovery mode, some brands are calculating sales in North America could take up the slack from a possible slowdown in China. “America started coming back 18 months ago at least. The USA is definitely back,” said Jérôme Lambert, ceo of Jaeger LeCoultre, one of Richemont’s most prestigious brands. “The Americas as a whole are developing very nicely.”

Lambert played down concerns about China, as long as executives understand the dynamics of Chinese consumption. “Our Asian clientele remains highly active. But it’s true the business model is evolving — why should watches be unlike other consumer goods?” he asked.

That means China’s increasingly globe-trotting consumers will buy ever more products abroad, where prices are generally cheaper. Watchmakers will have to react. “Chinese consumers are becoming ever more sophisticated. They are traveling more and more, so of course they are adapting the way they buy goods,” said Lambert.

Executives at SIHH proposed different strategies to adapt. For Philippe Leopold-Metzger, ceo of Piaget, sharpening logistics is key. “China is very important, or, better said, the Chinese consumer. One of the greatest challenges we face is getting the logistics right,” said Leopold-Metzger. “My feeling is that Chinese consumers will continue to fuel the market, but not necessarily on the mainland. There’s already lots of buying by Chinese tourists in Europe. As visa restrictions are eased, there will also be more, including in the U.S., where Chinese visitors are undoubtedly contributing to the rebound.”

Apart from ensuring the right product is in the right place at the right time, Piaget is refocusing on its feminine, jewelry side. Its new Limelight Gala ladies watch, available in two sizes and starting at 29,000 Swiss francs, or $31,216, exemplifies what Leopold-Metzger calls a design philosophy combining creativity and relative simplicity.

By contrast, Montblanc, Richemont’s more midmarket watch brand, whose models partly reflect the famous Meisterstuck pen of the Twenties, is stressing value. A relatively early entrant to China, the company now has about 100 outlets, split between wholly owned and partnerships.

The country has become Montblanc’s single most important market — not surprisingly, considering so many of its watches, writing instruments and leather accessories are given as presents or tokens of appreciation. “It’s true that in some areas we had a more difficult time in 2012,” acknowledged ceo Lutz Bethge. “Whether that will continue or not, I can’t say.”

Emphasizing innovation is also favored by Roger Dubuis, the specialist upmarket brand bought by Richemont in 2008, which is gradually raising production to a planned 4,500 units this year. Jean-Marc Pontroué, another of Richemont’s new generation of brand bosses, unveiled the company’s flagship Excalibur Quatuor Silicon — a 1 million Swiss franc, or $1.08 million, limited edition of just three pieces, incorporating no less than four balance springs, 590 individual parts and making unprecedented use of silicon — a lightweight but extremely hard-wearing material making an increasing impact in top-end watches.

Beefing up distribution is the strategy at Parmigiani, the independent watchmaker bankrolled by Switzerland’s Sandoz family foundation. Having initially concentrated investment in production capacity and technology — the company makes its own movements and is one of very few not dependent on Swatch Group for springs — the emphasis has switched to selling, explained ceo Jean-Marc Jacot. “Last year, we opened three new stores in the U.S.” he said.

“We set ourselves a 15-year timescale to establish a significant brand. Some 12 have passed. Understandably, the initial focus was on manufacturing. Now the products are recognized and respected, so the focus is shifting to distribution and marketing,” said Jacot.

Juan-Carlos Torres, ceo of Vacheron Constantin, another Richemont brand, is also beefing up distribution — notably in the U.S. In December the company opened a second boutique, this time in Orange County’s South Coast Plaza, to create a West Coast presence to complement its Manhattan flagship. A Beverly Hills opening has just been revealed, and Miami should follow in 2014.

“There are brands which react, and there are others that have a long-term strategy: we’d always been planning to put a special focus on the U.S. this year,” said Torres.

Amid all the concerns, some claim the concerns about China are exaggerated. “The slightly softer-than-expected growth patch seen in October-December sales was more to do with the timing of the Chinese New Year, as well as potentially too much inventory in some parts of the greater China region,” argued Jon Cox, sector analyst at Kepler Capital Markets in Zurich.

Whatever the debate, no one doubts the long-term potential of the world’s most populous nation. Georges Kern, ceo of IWC, made a point of avoiding market predictions. “But you tell me: you have a country of 1.35 billion people, with more than 100 cities of more than one million inhabitants: these are realities you just can’t ignore,” he said.

Those seeking greater clarity for 2013 will have to be patient. Data for December’s Swiss watch exports, including breakdowns by country and full-year 2012 statistics, will only emerge on Feb. 5. And for the most representative sense of how 2013 is panning out, observers will have to await Baselworld — the big, Swatch Group-dominated watch and jewelry show that is Swiss watchmaking’s second core event alongside SIHH.

Pushed back slightly this year to late April to accommodate a major expansion of Basel’s trade fair site, Baselworld should provide the complement to SIHH for those seeking a real finger on the pulse of Swiss watchmaking in 2013.