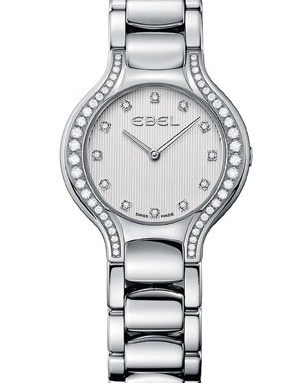 Like the caviar that bears its name, Ebel’s redesigned Beluga watch epitomizes luxury.

The timepiece, which is a signature style of the 97-year-old Ebel brand, is an updated, extravagant version of its former self, featuring a larger face, integrated crown and refined bracelet link.

The team behind Ebel, which Movado Group Inc. bought in 2003, felt the piece was due for a facelift.

“Beluga remains one of the most recognized pillars of our collection,” said Steve Cohen, Ebel’s president of the Americas. “And we thought it was time for an update. Over the last several years, we’ve seen a trend toward larger watches and diamonds, and while diamonds used to be perceived on ‘evening only’ watches, it’s now an everyday accessory in a woman’s wardrobe.”

Introduced in 1985, the Beluga watch always has been about the bling. It was one of the first timepieces on the market to fuse steel and diamonds. Ebel made sure that the DNA of the watch has not been lost in its redesign. It maintains its iconic design by combining such materials.

The updated Beluga will launch at Baselworld and hits international doors in the spring. The price range has risen slightly, now selling for $5,950 to $19,900, up about $150 from last year’s models. Where Ebel had produced a plain bezel style in seasons past, the new watches all feature diamonds.

At the heart of the collection is the Beluga Caviar, made entirely of white and black diamonds with an onyx-studded dial and stingray strap. Only 10 pieces will be sold worldwide at about $58,000.

With its luxurious look and use of precious materials, the Ebel brand is establishing itself as a luxury player.

“We are elevating Ebel into the global marketplace of luxury brands,” Cohen said. “And women love diamonds. No one is afraid to wear a steel-and-diamond watch with jeans anymore.”

In addition to the relaunch, Ebel’s initiatives include expanding the brand into other international markets, namely China and Russia. It is also pushing into the men’s watch arena for the first time by updating its points of sale with more gender-neutral displays.

One piece of signage appeals to men and women — that of Gisele Bündchen. The model has been featured in the brand’s national advertising campaign since 2006 and, Cohen said, embodies the same attributes of the Ebel brand: timeless beauty and style, confidence and success.

Ebel is just one example of how Movado Group is moving up the luxury ladder. Last year, the Paramus, N.J.-based company relaunched its Concord label. The reinvigorated brand was introduced at the 2007 Baselworld, where it introduced its C1 Collection that features the C1 Chronograph and the C1 Big Date models ranging from $9,450 to $29,900. In 2008, the brand will produce 2,000 watches for worldwide distribution in 110 watch and jewelry doors.

“We decided we needed Concord to really stand for something and we felt that it lost its identity,” said Alex Grinberg, Concord’s U.S. president. “Concord at one time had a strong identity and slowly we spread ourselves thin. We decided to change and had to really go back to our core values for what the brand stood for.”

Moving forward, the C1 timepieces will feature more advanced complications, such as retrogrades and tourbillons, aimed at attracting sophisticated watch enthusiasts. The brand also brought on Vincent Perriard, formerly of Audemars Piguet, as its global president in 2006. Perriard has an extensive history in escalating brands into the luxury arena.

“In today’s world, you have to give consumers in any spectrum a reason to desire and want your product,” said Efraim Grinberg, president and chief executive officer of Movado. “C1 does that with its unique styling and we are very proud of it. We don’t want to be biggest brand, we want to be the best.”

Back to Basel Preview
Newsletters