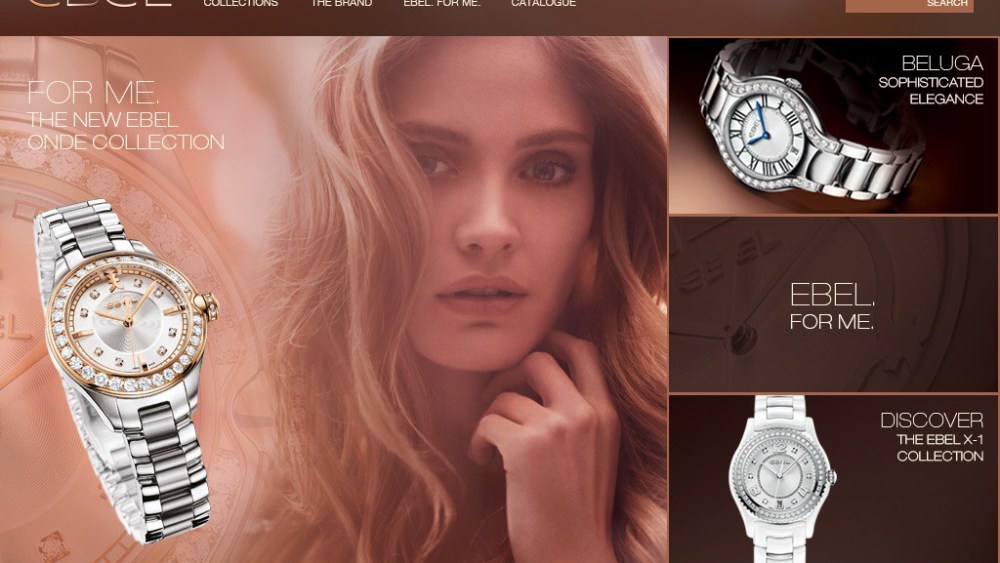 Eight years after it bought Ebel, Movado Group Inc. is relaunching the upscale women’s watch brand and adding a robust advertising campaign and e-commerce platform to its arsenal.

Two new collections, as well as the new Web site and ad push, will hit the market on Oct. 15.

While plans to revamp the women’s watch line have been in the pipeline for some time, Movado has been waiting for the right time to introduce the collections, according to Movado Group chairman and chief executive officer Efraim Grinberg.

“These watches are geared towards a younger, more fashion-conscious consumer,” Grinberg said from the company’s bright and tidy offices in New York.

“Ebel is one of the only brands founded by women,” he noted, motioning to the back of the room where the shiny, new collections were on display. “We’ve involved a lot of women in the design process.”

Founded in 1911 by Eugene Blum and Alice Levy, Ebel was acquired by LVMH Moët Hennessy Louis Vuitton in 1999 and then sold to Movado in 2004 for $47.3 million in cash. Since that acquisition, however, Ebel’s design has remained traditional and somewhat staid.

“We got a little complacent and a little boring,” Grinberg admitted. “We wanted to freshen-up the brand. The recession has been an opportunity to innovate and evolve.”

Part of that evolution has been modernizing the brand to include different materials such as ceramic and rose gold, while also riffing on Ebel’s “wave” design, which refers to the shape of the metal bands in the watches’ bracelets.

With the introduction of the X1, a sporty flagship model, and the luxe collection called the Onde (which means “wave” in French), Ebel expects the second-half of 2012 to experience 20 percent growth over last year.

Founded in La Chaux-de-Fonds, Switzerland, the Paramus, N.J.-based Movado, has a robust licensing business, making watches for the likes of Coach, Tommy Hilfiger, Lacoste and Hugo Boss. Although the firm doesn’t break down financials by brand, it posted $32 million in net income on sales of $468.1 million in 2011. A year earlier, Movado had registered a net loss of $44.9 million on sales of $382.2 million. That reversal of fortune was due in part to the introduction of the Movado Bold collection last year.

Now the company is setting its sights on making over Ebel.

According to Movado, Ebel’s X1 line is a “dressier” women’s sports watch, which includes a chronograph with diamond bezels, mother-of-pearl dials and white ceramic and rose gold bracelets. Onde is a more classic collection that is an updated version of Ebel’s signature look. While the dials tend to be larger and include different designs on the watch face, Onde incorporates a traditional aesthetic using diamonds, gold and steel. Both collections have six models, respectively.

Grinberg, along with Movado chief marketing officer Mary Leach and president of Ebel Americas and worldwide merchandising director Karen Bradbury, said Ebel is going full-force to attract women as primary shoppers of the brand. While targeting women for a women’s brand may seem like a no brainer, some watch brands tend to approach the consumer by also appealing to their significant other, usually her husband, who will buy a watch as a gift for his wife. Watch brands also tend to use famous athletes or brand ambassadors to appeal to the consumer. Ebel is using an unknown model and focusing instead on messaging.

“We didn’t want to use a spokesperson,” said Leach, who underscored that the hope is that Ebel will be viewed as a self-purchase for female consumers. “The muse is a modern, chic woman from a psychographic standpoint.”

According to Bradbury, the campaign, whose tag line is “For Me,” concentrates on the individual, not a personality.

“It’s really a 360-degree approach,” she said, pointing to the brand’s e-commerce rollout in the fall, as well as October’s print and digital campaigns.

With the addition of X1 and Onde, Ebel will have five collections in total. It will develop its men’s timepieces down the line. Currently, women’s watches make up 80 percent of Ebel’s offering, with the other 20 percent devoted to men’s timepieces. Grinberg said Movado also hopes to introduce more men’s product that, like the women’s watches, will focus more on fashion than on technical capabilities such as souped up movements.

“We’re very focused on design and the feel of the product, not complications,” Grinberg said of Ebel’s updated look. “Postrecession, we’re looking to innovate by amplifying its design quotient.”