As the steward of Movado’s legacy, Efraim Grinberg walks the fine line between guarding the Swiss watch company’s iconic and highly profitable Museum design — named for its inclusion in the collection of the Museum of Modern Art in Manhattan — and advancing the model with new materials and interpretations that will appeal to younger consumers.

The latter is evident in Edge, Movado’s latest collection, developed in collaboration with industrial designer Yves Béhar and his firm Fuseproject.

Even the name sounds modern, restless. Béhar gave the Edge a concave textured face and three-dimensional dials. The defining element of the museum watch — a solitary dot at 12 o’clock representing high noon — is raised in the Edge.

“This is the first time we’ve re-created the Museum watch,” said Grinberg, chairman and chief executive officer of Movado Group. “We’ve updated and done evolutions and embellished it at times.”

It’s no wonder Grinberg approaches alterations to the watch — designed in 1947 by Nathan George Horwitt — with a certain degree of caution.

Admirers of the timepiece include no less intimidating a figure than Albert Einstein, who wrote a letter to Horwitt saying he was impressed “with the clock you invented” and suggesting that a marker be placed at 12 o’clock, thus the famous dot. Photographer Edward Steichen, who was the director of MoMA’s photography department from 1947 to 1962, called it “the only truly original and beautiful [design] for such an object,” according to company lore.

“We have Movado loyalists who follow the brand and love the Museum dial,” Grinberg said. “We have a younger generation that wants something new.”

The Edge model is priced between $495 and $1,095, which is “about the sweet spot of the Movado brand,” he added. “We introduced the Edge on a strap because we wanted to make it accessible for consumers.”

The style, which had a “very limited” launch in the U.S. on Feb. 26, will have a global coming-out party at Baselworld 2016, running through March 24.

Even as the firm launches the visually tactile and modern Edge, Movado will be marking its 135th anniversary. Grinberg, with Béhar and brand ambassador Kerry Washington in tow, will hold court where each Movado brand will be showcased in its own area. “The Museum watch booth is three stories high,” the ceo pointed out.

The Edge’s soft launch, which features three styles for women, will be augmented with 12 new models for men and women, including satin-polished and gunmetal versions of the face, some with bronze dials. “We want to make sure demand exceeds supply,” he said.

Movado Group’s past is as colorful as the art on the walls of its Paramus, N.J., headquarters, which includes works by James Rosenquist, Armand Arman, Jim Dine and Andy Warhol.

Much of the art was collected by Grinberg’s father, Gedalio (known as “Gerry”), who fled his native Cuba in 1960 with his family and parlayed an interest in clocks and watches into a distributorship for Piaget in New York. Grinberg acquired Ebel and Concord and began manufacturing watches for licensees such as Hugo Boss. After buying Movado in 1983, he renamed his company. Today, licenses include Coach, Juicy Couture, Tommy Hilfiger, Scuderia Ferrari and Lacoste.

“My dad had always been inspired by art,” Grinberg recalled. “I guess I inherited that gene. We use the art around us as inspiration.”

The senior Grinberg collaborated with some of the artists whose works he collected. “My father met Warhol in the late Seventies,” Grinberg said. “Warhol wanted to buy a watch. My father wouldn’t sell him a watch, but he said he would trade him a watch for art.”

In 1986, the artist designed “Andy Warhol Times/5” — five separate watches linked to form a bracelet with his black-and-white photos of New York on the dial.

A case along the wall of the company’s headquarters that contains some two dozen vintage cookie jars — a fraction of those amassed by Warhol — illustrates the elder Grinberg’s affinity for the artist. Grinberg bought a majority of the collection —150 — at auction following Warhol’s death in 1987. “It was really something to remember Andy by,” his son said. “It’s Americana. [My father] had a reason for why he bought each jar.”

Another artist Movado has worked with is Rosenquist, whose Elapse, Eclipse, Ellipse watch comprises three faces that appear to melt into one another, suggesting a triple view of the Earth from space. The watch has three movements to display three time zones.

Arman’s Colour of Time has a dial with the hours represented by colored brush strokes and brushes for the hands.

Movado has also forged ties to the fashion industry. Proenza Schouler offered its take on the Museum watch in 2005 and Chris Benz in 2011 created a series of five limited-edition Movado Bold watches with the dot on each interpreted as a splash of paint.

The Bold watch family, with its “Time Energized by Color” tag line, was designed for fashion-savvy consumers. Watches come in bold hues or with subtle gradations of color on the face or band. Movado at Baselworld will launch new models of Bold Motion, its smartwatch collaboration with HP that gives notifications of incoming phone calls, texts and social media messages with a Museum dot that lights up, among other functions.

Movado isn’t the first watchmaker to jump on the smartwatch bandwagon and is, admittedly, a late to the game due to its emphasis on aesthetics. “The design of the watch comes first,” Grinberg said. “We’ll use technology when we can still make beautiful watches. It’s beautiful first, and smart second.”

The new Calendoplan, launching at Baselworld, was inspired by the original stunner from the Fifties and will be priced from $595 to $895.

Beauty is the unapologetic raison d’etre of the Esperanza, a style that marries the Museum face with an Art Deco-inspired open-link bracelet. Designed in the late Eighties/early Nineties, the style was discontinued a decade ago in spite of its being “one of our most successful collections ever,” Grinberg noted. “We updated it and are reintroducing it for today’s consumer.”

Esperanza has a slightly larger face and two-dimensional dial. Some styles come with gold-plated and stainless-steel two-toned bracelets while others are decorated with diamonds.

“Families as powerful as this can maintain their relevancy and desire with consumers through updates and product extensions,” Grinberg said of Esperanza. “Collections that follow a certain trend leave after a while. Most of our collections have a tremendous amount of staying power.” 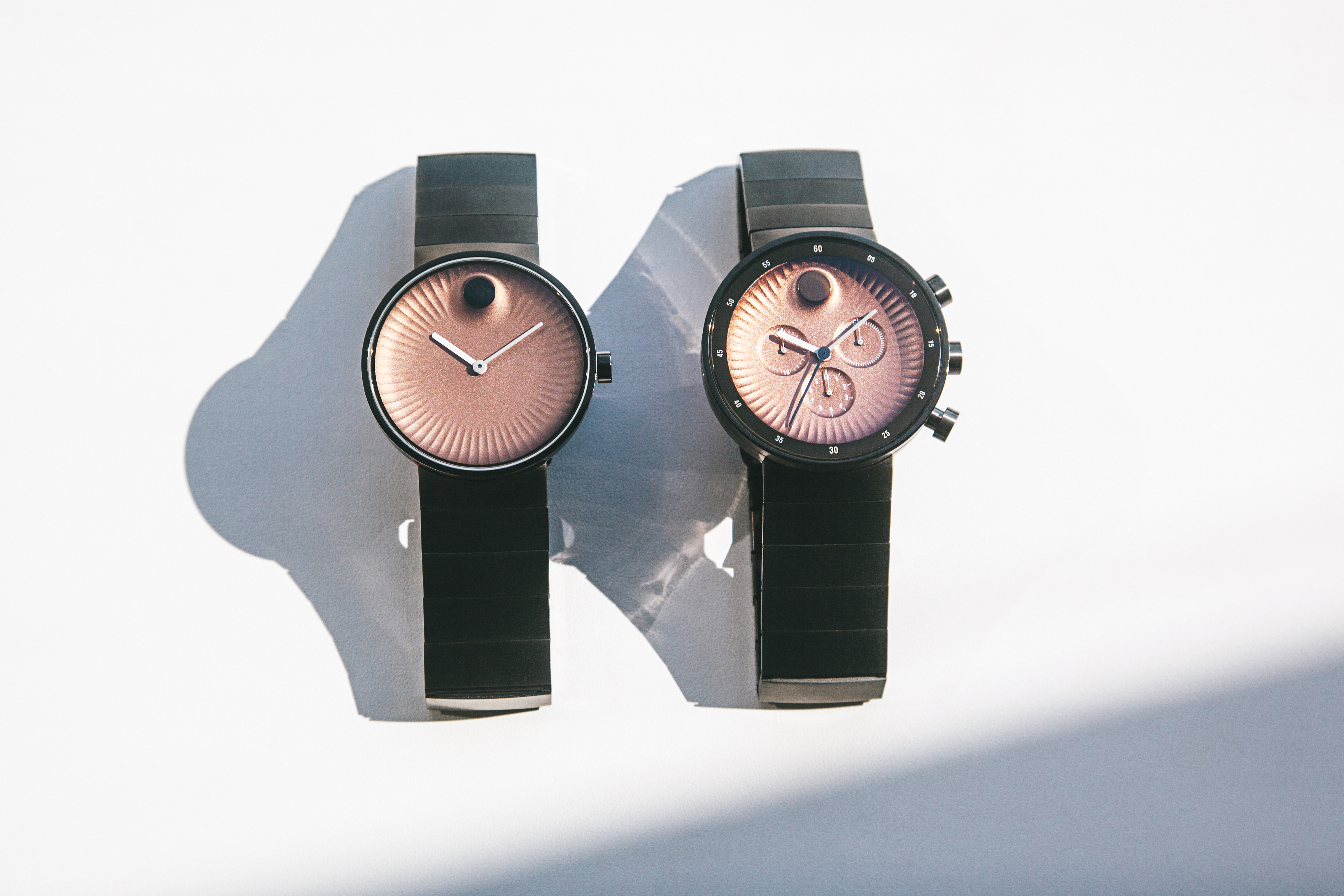