Laurence Graff, who founded the diamond jewelry firm, will launch the company’s first watch collection this evening at a private event. 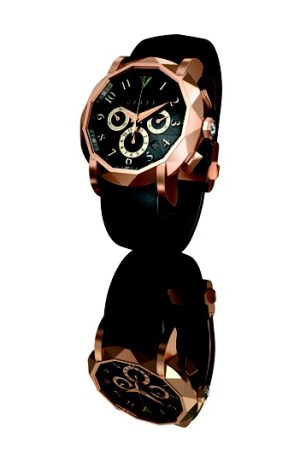 Net-a-porter, Mr Porter Team Up With Watchfinder for Used Timepieces

Laurence Graff, who founded the diamond jewelry firm Graff more than 50 years ago, will launch the company’s first watch collection this evening at a private event at Grandhotel Les Trois Rois in Basel, Switzerland, on the eve of Baselworld 2009, the watch industry’s main event.

The watch line is spearheaded by Michel Pitteloud, chief executive officer of Graff Luxury Watches. The Swiss-born lawyer has spent nearly 40 years in the watch business working for houses such as Bulgari, Harry Winston and Corum.

The watches take inspiration from Graff’s specialty, diamonds. The metal and sometimes diamond-covered cases and bezels of the round watches are faceted like a round-cut diamond with interjecting surface planes.

“We’ve had diamond dress watches and other watches in the past; however, the new luxury Graff watch collection will epitomize all that is Graff in design and excellence,” said Graff. “So it’s a collection that stands on its own — a natural progression for Graff.”

In development since January 2008, the watches are made by 10 different workshops in Switzerland, each an expert in a particular métier, from movements to straps.

“The whole idea is to have a global concept,” said Pitteloud. “It’s a full concept that covers sport watches and dress watches.”

Each watch has a diamond-tipped crown, a faceted transparent sapphire crystal case back to make movements visible and a triangular-cut emerald at the 12-hour mark on the dial.

There are five watch styles and all are limited edition. The ChronoGraff is meant for men and women, has a chronograph movement and a black leather or rubber strap that is contoured like the watchcase. The GraffStar is a more dressy watch with a star pattern in relief on the dial. The GraffSuperstar and BabyGraff are ladies’ diamond dress watches with 59 and 24 carats of diamonds, respectively. The MasterGraff, which Laurence Graff specifically requested, features options such as a bezel set with 28.8 carats of diamonds, a tourbillon carriage and a platinum case. There will only be 30 MasterGraffs made. Prices for the watches start at about $16,000.

Up next is an accessories line with writing instruments in gold and lacquer, travel clocks, men’s cuff links and a women’s jewelry collection inspired by the watches.

The watches will be sold at Graff’s network of 30 boutiques across the world this spring, including London, Monte Carlo and Kuwait, and will hit the U.S. market in June in Graff stores in New York, Las Vegas, Chicago and Palm Beach and Bal Habour, Fla., as well as Saks Fifth Avenue locations where Graff has boutiques.

Pitteloud said the company is considering a case-by-case wholesale effort starting in December to top-tier jewelry and watch doors.

On launching during the recession, in which all market segments including luxury are being hard hit, Pitteloud claims this is a relatively small project for Graff, which will only produce 900 watches this year.

“It’s small [compared] to what the watch industry is doing,” said Pitteloud. “Firstly, they are different and hard to compare to anyone else’s watches. Coming in now with the crisis with this product, our prices are not crazy — they are competitive.”

The average sale at Graff for jewelry is $200,000. The watch line gives men, who do most of the buying at Graff, additional product for themselves, as well as a lower opening price.

The company plans to advertise the watches in selected publications, including the Robb Report, WSJ. Magazine and Town & Country.

“It was the missing link in our chain of product at the moment,” said Henri Barguirdjian, president and ceo of Graff, America. “Graff has to have a proper watch line and a watch line that is very distinctive and related to the exclusivity of the Graff product itself.”