Gucci is commemorating next year's Summer Olympic Games in China in its own luxurious way. 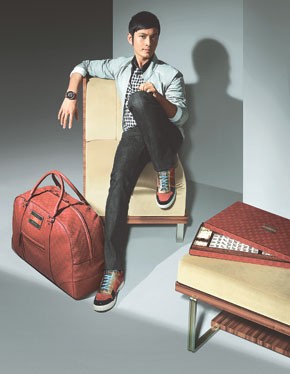 MILAN — Gucci is commemorating next year’s Summer Olympic Games in China in its own luxurious way.

Separate from any official celebration or sponsor, Frida Giannini has created a special collection called 8-8-2008 Limited Edition that encompasses eight exclusive accessories with a sporty bent. The Olympics kick off in Beijing on Aug. 8 and eight is the lucky number in Chinese culture.

The collection’s icing is the new I-Gucci watch, retailing for $1,415, which is the brand’s first digital timepiece. It features a clean black face, also available in a clock hand format, a steel frame and a cherry red rubber strap engraved with the Gucci logo on the outside and internally embossed with the interlocked G motif.

Except for the watch, which will roll out worldwide, all the other 8-8-2008 Limited Edition items will be available only in Gucci stores in China, Hong Kong and Macau, starting in January. The initiative is a testament to the importance and potential China has for luxury goods brands.

The project also includes a $3,420 bicycle, with bold red double-G leather details, and other collector’s items such as a mah-jongg game set covered in red La Pelle Guccissima leather and a soft leather panda teddy bear that pays homage to that iconic Chinese animal.

“Not only does red evoke happiness and celebration, two emotions that couldn’t be more appropriate to describe the excitement brought by the international sport games, but it also happens to be a very fashionable color for 2008,” Giannini said.

She also crafted two pieces of luggage in La Pelle Guccissima, a sturdy duffel bag and a soft messenger-style bag with Gucci’s iconic green-and-red ribbon, as well as a pair of men’s and women’s sports shoes fashioned with a patchwork of suede, patent leather and a gold trim. Last but not least, to accessorize a casual look, there’s a sterling silver and enamel necklace inspired by military tags.

An ad campaign shot by Chinese photographer Feng Hai and featuring young actor Huang Xiao Ming is also part of the deal. The portrait-style images that break in the February issues of magazines were shot in a studio in Hong Kong and will circulate in the same markets as the 8-8-2008 Limited Edition collection.