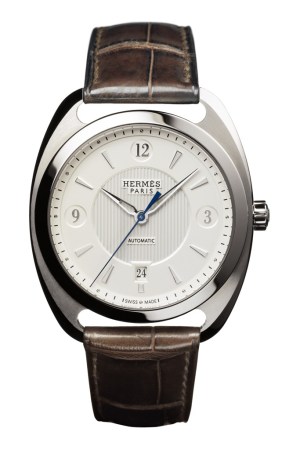 PARIS — As it celebrates a century of watchmaking, Hermès is striving for greater independence by securing its supply of movements and components.

This story first appeared in the March 8, 2012 issue of WWD. Subscribe Today.

At this year’s Baselworld trade show, the French luxury brand’s watch division, La Montre Hermès, will present a revamped version of its Dressage watch, equipped with an exclusive caliber produced by Vaucher Manufacture, in which it holds a 25 percent stake.

With a 23 percent rise in sales last year, the watch division was one of the top performers at Hermès, which saw revenues increase 18.3 percent overall in 2011. But La Montre Hermès chief executive officer Luc Perramond said it could have done even better, were it not for a shortage of key pieces.

“Like many other brands, we are suffering from the lack of production capacity at some independent suppliers,” he said.

The market for watch parts has heated up as demand soars in emerging markets, creating production bottlenecks throughout the industry. The prospect of Swatch Group further lowering its supply of watch components has accelerated the trend for luxury players to snap up their suppliers.

Earlier this week, La Montre Hermès revealed it is in discussions to acquire Natéber SA, a high-end watch dial manufacturer based in Switzerland. This follows September’s purchase of a 32.5 percent stake in Swiss watch case maker Joseph Erard Holding for an undisclosed sum.

“The strategic components are essentially cases, dials and needles, and then the movement obviously, so those are the key areas for action. We are observing and analyzing the situation upstream to identify opportunities and determine what we need to do to guarantee our growth,” Perramond said.

The executive was confident about prospects for 2012, despite continued worries about the European debt crisis.

“While I think we must remain fairly enthusiastic and optimistic, there are no grounds for euphoria. We are keeping a very close eye on European markets, which will inevitably suffer from the dramatic macroeconomic and financial situation in Europe,” he said.

“But we are fortunate to have today two very strong motors for growth: the United States, where Hermès watch sales rose 50 percent last year, which was tremendous, and Greater China, obviously, which continues on a very healthy growth path, even if growth rates there are also going to slow down,” Perramond added.

Hermès last month reiterated its medium-term target of posting a 10 percent annual revenue increase at constant exchange rates, and watches should again do better than average. “We are clearly aiming for two-digit growth, and if possible superior to the average rate expected for the group as a whole,” he said.