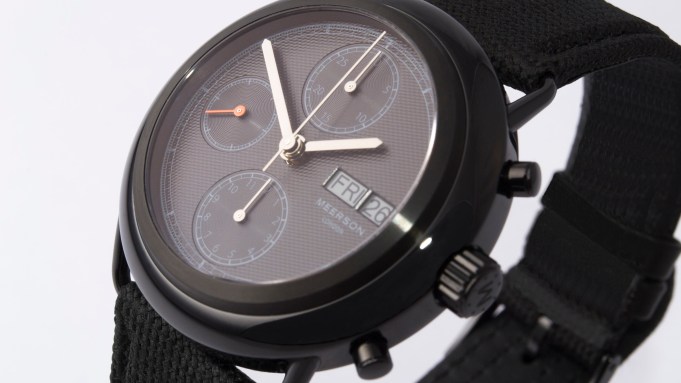 LONDON — Alexandre Meerson comes from a family of watchmakers and is the founder of a namesake British business with no retail outlets and no plans to open any. The charming Frenchman does his own marketing, while all of his watch sales come from the Meerson web site, where customers can order bespoke watches that reflect their hobbies, professions, personal histories or obsessions.

“I work in a very traditional way — Meerson watches are all handmade in Switzerland — but my goal is to bring the craft to the age of digital, and connect directly with luxury clients. And I don’t really distinguish between online and offline,” said Meerson, who flies around the world hosting events or just meeting prospective clients for a drink and a chat about what they’d want their watch to look like.

He’s happy to Skype, too, and then stays in constant contact with clients as the design progresses, sending them sketches, photos and even a film so they can listen to the first “heartbeat” of their new watch. Prices start at about 4,000 pounds.

The brand has 200,000 followers across LinkedIn, Facebook and Instagram (it has just launched on WeChat in China) which generate about a third of sales. The rest comes from face-to-face meetings with clients. Later this year, Meerson plans to launch an app aimed at streamlining day-to-day business and drawing customers closer to the brand.

Meerson’s approach may be unconventional, but there is no doubt that the boundaries between online and offline are quickly beginning to blur for many watch brands. Accustomed to treating the Internet as only a marketing tool, many high-end watch brands are casting aside their fears — of the gray market, of being perceived as mass market, of competition with discounters at airports and on high streets — and warming to the idea of selling online.

“For expensive watches, the market is still in the very early stages of evolution. What’s dramatically changed in the last 12 to 18 months is this: Two years ago, all the brands were saying they didn’t want to sell online. They believed it wasn’t the luxury environment where they wanted to be operating in,” said David Coleridge, founder of the The Watch Gallery, which he sold last year to Bucherer, Europe’s biggest retailer of fine watches and jewelry.

“Now, with the exception of a very few brands such has Rolex and Patek Philippe, every brand is for sale online.”

A former Richemont executive, Coleridge has long been a cheerleader for online sales of luxury watches. In 2016, The Watch Gallery become the first online retailer to sell Cartier watches, with the exception of Cartier.com. The Watch Gallery was also the first transactional website for most of the other watch brands in the Compagnie Financiere Richemont stable.

That was one major achievement given the reluctance of Richemont’s boss Johann Rupert to sell through third parties online.

Coleridge believes it’s the customer who’s driving the shift to online. “Everybody does all their research online. They hardly ever walk into a store having not already looked online at the various options. So it will be the customer who decides how online sales evolve,” he said.

In the meantime, Coleridge said watch brands need to develop “a strong online and offline presence. The customer will flip between the two, they will look at the watches online, and they will come into your store. They will go back online and they will buy even more, and come back into the store. At the moment online and offline are not competing with each other at all. They are entirely complementary for a retailer. If you just have stores with no online presence you will be squeezed over the next year or two.”

The big brands and conglomerates are waking up to the changing dynamic, which explains the flurry of merger and acquisitions activity in the sector.

Bucherer, which sells jewelry under its own name and stocks a host of high-end watch brands including Jaeger-LeCoultre, Girard-Perregaux and Chopard, acquired The Watch Gallery’s online and offline operations a year ago. In January, it inked a deal to buy Tourneau, the largest U.S.-based luxury watch retailer, from an affiliate of Leonard Green & Partners. Tourneau has 28 retail locations in the U.S. and a fully integrated e-commerce web site.

Just a few days before Bucherer bought Tourneau, Richemont revealed its plan to buy all the shares in Yoox Net-a-porter Group that it didn’t already own. The group plans to pay 38 euros a share and has the blessing of the YNAP board. Barring any last-minute shareholder rebellion, the deal should wrap by the start of summer.

Richemont was ready to strike: For the past 18 months or so, the parent of Cartier, IWC and Van Cleef & Arpels had been using Mr Porter and Net-a-porter as a testing ground to sell its watch and jewelry brands, launching IWC on both platforms, and later adding brands including Jaeger-LeCoultre, Panerai and Montblanc.

Last April, Net had worked with Cartier on an exclusive pop-up shop to mark the relaunch of the Panthère watch, with one design famously selling via WhatsApp two minutes after the brand hit the platform.

With a Richemont takeover imminent, both Mr Porter and Net have been pumping up their respective watch and fine jewelry offers, giving the Richemont brands — and others — exposure to high-spending fashion audiences around the world.

Analysts are mostly in favor of Richemont’s move, saying it’s a win-win play for the luxury giant and for YNAP: “Richemont should be able to speed-up its own e-commerce development with YNAP’s leading platform,” said Rogerio Fujimori of RBC Capital Markets in a note published on March 21. “YNAP’s talent/expertise to deploy capital…internally in e-commerce should continue to increase its share of global luxury sales.”

Earlier this month Net-a-porter unveiled the launch of a dedicated fine jewelry and watches hub on its site while Mr Porter  revealed a partnership with Cartier to debut a selection of Santos de Cartier timepieces.

That collection will launch online on April 5 and consists of seven pieces from the Santos de Cartier range, including an exclusive style featuring a black-grained leather strap. The Cartier launch will extend Mr Porter’s fine watch category to 16 Richemont and non-Richemont labels, including Tag Heuer and Bremont.

Elizabeth von der Goltz, global buying director at Net-a-porter, said the hub was a logical next step and a bid to appeal to the customer’s love of accessories.

“Customers trust us, especially with high-ticket items and they also love the way that we put [watches and jewelry] in a fashion context so they’re very wearable and accessible – a true accessory,” she said. “We needed a home for that online. We’re willing to bring the piece to you and have you try it on. There is that personal touch. Trust is something that is still needed.”

She added that all of Net’s personal shoppers have been GIA certified and everyone in the warehouse has been trained to do inspections and undertake quality control. “It’s really a 360 approach as you would have if you owned a jewelry store.” She said the hub would also offer services such as watch servicing and supplying new straps — what a brand or store would do.

Coleridge said partnering with a trusted online retailer is not only golden for a watch brand — it’s the key to capturing a new audience.

“With the more generalist retailers, particularly those in luxury fashion, the benefit to the brands is twofold. Sites such as Selfridges now have upwards of 120 million visitors per annum, many of whom are potential customers to the watch brands. So the site is both a great marketing tool for the brand, as well as a potential revenue source,” he said.

Meerson would agree — although he has no plans to push his watches through any third-party platforms. “You widen your reach beyond the watch lovers and talk to a new fashionista population,” he said of Richemont’s partnership with Net and Mr Porter.

Von der Goltz said Net’s customers see jewelry and watches as accessories. “Women are wearing different watches with different outfits. Shopping through us makes it easier to do that versus always having to walk into an intimidating store,” she said.

Pent-up demand is coming from other places, too, not just the fashion crowd. According to a report by the Chinese online luxury site Secoo, some 42 percent of Chinese Millennials tend to shop online, compared with 34 percent of Generation X and 28 percent of Baby Boomers.

“The much higher price tag of products such as fine jewelry and high watches still act as a deterrent to faster digital growth,” he said. “Sales remain heavily concentrated among jewelry and watch specialist retailers, accounting for 40 percent of total sales in 2017. The know-how and product expertise of traditional jewelry and watch retailers remains highly valued, especially when it comes to big-ticket items. Department stores rank as the second most important channel globally.”

Resistance to online will slowly but surely break down, Coleridge believes. At Bucherer, “we now regularly sell watches at 10,000 pounds-plus, and the most expensive sale was at 55,000 pounds.” He said that phenomenon is not hard to explain: “When you list the watch on your web site it is instantly visible worldwide, whereas when you put it in your lovely store, however busy the store, it doesn’t get the same exposure.”

The team at Mr Porter would agree. On March 21, ahead of Baselworld, Mr Porter announced it was offering one exclusive version from the new limited-edition BR-X1 Skeleton Tourbillon Sapphire watch collection from the independent brand Bell & Ross. The price tag? A cool $480,000, excluding sales tax. A new online sales record looks set to be broken.