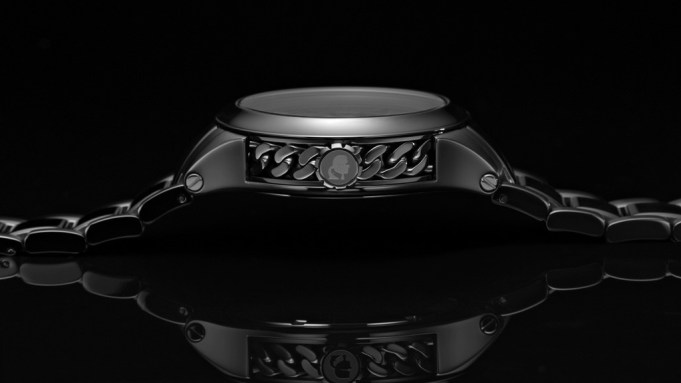 PARIS — Who better than Karl Lagerfeld — who fills his hours like no one else in fashion — to bring some innovation to the watch market?

His new collection, produced with licensing partner Fossil Inc., is to debut on Feb. 28, coinciding with the next Paris Fashion Week and the opening of Lagerfeld’s “world of Karl” store on the Boulevard Saint-Germain here.

The seven core styles include the Karl Zip, a cufflike watch that can be zipped and unzipped into several widths, transforming a timepiece in a multilook fashion accessory.

While he doesn’t consider himself a serious collector (and is more of a fashionably late type than a clock-watcher), Lagerfeld loves timepieces. In fact, he has been known to wear several at once.

“Like beautiful bracelets,” he enthused. “I love watches as beautiful objects.”

Retail prices range from $150 to $595, and watches come in an assortment of sizes and colors. The launch collection is to be housed in special packaging and sport engraved case backs.

Pier Paolo Righi, chief executive officer of Karl Lagerfeld, said the watches would launch initially in about 50 doors in North America, Europe and Asia. Retail partners will include Colette and Galeries Lafayette in Paris; Selfridges in London; Watch Station in Asia, and Bloomingdale’s in the U.S.

Righi noted the watches’ “accessible luxury” positioning would allow a fairly broad distribution, which will ramp up to about 500 doors by the fall season.

“It’s very Karl, but it is equally very approachable,” Righi said of the line. “He has been heavily involved in the development of the line. You really see his handwriting coming through.”

Righi lauded Fossil’s advanced technical capabilities, allowing, for example, a chain to encircle the casing of one style.

That there are seven styles is no coincidence. It has been Lagerfeld’s favorite number for so long that he said he doesn’t even remember the original reason. (And lucky for him that’s the address of his 7L bookstore and photo studio, located at 7 Rue de Lille.)

“What is unique about the collection is the use of mixed materials to create the unexpected juxtaposition between subtle and overt design details,” said Steve Woodward, senior vice president of licensed brands for the Richardson, Tex.-based maker of fashion watches and accessories. “The collection truly represents both the fashion accessory category as well as functional watch performance.”

He added that “unexpected closure systems” and other functional details allow consumers to “express their unique fashion sensibility.”

Righi said Lagerfeld would shortly photograph print and outdoor spots in support of the venture.

Woodward noted the campaign would also “rely heavily on digital media, focusing on building and engaging with our consumer’s social networks.”