The firm raised nearly $500,000 through Kickstarter. 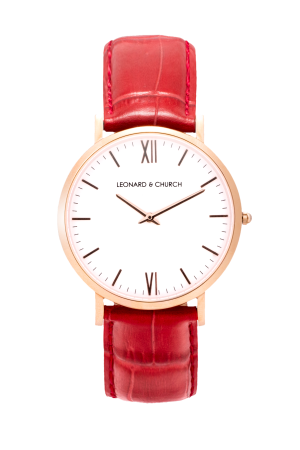 Leonard & Church, which markets its own watch brand, is the latest fashion firm to enter the democratization club.

Based in New York, with its fulfillment center in Los Angeles, the company has been in soft-launch mode after raising just under $500,000 through a Kickstarter campaign. Christopher Chon, chief executive officer of the company, and friends Jeffrey Leung and “Teen Wolf” star Arden Cho cofounded the company. According to Chon, the company secured its backers from 60-plus countries. He believes that Leonard & Church has become the highest funded watch campaign in Kickstarter history and among the top 10 funded fashion companies through the crowdfunding platform.

“I was looking to buy a nice watch. I found it supercrowded in the high and low ends, with a huge gap in the middle,” Chon said. After researching the sector, Chon said he found a “bloated” supply chain that includes middlemen, such as importer-distributors, and legacy markups that both created an inefficient marketplace and resulted in capital constraints for the manufacturer. By going direct, and partnering with professionals who produce the higher-end timepieces, Chon said his firm can create a watch comparable to brands selling for $800 each, but offer them for far less. The company’s chronograph model sells for $145, while its classic styled watch sells for $95.

Although typical watch campaigns on Kickstarter run for 60 days, the one from Leonard & Church was up for just 30 days, with an opening price of $70 for a classic styled watch.

“Because we team directly with suppliers, we are able to collapse the traditional watch supply chain and pass the savings on to consumers. Part of our value proposition is based on quality and pricing,” Chon said.

The company sources from around the world, using leather tanneries for straps from Italy and Argentina, movements from Japan and Switzerland and assembly in Hong Kong.

“Fifteen percent of the people who backed us on Kickstarter have come back to our Web site to make another purchase,” Chon said.

The current line features a narrow case that is 6 millimeters. The styles — 8 are being launched — are unisex, although a separate women’s line is expected to be available in November. The company will also showcase a pocket-watch collection for holiday.

The line ­— classic pocket-watch styling updated to include a sapphire crystal lens for scratch resistance, a Swiss movement and a leather strap — is pitched as a stocking-stuffer option. The expected price for the pocket watch is $195.

The company’s Web site became fully operational at the end of September.

Leonard & Church is part of a trend among firms seeking to democratize the fashion industry. Bonobos and Warby Parker are just two other examples of companies who have the same model where they work the supply chain to offer better quality goods and then sell direct to consumers at opening price points below their traditional branded competitors. A few also elected to get their funding start through Kickstarter, such as wearable tech start-up Leoht’s campaign to produce a women’s tote bag.