The luxury house is positioning the Seventies-inspired watch as a pillar rivaling its signature Tambour line, launched in 2002. 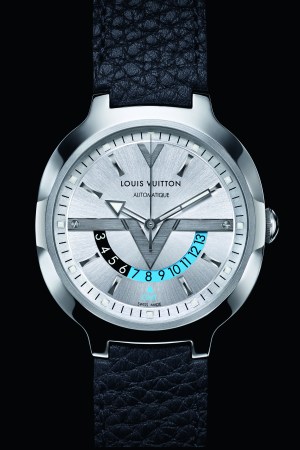 PARIS — Louis Vuitton is harking back to the golden age of watch design with the new Voyager timepiece, which the brand hopes to turn into a pillar rivaling its signature Tambour line, launched in 2002.

With its distinctive case, midway between a circle and a square, Voyager can be read as an homage to Gérald Genta, the Swiss designer responsible for critically acclaimed timepieces such as the Audemars Piguet Royal Oak, released in 1972, and Patek Philippe’s Nautilus, introduced in 1976.

“The golden age of watchmaking is what happened in terms of design in the Seventies, essentially, so it has a Seventies spirit in a way,” said Hamdi Chatti, vice president of fine jewelry and watches at Louis Vuitton. “Right away, you are familiar with this shape and want to wear it.”

The watch — the name of which evokes the title of Vuitton’s roving “Volez, Voguez, Voyagez” exhibition — features a GMT complication, in line with the house’s heritage as a trunk-maker. The dial design is based on the letter V, which here does double-duty as an arrow pointing to the second time zone.

This is also inspired by a signature: Gaston-Louis Vuitton’s stylized renderings of the house’s initials from the Twenties, which in recent years have made their way into everything from its high jewelry pieces to men’s ready-to-wear.

Chatti noted the monobloc case, featuring satin-finished sides and a polished top, made its debut on Vuitton’s exclusive Flying Tourbillon Poinçon de Genève watch in January. That was the first timepiece from La Fabrique du Temps, the luxury group’s Geneva-based watch division, to be awarded the prestigious Geneva Seal, a high accolade in the industry.

While Vuitton expects to produce only a handful of the Flying Tourbillon watches, which bear a price tag of 230,000 euros, or $262,000 at current exchange, the Voyager is a much more accessible proposition, both in terms of price and availability.