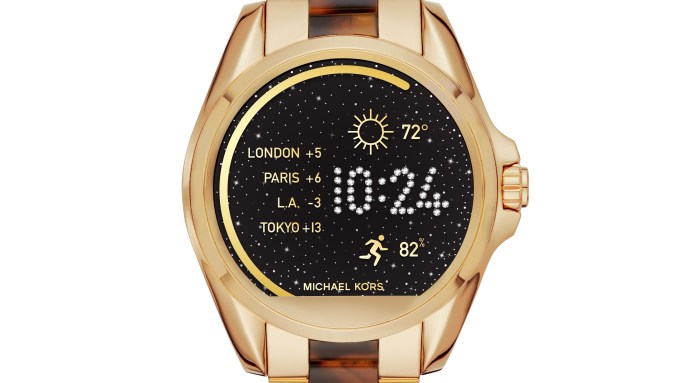 Watches have been a highly visible and popular element of the Michael Kors business for years, and today the brand introduces the next generation — and the biggest upgrade — to its fleet of wristwear: the smartwatch.

Michael Kors Access watches today become available in styles that are based on the Bradshaw and Dylan styles for men and women, with interchangeable leather, silicone or steel wristbands, and the wearer can digitally customize the watch face.

The brand announced the collection, created through Google’s Android platform, at Baselworld 2016 in March. The smartwatch is available today in 18 countries, including the U.S., as well as many major Western European countries, in addition to Hong Kong, India, Japan, South Korea, Mexico and more. A global digital and print advertising campaign will coincide with today’s launch, including a video featuring Zendaya and Martha Hunt.

Michael Kors chairman and chief executive officer John Idol said that creating a smartwatch was a natural progression for the brand.

“We know our customers are interested in style, social connectivity, ease of use and wellness,” Idol said. “We think wearables are going to be a substantial business in the future, and it’s both logical and important for us to be there.”

The watch receives notifications of incoming calls and text messages, in addition to other functions such as providing directions, calendar notifications and more. It also works with apps such as Instagram and Uber, and provides fitness tracking. The full functionality, naturally, is most robust when paired with an Android phone, but the watch does work with iPhones through an app. Wearers can use the “Ok Google” function to help find a nearby store or view new arrivals.

The Michael Kors Access smartwatch, is $350 to $395 (with $40 or $50 separate bands), and as such, is about $100 to $200 more than comparable analog styles. It is the first of the brand’s wearables technology accessories line. Trackers will be $95. Both the watch and the tracker will be available in Michael Kors stores, at michaelkors.com and some department and specialty stores.

“Some [customers] already own a tracker, but it may not match their personal style,” Idol said. “We think that many more would own a smartwatch if there were fashion-forward options. We’re the fashion leader in watches in the world, and based on this positioning, we feel that our customers are excited by the possibility of having a Michael Kors smartwatch or tracker.”

Google launched Android Wear in 2014, and in the last two years, has partnered on products from brands from Fossil, Nixon and Tag Heuer to Samsung, LG and Motorola. Smartwatches and connected accessories have faced criticism for being tech-friendly without a fashion focus, and gradually, said Google’s David Singleton, who is vice president of engineering for Android wear, that perception seems to be changing.

“The beauty is in the diversity, and we’ve certainly seen that flourish,” Singleton said. “Our mission has always been to let people wear what they want, and provide the platform to make that possible, and we’re only getting started.” Android Wear so far has partnered with at least 12 brands to create smartwatches.

Michael Kors himself said that he wears a watch every day, and although that currently doesn’t include a smartwatch, he will add the Access to his rotation. He added that watches have been a big part of the brand for years, and that with this new offering, customers will appreciate the social connectivity and health and fitness tracking.

“I think people today, especially people in fashion, love juxtaposition. They want a watch that looks like an analog, but that can keep up with them in the way that a smartwatch does,” Kors said. “We’re living in an ‘always on’ world, and this idea of connection is going to be a part of everyone’s lives moving forward.”