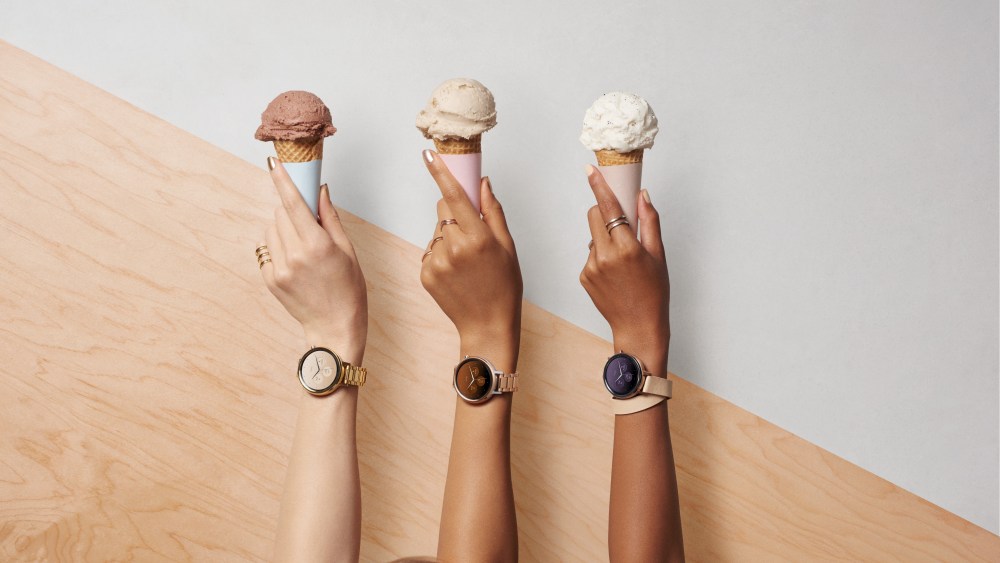 For the style set, the primary gripe against “wearables” has been that, due to lack of style, they remain largely undesirable. But if a recent spate of new smartwatches is any indication, the divide between tech gadget and fashion accessory is becoming increasingly blurred.

This week, brands including Motorola, Samsung, Huawei, Asus and Runtastic launched new smartwatches, and the resounding theme is that rather than looking like a computer strapped to the wrist, they mimic traditional timepieces, often hiding the capabilities within. Just call it a classic case of hiding smarts to look cool and fit in — beauty first, brains as a bonus.

And this, experts say, is key to the broad adoption of smartwatches, which are generally defined as digital devices worn on the wrist that do more than tell time. According to an April report from the Smartwatch Group, the smartwatch market is expected to grow to as much as $117 billion by 2020.

Smartwatch designers are making the watch look as close as possible to traditional watches, explained NewDealDesign founder Gadi Amit, who designed the Fitbit, in addition to other wearables. The idea is that, to appeal to the average consumer, smartwatches should offer a dose of the familiar. Many of the new models coming out now feature round faces — a nod, no doubt, to tradition.

“Those first watches were designed, manufactured, tested and marketed by a male engineer,” explained IDC wearables and mobile phones analyst Ramon Llamas. “So who do they appeal to? Male engineers.”

In addition to disguising their tech functionality, this new crop of smartwatches now offers a diversity that allows for self-expression that is more characteristic of fashion than technology.

On Sept. 3, Samsung revealed the Samsung Gear S2, which becomes available in the U.S. in October. The company’s first smartwatch with a round face, the look is quite a departure from previous iterations. Samsung collaborated with designer Alessandro Mendini to create a range of faces and bands to further personalize the watch.

In the announcement, Samsung executive vice president of IT and mobile global marketing Younghee Lee stated that, since smartwatches represent a more unique, personal experience than the smartphone, the partnership was an effort to deliver custom options that help users express their personal styles.

Today, fitness tracking service Runtastic, recently acquired by Adidas, introduced its first smartwatch. The Runtastic Moment is a waterproof analogue watch that tracks metrics like steps and sleep, and comes in multiple styles, colors and sizes.

Apple, which launched its Apple Watch in April, offered an uncharacteristic number of options and styles. Of those, the style set has gravitated toward the Modern Buckle, which features a leather strap more characteristic of a timepiece than a fitness tracker.

But even with those options, Amit said, as people come to see their smartwatches more as fashion accessories, Apple faces a bit of a dilemma. “Apple has had enormous success with their design language,” he said, “but will they try to blend in more with lifestyle and fashion, or will they keep it close to the original design language of the brand?”

On Monday, Google’s Android Wear introduced an app that would allow Android-powered smartwatches to pair with iPhones, opening up watches from brands like Huawei, LG and Asus to iPhone users worldwide.

Amit said because the industry is still in what is considered the first generation of smartwatches, consumers are often choosing between a more discreet design, with less functionality, or a bigger, smarter device — a conundrum probably most acute for women, who tend to wear smaller faces. But although consumers are now about to pick and choose functionality, from fitness and medical tracking to RFID and mobile payments, this will eventually change.

In its report, the Smartwatch Group said what is now characterized as fitness trackers, sports watches, conventional watches or app-based smartwatches will converge in coming years. “As we go forward,” Amit said, “these definitions will become more nuanced.”

Fittingly, as smartwatches are geared more toward the style-conscious consumer, they are being sold where people buy watches. The Moto 360 comes to Nordstrom on Sept. 16, and when Apple Watch launched, in addition to being sold at Apple retail stores, it was available in a range of stores around the world, including 10 Corso Como, Colette and Dover Street Market in London and Tokyo.

This, Llamas said, is a genius move. “At the end of the day, it’s still a watch.” And no one watch fits all — digital or analogue.