The two brands created a limited-edition capsule collection to fete their longstanding partnership. 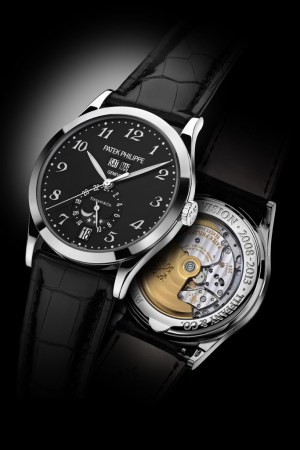 NEW YORK — Patek Philippe and Tiffany & Co. are marking their long-standing partnership with a limited-edition watch collection that will be rolled out to stores in December and January.

Tiffany, which turns 175 this year, tapped the 173-year-old Patek to create a 150-piece collection, 100 of which are men’s timepieces, and 50 of which are women’s watches. While the two brands have done business since 1851, this watch collaboration celebrates Patek’s 3,000-square-foot salon that made its debut in Tiffany’s Fifth Avenue New York flagship in 2008.

“This is our five-year anniversary, and we have not made a specific Patek watch — in the men’s, anyway — that would commemorate this kind of partnership,” Larry Pettinelli, president of Patek Philippe USA, said. “The collaboration had to be something that was interesting to collectors and also true to Tiffany’s classical style.”

After consulting with Tiffany, Patek created an 18-karat white-gold men’s watch with an annual calendar, featuring a black dial that is double-signed by both brands. The watch, which incudes a matte black alligator strap, a sapphire-crystal case and an exclusive engraving, sells for $51,500.

Retailing for $29,200, the women’s watch comes in two colors. Both styles have a tonneau-shaped case in 18-karat white gold accented with 164 round brilliant-cut diamonds. The two dial options, marked with Patek and Tiffany signatures, include a matte blue sunburst dial with white painted Roman numerals on a dark blue satin strap, or a white, mother-of-pearl dial with powdered gold Roman numerals on a vanilla satin strap.

The limited-edition watches will be available in six of Tiffany’s largest boutiques, in New York; Beverly Hills; Ala Moana, Hawaii; Houston; San Francisco, and Atlanta.

The men’s watch will hit stores in December, and the ladies’ watch in January. Both brands had hoped for a splashy curtain-raiser for the rollout, but due to the lingering effects of Hurricane Sandy, they decided to cancel their initial party. Nonetheless, Patek and Tiffany still hope to celebrate the collaboration with an event in January.

But for those with the means to snap up the a limited-edition watch, better not wait too long.

“The demand [for the watch] is well in excess of our supply already,” said Jeffrey Bennett, vice president of marketing for Tiffany. “This type of pedigree and partnership is meaningful to collectors. Patek Philippe watches are some of the finest and rarest in the world.”

The independent watchmaker creates only 50,000 watches a year, and according to Pettinelli, there’s a limited supply of annual calendars, which makes the men’s watch unique for collectors.

“We’re a family-owned company. The customer feels that,” said Pettinelli, who invited watch enthusiasts to check out its museum collection, which can also be found at Tiffany’s Fifth Avenue store.

There, fans will find rare vintage timepieces on loan from the Patek Philippe Museum in Geneva, as well as a host of watches from Patek’s current collections. According to Pettinelli, the experience is meant to be an “educational.” “Customers don’t have to feel pressured to buy,” he said with sincerity. “It’s not just about sales.”