The company's president shared with WWD his family’s commitment to remaining a private company. 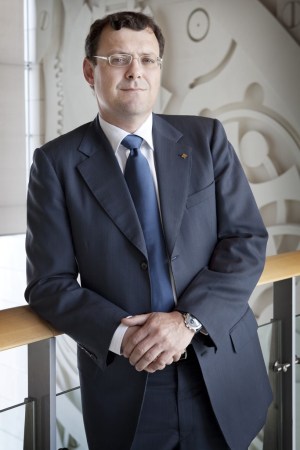 Firmly independent, the family-run Patek Philippe has been a leader in the watchmaking industry since its inception in 1839. With its expertly crafted timepieces, obsessive attention to detail and laser focus on its history, the company makes what many regard today as the finest watch in the world.

Thierry Stern, Patek’s president, shared with WWD his family’s commitment to remaining a private company, how the brand learned to listen to women and why the adage “less is more,” turns out to be true — at least in Patek’s case.

WWD: After so many years in the business, what makes Patek Philippe so well-regarded?
Thierry Stern: Patek Philippe is strong because we are maintaining the same strategy. You still need to provide the best watch in the world, to develop them, fabricate them, but you also need something new. People expect that. With every step of a generation or a family business, you need to develop new blood and some new ideas. But you should not go too far. Retailers and customers don’t expect that from Patek.

WWD: How has your vision influenced the family business? What newness have you brought to the brand?
T.S.: The line is still narrow when it comes to designing something new. When I say bring something new, it’s to bring new technology and new designs, but I’ll never do something crazy. When I started, I added some gray dials. That never existed, and my father did not agree, but today we have a lot of gray dials. You have to bring your own ideas while respecting the brand.

WWD: What else have you developed that you consider pushing the envelope?
T.S.: Another example of something that was very aggressive was to make a watch of steel and diamonds. When we started, people said, “Are you crazy putting diamonds on steel?” But today it works very well. Another thing we did is we came back with something old like a skeleton watch — it’s very traditional. We mixed it with the know-how of engraving, for example, and we added a new case. It’s about mixing something classical and new.

WWD: How has technology influenced Patek?
T.S.: New technology has allowed me to produce parts that did not exist in the past. Ultimately, though, I do not have to reinvent Patek. People don’t expect that from me, and why should I? I’m not willing to change something that is working very well. We have the trust of the client. We are enjoying it. You have to enjoy what you do, otherwise I would sell the company.

WWD: Talk about the decision to remain a private company after all of these years.
T.S.: We certainly won’t go public because then we will lose our independence. That means we will not be able to choose what we think is right or what we love to do. We definitely don’t like that.

WWD: Patek makes so few watches a year, would you ever ramp up production?
T.S.: We are increasing production, but we are not willing to increase a lot. Next year, we won’t be increasing [our inventory], and when I increase, it’s at maximum by 2 percent. More than 2 percent, we know that quality will be affected. I prefer to increase the level of complexity of the watch.

WWD: How about the price? Your entry price is around $18,000. Will you make more entry-level-priced watches, or will you make more higher-priced pieces?
T.S.: I will increase the price but also maintain entry prices. Distributors are always asking us to produce a new watch for entry prices. Lowering the price is not easy. You have to make it out of steel with a simple movement. Our cheapest movements are $18,000 to $22,000. I should try to make it even lower but it’s not easy. I would never jeopardize the quality for the price, that’s for sure.

WWD: There has been more demand for complications in women’s watches. Why?
T.S.: Today we have a lot of women all over the world asking for complications. It started in Asia. I think it started with their husbands or boyfriends, and there’s also a lot of passion in Asia. They are always looking at their watches and talking about them. It took about 10 years for us to come to this market because of the product limitations and also the size of the watch. As women gravitated toward larger watches, it became easier to make more complicated movements.

WWD: A lot of men’s watch brands will just shrink the size of their watch and add diamonds and call it a women’s watch. How did Patek make a women’s watch for a woman?
T.S.: At first we did that, too, but then women came to us and said: “Hey, we are not dumb. Don’t reduce the size of a men’s watch and add some diamonds.” My wife, Sandrine, had to take over the ladies’ watches because she understands the market. She has the know-how and that’s really important. She saw that the trend now for ladies is that they are looking for a daily watch without diamonds. That’s really a big change.

WWD: Are you targeting any regions in particular for broader expansion?
T.S.: No. We try to have a balance. If the family wasn’t controlling the company, Patek would sell 80 percent of our watches in Asia, just like everybody else does. I try to have a balance between Europe, Asia, the States and the Middle East. You need to be strong everywhere. In 2008, in the States, we had a drop of 50 percent, but we were strong in Asia and the Middle East, so it was fine Now, we’ve recovered. That’s why I’m not pushing expansion in only China like everybody. But don’t forget, I only produce about 50,000 pieces. If I was Rolex with 10 million watches, for sure I’d need to go to China to push it, but it’s not the case.

WWD: What can we expect from Patek in the near term?
T.S.: My goal in the future is to maintain the after-sale service. This is really the key for Patek Philippe. It’s expensive to buy a Patek. If you agree to pay that money, I need to be there if you have a problem.