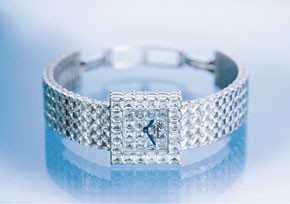 The word luxury gets thrown around these days more than the term “superdelegate.”

And with the global economy on shaky ground, so-called luxury brands are trying to redefine what it means and why, in a period of unrest, a $250,000 tourbillon is really needed.

For watch firms, that means going to great lengths for consumers, whether it’s a brand’s chief executive officer hand delivering a watch — and taking a private jet and Rolls Royce to get there; doing a custom watch, or maybe hosting a golf outing with a former President, as Audemars Piguet did last year, wooing eight VIP clients for a day of golf with Bill Clinton and pro-golfer Vijay Singh.

Piguet has partnered with Clinton, Shaquille O’Neal and Arnold Schwarzenegger on limited edition timepieces — with most of the editions sold out before they even officially went on sale.

“Limited editions are very important to our clients,” said Bennahmias. “Our customers are constantly looking for unique timepieces to add to their collections.”

Severin and Michael Wunderman, the father-son duo who own and run Corum, are centered on customer care. The pair hosts intimate dinners and art tours at the elder Wunderman’s French chateaux. They hand-deliver pieces to clients, as well. Michael, the company’s president, said of the brand’s top collectors: “They are savvy consumers who are interested in luxury buying and know what they want. Our customers are not bashful and tend to live life with an intensity befitting their lifestyles.”

Vacheron Constantin brings the factory to the clients. The 253-year-old brand, which only makes 18,000 watches a year, brought four craftsman, including a guillochet master, enameller, engraver and watchmaker, to a Beverly Hills event in which clients could try some techniques themselves. The firm also brings clients to its Geneva factory a few times a year and hosts dinners for collectors.

One hot ticket item sought after by collectors is Vacheron’s Mask watch set. Each dial of the four watches depicts a tribal mask from an ancient culture. Twenty-five sets were made and sold at a price of $441,000, but the demand far exceeded the supply.

“I could have sold four times that,” said Tornare. The average price of a Vacheron Constantin watch is $30,000, but prices can go up to $1 million.

Chopard invites top clients to its factory in Switzerland a few times a year. The firm also holds exhibitions and seminars around the country, explaining how the watches are made.

“We do extraordinary things for [our collectors], but at the same time we realize it’s a business,” said Marc Hruschka, Chopard’s U.S. president and ceo.

The company has sold two of its Super Ice Cube watches, which cost $1.5 million each. Hruschka said the top end of the business is a boon for its more accessibly priced watches.

“It’s a small percentage of our business, but one that really drives the rest of our watches,” said Hruschka. “It’s the halo for all our watches.”

Bulgari will occasionally do custom watches for its best clients. The firm is also bent on creating limited editions to entice sales. In 2006, the firm launched its first multicomplication watch with a tourbillon.

“Our most passionate watch clients are often wait-listed for rare and precious creations, such as the Assioma Limited Edition in pink gold, of which we only produced 199 worldwide,” said Bulgari ceo Francesco Trapani.

Earlier this year, Girard-Perregaux president and ceo Ron Jackson took a private plane and a Rolls Royce to the Wynn resort in Las Vegas to deliver a $625,000 Jackpot Tourbillon watch to a collector.

“In order that this watch arrived both safely and on time, I brought it over myself,” said Jackson. “The box alone cost $10,000. It’s not something you just want to hand over to the local UPS guy.”

Thomas J. O’Neill, president of HWD and chief executive officer of Harry Winston Inc., said the clients for such extraordinary timepieces — like the firm’s Opus collection that focuses on technical complications and its jewelry watches that can include hundreds of carats of diamonds — are quite specific in their desires.

“These are complicated pieces of machinery,” said O’Neill. “People who are interested in acquiring the Opus, for example, are fascinated in the engineering.”

While Winston’s die-hard customers wait with bated breath for the chance to buy a timepiece from the firm’s Opus series, which ranges in price from $250,000 to $700,000 with complications such as a resonance chronometer, tourbillon, perpetual calendar and minute repeater that sings cathedral chimes, he tries to be fair about distributing them.

“There’s a waiting list longer than my arm,” said O’Neill. “It’s a difficult thing to figure out who gets them and when they get them. We want to be able to share these complicated watches with new customers. There’s a limit to our ability to produce more pieces.”

Cartier gives access to its latest and greatest timepieces to its loyal clients. For the first time this year, the Compagnie Financière Richemont-owned watch and jewelry company will host its top collectors at Salon International de la Haute Horlogerie.

“There are more and more American collectors,” said Cartier North America president and ceo Frédéric de Narp. “In Italy, you have many more watch fans.”

De Narp talked about some of his most important customers, including one that employs someone full time to wind his 540-piece Cartier watch collection and another who has an entire room in his home dedicated to watches.

Zenith produces its watches in small quantities. The brand has created a new department called Only One Watch in which clients can get custom-made watches. The Only One watches have 350 parts within.

“I design watches for a lot of VIPs, celebrities, stars or businessmen all around the world, but hush,” said Nataf. “We want to be discreet about it.”

Discreet is the name of the game at Van Cleef & Arpels, said president and ceo in North America Emmanuel Perrin, who wants to keep the firm’s rarefied watch business just that.

“Enough is enough. You have brands calling themselves limited editions with 500 pieces,” he said. “We don’t even use the term limited edition anymore. It’s not relevant.”

Van Cleef & Arpels sold 3,500 watches in 2007 and tripled that segment of its business in that year. Some watches the company makes are limited to as few pieces in production as four or eight. The company offers complications, jeweled watches and some combining both. Prices for its watches range from $12,000 to $220,000. And — as with most of the top firms — at the top price point, the watches generally are sold even before they hit the store floor.

Back to Basel Preview
Newsletters