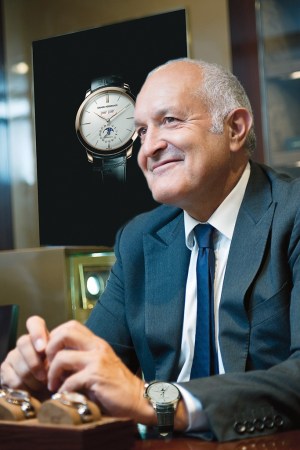 PARIS — Baselworld this year will boast not only a sea of new stands, but also a noteworthy newcomer: Sowind Group, the parent company of Swiss luxury watch brands Girard-Perregaux and JeanRichard.

Chief executive officer Michele Sofisti is arriving with a bag full of novelties, having comprehensively revamped the product assortment for both brands since his appointment in 2011. This followed the purchase of a majority stake in Sowind Group by Kering (the former PPR).

At Girard-Perregaux, the star piece is the recently unveiled Constant Escapement watch, a high-end piece featuring a new escapement design aimed at delivering unprecedented precision, which the company’s research and development department worked on for five years.

“This is more than a watch, it’s a revolution in the watch industry,” Sofisti said.

“Not only that, but for the first time, the sound of the watch has changed. Instead of the famous ‘tick-tock’ that everyone knows, there is almost no sound, so it’s quite amazing because this escapement has really changed the perception, if you will, of the sound of time.”

Girard-Perregaux, which showed at the Salon International de la Haute Horlogerie in Geneva for the last two decades, had hoped to mark its return to Basel with the unveiling of its eagerly awaited superwatch, which it has compared to a V-12, the 12-cylinder engine used in sports cars.

But its master watchmaker, Dominique Loiseau, was recently forced to take time off for health reasons, delaying work on the timepiece, which is now expected to be ready by yearend. No matter: At 222 years old, Girard-Perregaux has undergone a face-lift that Sofisti hopes will have retailers buzzing.

In the last year, it revealed partnerships with personalities from basketball player Kobe Bryant to American environmental conservationists Susan and David Rockefeller Jr., who will be in Basel for an event highlighting their work protecting the world’s oceans.

In addition, it relaunched its online home at girard-perregaux.com and expanded the site with editorial content, in the form of a lifestyle portal dubbed “Mechanics of Style.”

This spring, it will launch an ad campaign featuring images from the archive of the new Academy Museum of Motion Pictures. With its “Mechanics of Dreams” tag line, the campaign celebrates Girard-Perregaux’s role as exclusive timekeeper and founding supporter of the museum, to be located in Los Angeles.

Most visibly, the brand has been touring the planet with its exhibition “The New Face of Tradition,” showcasing young watchmakers, which alighted in Australia in March and is headed next to Japan, Russia and the Middle East. A dedicated Web site, thenewfaceoftradition.com, shows them assembling watches in locations as varied as the Brooklyn Bridge in New York and Bondi Beach in Australia. “People buy watches, but they honestly have no idea what is behind it, how much work, the small components and so on. Only by showing that in a physical way can you really get the point,” Sofisti explained.

“Visiting the manufacturer, you see a lot of younger — but very capable — watchmakers. They are in charge of tourbillons or minute repeaters, so very complicated watches. This is our future.

“We created this project, which looks into their private lives, to discover that one is a rock band musician, the other plays Swiss horn, another loves skiing, another is a champion in puzzles,” Sofisti said.

With the new communications strategy in place, he set about streamlining the Girard-Perregaux collections, reducing the number of stockkeeping units by more than half. The brand now features four collections each for men and women, including the new Hawk and Traveller men’s lines.

While the average price for a Girard-Perregaux timepiece will remain stable at around 18,000 Swiss francs, or $19,300 at current exchange, Sofisti hopes the sportier new collections, with their 44-millimeter cases, will appeal to customers in North and South America.

“The U.S. and the Americas in general are priorities for the company,” he said, noting its market share in the region is “much lower than what it should be.” It plans to develop materials like ceramic and titanium as an alternative to gold, and to use social media to engage potential clients in the region.

Meanwhile, reducing the number of sku’s should ensure better stock rotation and control, at a time when Hong Kong and Greater China, the top markets for luxury timepieces, are experiencing a slowdown.

Sales estimates for Sowind Group vary widely, ranging from $107 million to $261 million, say sources. Sofisti did not disclose exact figures, beyond saying that Asia accounts for close to 45 percent of Girard-Perregaux’s sales, with China alone representing 35 percent. He said business in Europe is “quite solid” and sales in the Middle East are growing, thanks to new distribution partnerships.

“I want to balance the weight of Asia with the Western world,” Sofisti said. “There is evidence of a slowdown in China, so I would say that we need to pay attention.”

Nonetheless, he described the inventory situation as “under control,” in part because Girard-Perregaux’s manufacturing capacity presently stands at around 20,000 units a year. Production leapt by 35 to 40 percent in 2012 and sales rose in the low double-digits, but the firm is still far from its annual production target of 40,000 units recently set by Kering chairman and ceo François-Henri Pinault. Much depends on the industry’s reaction to Girard-Perregaux’s two new men’s lines and women’s pieces, which include two new diamond-pavéd models in the 1966 collection.

But the arrival of a new range of distinctive timepieces with a Swiss-made automatic movement in this price bracket is already generating strong positive feedback from buyers, said Sofisti, adding that point-of-sale materials have been redesigned to draw attention to the brand’s new look. This should help Sowind Group weather an unstable economic climate. “I think everybody reading the news can say the economy is supershaky, and there is political turmoil everywhere, so the overall situation worldwide is not really the most relaxing,” he noted.

Then there is the added uncertainty over the impact of Swatch Group’s planned reduction of component deliveries to the rest of the industry.

Sowind Group makes movements for other brands and collaborates with fashion houses Bottega Veneta and Ermenegildo Zegna, but it relies on outside suppliers like Swatch Group for key components like dials and hairsprings. A growing portion of JeanRichard watches feature movements produced by Swatch Group’s ETA subsidiary.

Sofisti said he hoped his decade spent working with the Hayek family at Swatch Group, in addition to their good relationship with Pinault, would guarantee their continued collaboration.

“Being part of a large group like [Kering] gives a certain financial solidity, which means we give the security of our long-term work to our distribution network, our partners, the dealers. They know we’re there with our two brands and in the years to come,” he noted.