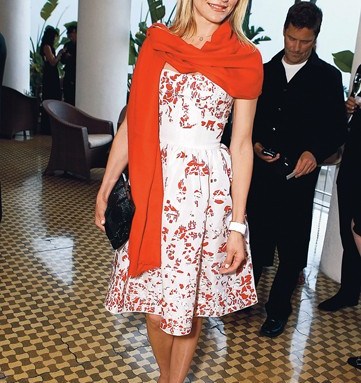 CEDRICK TRADES DOWN: Los Angeles-based jeweler Cedrick Jihanian — a favorite of Cameron Diaz, Lucy Liu, Mariah Carey and Felicity Huffman — has added lower-price styles to his 140-piece signature collection, sold exclusively at Saks Fifth Avenue. The line, which used to hover around $14,000 retail, now includes pieces starting at $4,000, such as gold and diamond hoop earrings. “I wanted more women to be able to wear my jewelry,” said the Paris native. “I grew up looking in the windows at the [jewelry stores on the] Place Vendôme, and I always wanted to design beautiful things.”

At 17, Jihanian enrolled in the Ecole de Rue du Louvres, then was hired at Van Cleef & Arpels, followed by Boucheron and Cartier. He moved to Los Angeles 15 years ago to start his own line, which is inspired by French gardens, Greek motifs and lace. The four groups in the collection — Signature, Envy, Heiress and Sparta — are made from 18-karat yellow gold, diamonds and gemstones.

SWATCH BOND: Swatch is marking the 25th anniversary of its iconic watch with a special anniversary lineup called Swatch 007 Villain Collection. The Villain range celebrates Ian Fleming’s inventiveness when conjuring up his villains, and the skill of the actors who impersonated the characters whom people love to hate.

“It’s the art of the villain that interests us, because in all Fleming’s novels and Bond films the villains play a crucial role,” said Nicolas Hayek, co-founder and chairman of Swatch Group.

All of Swatch’s styles — from the Chrono to the Irony to retro plastic timepieces — are represented in the collection. The design of each watch is intended to evoke the characteristics of each villain through its style, patterns and colors. A case in point is the molded textile strap featuring ink-blue and blood-red threaded patterns on a beige ground with polished and glossy black stainless steel links that was fashioned after a shawl worn by bad girl Electra King in “The World Is Not Enough.” Prices range from $60 to $245, and the collection will be available at all Swatch stores worldwide.

N2’s U.S. PUSH: N2, the trendy younger line of Paris-based costume jewelry brand Les Nereides, aims to amp up its presence in America. Known for its kooky, resin-based, plastic and metal-plated creations, the label, with pieces that average around $60 at retail, has signed a deal with U.S. distributor Hatch, which also represents Paul & Joe, Alexander McQueen, Disney Couture and Seven For All Mankind. Last month, a Paris concept store opened, housing the N2 and Les Nereides brands, situated on Rue Tiquetonne in the city’s second arrondissement.

GOING BIGGER IN LONDON: The economy may be tough on both sides of the Atlantic, but that hasn’t stopped two American accessories designers, Kara Ross and Mary Norton, from boosting their respective businesses in the U.K. In November, Ross, who sells her fine jewelry through Browns and her bags and accessories at Harvey Nichols, Harrods, Joseph, Matches and Net-a-porter.com, launched her first bespoke service, at Selfridges. Clients are able to have crocodile-skin bags dyed any color of the Pantone rainbow and can choose precious gemstones for the clasp. Ross also is offering bags in ostrich, lizard, python, stingray and karung. “The possibilities are endless,” said Ross. “And if clients want a ruby, emerald or sapphire on the bag, I’ll go out of my way to source it.”

Also in November, Norton gave a personal appearance at Harrods and hosted a private lunch at Scott’s in Mayfair together with Marty Wikstrom, whose Atelier Fund has a stake in Norton’s business. Marigay McKee, fashion and beauty director at Harrods, said Norton’s bags sell well at the store.

“Many of the exclusive, one-of-a-kind pieces are selling out because women love to know that no one else has the same bag,” McKee said. “The timeless Hollywood glamour of Mary Norton’s bags really appeals to Harrods customers.”

FRUGAL FASHION: The owners of popular accessories e-tailer Max & Chloe have stepped in to offer a more accessible option.

She and her partner, Arnold Kovelman, are rolling out Blu, a collection of rings, necklaces and bangles that they designed, priced at $5 to $60. The pieces use gold and silver plating, as well as enamel and Austrian crystals. After testing a few styles a couple of months ago and gradually increasing the offerings, Blu became one of the top three selling brands on the site. There will be about 250 styles at any one time.

Rubin said that given the response to the collection, she has been approached by small boutiques who want to start carrying it.

“We should be in wholesale distribution by next season,” she said. “But for us, the most important thing is to keep the collection on trend, to offer the latest looks at a really affordable price.”