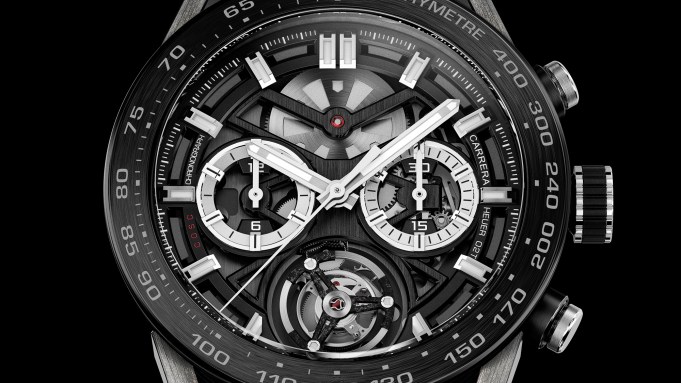 It looks like the New Normal is here to stay.

Brands getting ready for the Baselworld watch and jewelry fair face another year of dire economic conditions and poor visibility into the future.

The Federation of the Swiss Watch Industry, or FHS, forecasts Swiss watch exports will remain stable, at best, after posting a 3.3 percent drop in 2015, their first annual decline since 2009.

Negative factors that weighed on the market included the appreciation of the Swiss franc; the drop in demand from Hong Kong, the world’s top market for Swiss watches; the economic and political environment in China; tensions in the Middle East; the low level of the ruble, and terrorism, the federation said, adding, “This situation will continue to influence results for the Swiss watch industry in the first part of 2016.”

The category of watches priced between 200 Swiss francs and 500 Swiss francs, or $201 to $502 at current exchange, was hit the hardest, recording a drop of 8.7 percent in value terms in 2015, which analysts attributed to the acceleration of the smartwatch category following the launch of the Apple Watch.

Smartwatch shipments will overtake Swiss watch exports for the first time in 2016, according to a report by market research and analysis firm International Data Corp. published in December. It forecast 34.3 million smartwatches would be shipped in 2016, up from an estimated 21.3 million units in 2015.

By comparison, Swiss watch exports totaled 28.1 million units in 2015, according to FHS data.

To put those figures in context, Swiss watches accounted for just 3 percent of the global watch market by volume last year, according to another market research firm, Strategy Analytics. It estimated 1.1 billion wristwatches were shipped worldwide, the majority of them low-cost models made in Asia that cost less than $50.

As a result of the turbulent market, companies large and small are feeling the pinch. Compagnie Financière Richemont — whose brands include Jaeger-LeCoultre, Vacheron Constantin, IWC and Panerai — confirmed recently that it plans to cut up to 350 jobs from its watch manufacturing operations in Switzerland.

Swatch Group, the world’s largest watchmaker, is keeping its workforce stable, since the company expects sales growth of “well over 5 percent” in local currencies in 2016.

Bank Vontobel sees Swiss exports remaining flat this year, although it put those figures in perspective.

“For total Swiss watch exports in 2016, we forecast flat growth or a level of 21.5 billion Swiss francs [$21.8 billion], in line with last year’s level, which would still be the third-best year ever and only 3 percent behind the record year 2014,” the bank said in a report.

Thierry Stern, chief executive officer of Patek Philippe, said the maker of Calatrava and Nautilus watches would stick to its policy of having balanced distribution across territories to minimize risk. “For 2016 we are confident but careful. Our aim is to achieve the same level as 2015, which was a good year,” he said.

Baselworld director Sylvie Ritter said attendance at the fair is set to remain roughly stable, with more than 1,500 exhibitors expected. She noted a handful of cancellations from Asian jewelry brands hit by the downturn in local consumption.

“It’s not euphoria, but we are not anxious,” she said. “In general, from what I have heard, all the big brands are confident. It’s a little different for the small- and medium-sized firms that are not positioned worldwide, or that were working on markets that are performing less well.”

Among the new exhibitors this year are Porsche Design and Colombian emerald producer Muzo, which plans to bring to market more than 2,000 stones.

ETA, the Swatch Group division that produces the movements used in the majority of Swiss watches, will be back with a shared booth with battery-maker Renata, while Technomarine is set to return after a two-year absence.

Luxury brands are rethinking their presence at the fair.

Louis Vuitton said it would pass on Basel a miss after staging presentations on the sidelines of the fair for the last five years as it shifts toward presenting timepieces closer to the date they hit stores. Unlike the majority of brands at the fair, Vuitton has no wholesale activity, meaning its reason for attending was mainly to gain credibility as a watchmaking house and to garner press coverage.

“Everything we presented had to be delivered as soon as possible because we had customers who would come to the store with magazine or newspaper articles,” said Hamdi Chatti, vice president of fine jewelry and watches at Louis Vuitton. Vuitton’s sister brand Dior, on the other hand, plans to cease production of men’s watches to focus on its core women’s collection.

Burberry has decided to exit the category entirely and will allow its watch license with Fossil Group to expire at the end of its term in December 2017. It will no longer have a separate stand at the fair, though Fossil Group will continue to market Burberry watches until the end of the agreement.

“I think collectors and connoisseurs of fine watchmaking will be interested, because this watch has several features that are quite rare,” Nicolas Beau, the company’s international director of watches, said of the jumping hour watch. Chanel expects to produce 150 in white gold, priced $36,000, and 150 in beige gold, priced $34,500.

Chanel’s Calibre 1 movement is not 100 percent produced in-house, since Romain Gauthier manufactured the gear train. But Beau revealed that Chanel took a minority stake in the Swiss high-end manufacturer in 2011 to secure supply.

“We are fiercely private and independent,” he noted. “If tomorrow a hostile group bought one of our main suppliers, we have the capacity to continue our development.”

Meanwhile, specialist watch brands are tailoring their strategy to root for pockets of growth, whether by diversifying their geographic mix or angling for new customers.

Female consumers remain a prime target for many brands. Movado Group has invited Kerry Washington to join the company in Basel to mark her 10th anniversary as brand ambassador, while Frédérique Constant is set to reveal it has signed a two-year deal with Gwyneth Paltrow, its first A-list representative.

“We are also going to increase our above-the-line spend significantly. We have made a strategic decision to heavily invest in the next stage of brand awareness with Gwyneth Paltrow,” said Peter Stas, cofounder and ceo of Frédérique Constant.

Citizen will celebrate the 40th anniversary of its Eco-Drive technology, which powers watches using any natural or artificial light source, with models including the Ambiluna ladies’ style. Inspired by architect Sou Fujimoto, the watch combines materials such as frosted sapphire crystal and lacquer with prices starting at $695.

Jeffrey Cohen, president of Citizen Watch Company of America, noted the company was well-positioned being above fashion brands, which have been hit by the introduction of the Apple Watch, and below higher-priced Swiss watches.

Raymond Weil is celebrating its 40th anniversary by highlighting its ties to the music world with a special watch in its Maestro collection dedicated to The Beatles. The dial of the steel timepiece, available in a limited edition of 3,000, features the band’s logo, 13 album titles and a special “Help” index at 4 o’clock.

Tissot is taking a two-pronged approach as it seeks to rebound from a year of flat sales. The Swatch Group brand in October inked a multimillion-dollar partnership to become the first official timekeeper of the U.S. National Basketball Association, and will present branded timepieces for 11 of the league’s teams in Basel.

Tissot ceo François Thiébaud noted the U.S. accounts for only a single-digit percentage of the company’s overall sales. “The U.S. market should account for 10 percent to 15 percent of Tissot’s business in the years to come, and the NBA partnership will allow us to grow rapidly,” he explained.

The firm will also make a fresh stab at the smartwatch category after shelving the prototype it showed last year, which linked to a Bluetooth outdoor weather station.

“When we saw that interest was limited, we decided there was no point launching production for a few hundred or thousand units — well below the quantities Tissot is used to making. We decided to go back to the drawing board and we are making a connected watch which is more in line with people’s wishes,” Thiébaud said.

No details have emerged so far concerning the new Tissot Smart-Touch, but the executive suggested it could include a payment function and provide directions.

Although smartwatches are expected to be less of a hot topic at Baselworld than they were last year, anticipation is running high for the Tissot watch, as Swatch Group has yet to produce a serious contender against the Apple Watch.

Meanwhile, Tag Heuer has struggled to cope with demand for its Connected watch, delivering fewer than 15,000 units in the three months since it was launched in New York, according to Jean-Claude Biver, head of the watch division at parent company LVMH Moët Hennessy Louis Vuitton.

“I underestimated demand, because we budgeted for 20,000 and now we [have orders for] 80,000 [for the first year], so we’re backed up. That’s why we are having problems with deliveries,” he explained.

Tag Heuer is building a new unit with Intel to assemble microprocessors in Switzerland and by next year, it expects to ship 200,000 of the $1,500 Connected watches and to introduce a second version with a smaller case better suited to women — all without cannibalizing its higher-priced lines.

“The Connected watch is not replacing our traditional models. It’s a different kind of customer. A lot of these buyers are people who would never have bought an ordinary Tag Heuer,” Biver said.

He is confident the brand will outperform the industry again this year after logging growth of close to 3 percent in 2015, due in part to the decision to lower prices by an average of 15 percent.

Fossil Group saw sales decrease by 8 percent in 2015, but positioned itself to take on Apple with the launch of its Q Founder smartwatch in the fourth quarter and the acquisition of wearable technology company Misfit in November. The group plans to roll out more than 100 connected devices this year. It will also relaunch diving watch specialist Zodiac with mechanical movements only, according to Martin Frey, managing director of Fossil Group Europe.

Fossil Group, which will unveil its new seven-story EMEA headquarters in Basel, has increased its capacities in recent years to assemble mechanical movements and manufacture cases in Switzerland. However, the slowdown in Swiss watch exports meant the group failed to reach its target of producing 200,000 movements in 2015. While declining to disclose the final figure, Frey said Fossil Group expects to manufacture between 150,000 and 200,000 movements in 2016.

“Cautious? Let’s say we are realistically optimistic,” he said.